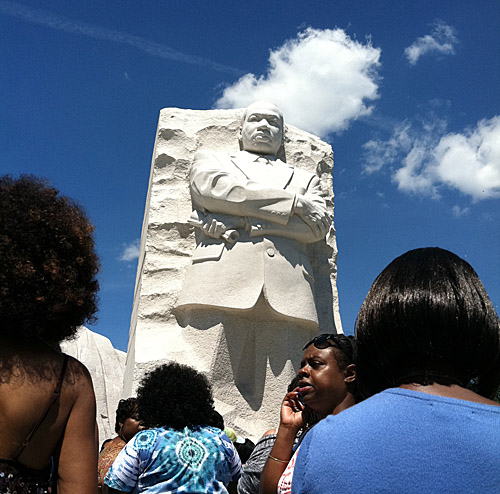 I had a chance to check out Washington DC’s new Martin Luther King memorial earlier this week. A big opening ceremony featuring President Barack Obama and other significant guests scheduled for this weekend has been postponed for an approaching hurricane, but the memorial is open to visitors, and I found a large and enthusiastic crowd on the day I dropped by.

I was surprised — maybe I shouldn’t have been? — that nearly everybody besides me who came out to see the memorial was African-American. This points to a disappointing fact I’ve observed before: even though Martin Luther King has now been enshrined in American history as a legend, a hero and a cliche, his great universal message of activism through nonviolent resistance remains largely neglected and misunderstood in America and around the world. The King approach to solving problems feels every bit as startlingly innovative and unique today as it did in the 1960s. The miraculous fact that King’s patient, compromise-based approach can actually succeed in solving “unsolvable” conflicts remains widely ignored, even though the problems we face today are as severe as the problems King faced so brilliantly and successfully in his time. Most people would rather gripe, whine and fight each other than take a risk on loving their neighbors and trying to truly understand and cope with variant points of view.

Martin Luther King never had an easy time getting his peaceful message across. It’s well known today that he and his fellow activists had to endure vicious taunts and provocations by their opponents, but King also took a hard beating, often for different reasons, in the allegedly liberal mainstream media, and another hard beating from many of his fellow African-American activists. Like any leader who tries to compromise and rise above the pettiness of simple hatred, he took it from the left and the right, from black and white, from north and south. An early John Updike short story called “Marching Through Boston”, published in the New Yorker in January 1966, delivers a refreshingly direct look at how Martin Luther King was seen in his own time.

“Marching Through Boston” presents the Maples, Updike’s recurring married couple, attending what must have been this April 1965 Boston rally (the precise level of detail suggests that Updike must have attended the Boston rally himself). As in so much of the pointless drama surrounding black/white relations in the USA, this short story turns on sexual politics, and the joke here is on the white male. Richard Maple watches with open jealousy as Joan Maple gets drawn into King’s large circle of activists. She travels to Alabama alone to attend a rally, and then Richard joins her when King arrives to lead a march in their own home city. His weak protests throughout the story help us understand what the Harvard-educated/upper-class line against Martin Luther King was during the height of the civil rights struggle: King was a phony, a performer. “Didn’t it seem corny, and forced?” Richard Maple complains to Joan after they hear King speak in Boston. “Somewhat,” Joan replies. “But does it matter?”

This is a wonderful, sensitive story, but Updike’s comic riffs on King as voiced by his fictional surrogate Richard Maple can seem nearly offensive today. Richard, indulging himself in a state of feverish exhaustion after the long march through Boston, finally lets his frustration out in a tirade to Joan:

But he found he could not stop, and even after they reached home and she put him to bed, the children watching in alarm, his voice continued its slurred plaint. “Ah’ze all right, Missy, jes’ a tech of double pneumonia, don’t you fret none, we’ll get the cotton in.”

Another view of Martin Luther King in his own time can be found in Kenneth Clark’s June 1963 interview with Malcolm X. Like John Updike’s Richard Maple, Malcolm X has little sympathy for the hard work Martin Luther King is doing, and has nothing but negativity to offer:

Kenneth Clark: Reverend Martin Luther King preaches a doctrine of non-violent insistence upon the rights of the American Negro. What is your attitude toward this philosophy?

A hundred years ago they used to put on a white sheet and use a bloodhound against Negroes. Today they’ve taken off the white sheet and put on police uniforms, they’ve traded in the bloodhounds for police dogs, and they’re still doing the same thing. And just as Uncle Tom, back during slavery, used to keep the Negroes from resisting the bloodhound, or resisting the Ku Klux Klan, by teaching them to love their enemy, or pray for those who use them spitefully, today Martin Luther King is just a 20th century or modern Uncle Tom, or a religious Uncle Tom, who is doing the same thing today, to keep Negroes defenseless in the face of an attack, that Uncle Tom did on the plantation to keep those Negroes defenseless in the face of the attacks of the Klan in that day.

Kenneth Clark: But the goal of Dr. King is full equality —

Kenneth Clark: … and full rights of citizenship for Negroes.

I respect both John Updike and Malcolm X. That’s why I find it instructive to observe that even these two very smart people wasted their time complaining about the great Martin Luther King during the most critical years of his historic struggle, instead of offering their support. To be widely criticized must be the fate, I suppose, of any leader who dares to present a far-reaching program that is grounded in patience, hope, compromise, and a wide sense of respect. This rare type of brave leader will not often receive the same level of respect in return.

There’s a big granite statue of the great American hero in Washington DC today, but I’m afraid the leaders of today who attempt to follow in King’s gracious footsteps remain sadly misunderstood, and also get it from all sides.