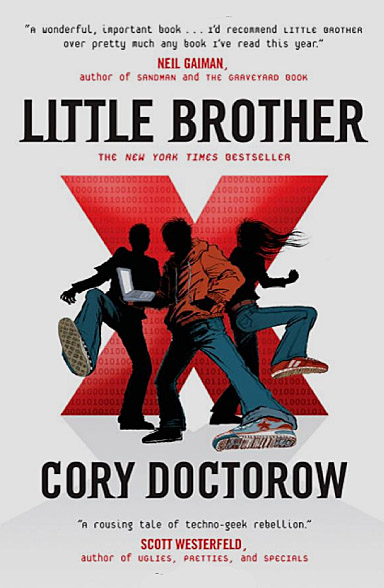 One thing you have to say for Little Brother, Cory Doctorow’s recent book for young adults (now nominated for the Hugo Award for best novel): it’s ambitious. It is an adventure story about teenage terrorism that’s also a screed on the importance and meaning of the right to privacy and a guide to bad government practices and how to fight them, a novel made manifesto and handbook.

The book tells us, for example, why anti-terrorism measures like ramped-up airplane security are bad, or how to safely destroy the RFID tag in a passport. It’s useful. It’s also pretty blatant propaganda, and it is its nature as a work of propaganda that ultimately undermines its effectiveness as a work of fiction.

In the wake of a terrorist bombing of the Bay Bridge in San Fransisco, teenager Marcus Yallow and his friends are rounded up by Homeland Security for no apparent reason and put into a Guantanamo-style prison on nearby Treasure Island. Once released, Marcus embarks upon a dangerous campaign to combat the government’s anti-terrorism efforts in San Francisco and otherwise publicly humiliate and embarrass his former tormentors. He is a “Little Brother”, fighting with tooth and nail the efforts of “Big Brother” to take away our rights and keep us all under a watchful eye.

Sadly, most of Marcus’ opponents are straw men, there to set up unconvincing arguments for the DHS’ behavior so that Marcus can wax loquacious about the Declaration of Independence and the Constitution. Authority figures like Marcus’ school principal and a substitute teacher are both sadistic cartoons; neither of them seem to care at all about the welfare of the children. This comes off as terribly disingenuous; in real life, the people who support the DHS’s more draconian measures and the Patriot Act do so because they really care about the safety of their family and children and neighbors. They honestly believe that this is what it takes to keep us safe in the post-9/11 world. The DHS agents who twice capture and torture Marcus are pure evil, without a hint not only of humanity but of personal, individual depth. Just once I would have liked Marcus’ main tormentor, “Severe Haircut Lady,” to sit down and talk about why she really believed this stuff was necessary to keep us safe, and why she really believed Marcus was playing into the hands of the enemy with his misguided and seditious behavior. I suspect that underneath it all, Severe Haircut Lady was just a scared little girl who wanted to prove to daddy that she could save the world. If Doctorow had just let that aspect peak out a little, she would have taken on a whole other dimension.

And then there’s Marcus and his friends, who seem suspiciously secure and well-adjusted for teenagers (especially for geeky teenagers who spend their free time writing computer programs and playing alternate reality games). More to the point, for a guy who spends so much time sitting around thinking, Marcus doesn’t have much of an inner life. He doesn’t think about girls much until one asks him out; he doesn’t worry that he’s not attractive enough, or get horny all the time. He says once, when he’s about to lose his virginity, that he wondered hundreds of times what his first time was going to be like, yet he never so much as mentioned it before that. (And, as I remember, virginity is something keenly on the minds of teenage boys.) He also doesn’t worry about what he’s going to do after he gets out of school, what college he might go to, what career he might have. He doesn’t worry about whether his friends really like him, or what the people at school think of him. He gets along well with his kind and basically well-adjusted parents except when it makes sense for the plot or when Doctorow needs another straw man to knock down. Indeed, almost everything Marcus thinks about relates directly to the plot, and when Doctorow does throw in a little emotional complexity, it comes off forced. Consider this passage from when Marcus is being held by the DHS:

It’s funny, but when she was talking about my getting “privileges” it scared me into submission. I felt like I’d done something to end up where I was, like maybe it was partially my fault, like I could do something to change it.

But as soon as she switched to this BS about “safety” and “security,” my spine came back.

As I walked back to my cell, that feeling of deserving it came back to me. I’d broken a lot of rules all my life and I’d gotten away with it, by and large. Maybe this was justice. Maybe this was my past coming back to me. After all, I had been where I was because I’d snuck out of school.

I got my shower. I got to walk around the yard.

It’s like someone told Doctorow that innocent people under interrogation often feel like they deserve it, and so he payed lip service to the idea in a few sentences. I don’t believe Marcus really thinks he deserves it when all I get is “maybe it was partially my fault” and “that feeling of deserving it came back to me”. There should be guilt about events in Marcus’ life that this interrogation is dragging out of him. He should be running through everything he may or may not have done wrong which make him feel like he deserves it.

This is really a problem because we need to believe in these characters in order to feel outraged by what’s happening to them. George Orwell’s 1984, an obvious and acknowledged influence here, is effective precisely because Winston Smith seems real to us, because we identify and sympathize with him. Marcus Yallow, on the other hand, always feels like a bit of a cardboard cut-out moving through the motions of a human, a plot construct with some feelings tacked on for the sake of drama.

Doctorow likes to relate an anecdote where, some time ago, author James Patrick Kelly criticized his stories by telling him he was an “asshole whose work was merely pyrotechnics without any depth.” “He told me,” says Doctorow, “that I needed to sit down at a keyboard and open a vein.” He talks about this as a major turning point in his work. But looking at his recent output, especially his best book, the beautiful Someone Comes to Town, Someone Leaves Town, his problems with characterization are getting worse and not better. Doctorow should go back and look at Kelly’s advice again and figure out how to dig down into himself to create emotional verisimilitude. Because it would be easy for him, like too many other writers, to believe he has achieved a certain level of popularity and acclaim, been nominated for the right awards, and figure he’s doing something right and keep on going the same way. And if that’s the case he will never be more than an okay writer with occasional moments of brilliance. For now, Little Brother is a fun, useful book, even if it isn’t a great one.