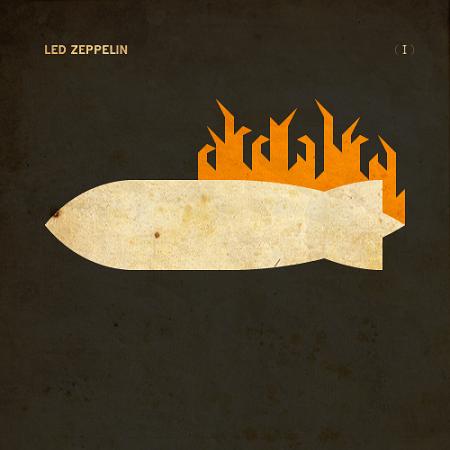 1. I love it that the “Penguin paperback look” has become a design meme. BoingBoing points out that a set of album covers by Ty Lettau of Sound Of Design resembles the retro Penguin look. This calls to mind a more explicit recent implementation of the same idea by LittlePixel (great work, but there are way too many Simple Minds albums here).

2. Some of my friends in the book business think literary publishing is about to crash like a lead zeppelin. There was a tremendous uproar in the book world today: influential literary agent Andrew Wylie (Philip Roth, Orhan Pamuk, Salman Rushdie, the estates of William S. Burroughs, John Cheever, John Updike and Vladimir Nabokov) has made a bold, unprecedented e-books deal with Amazon that will give Amazon and its Kindle format exclusive access to many important e-book titles. Exclusive access has (thankfully) never not part of the literary publishing industry tradition, and the major publishers don’t like being cut out of the profit equation, which is why CEO John Sargent of Macmillan (who is emerging as an unofficial spokesman for the publishing industry when it battles with Amazon) and spokesperson Stuart Applebaum of Random House are planning to put up a fight. Many of my twitter friends seem to be lining up on the Macmillan/Random House side, objecting to Wylie and Amazon’s audacious move. Me? I’ll walk the line a little longer. I like audacity, and God knows the e-book marketplace can use a kick in the ass.

3. This latest uproar was compounded by the fact that Amazon wound everybody in the publishing biz up earlier this week with a slightly vague announcement that, according to their (unreleased) figures, they are now selling more Kindle editions than hardcover books. I’m not too bowled over by this announcement either. First, Amazon doesn’t release it’s sales figures, so these numbers are obviously being spun like a frisbee. Second, as I said on twitter: wake me up when e-books start outselling paperbacks.

4. Nobody in the big business/investment community, meanwhile, really cares about providing e-book readers for poor people, though fortunately some small start-ups are thinking about it.

5. Some never-before-seen Franz Kafka works may finally reach us, and since his best novel The Castle was similarly rescued from his trash heap, we have good reason to be excited. Still, I like Steve Mitchelmore’s take: “Kafka’s work is already a secret. If his novels and stories amount to “a symbol of 20th century totalitarianism” or mean he is “the patron saint of paranoia”, then the lock on Kafka is still to be broken and whatever “letters, journals, sketches and drawings” are disinterred, they will only increase universal misunderstanding.”

6. A cool find, via Frank Wilson: Jacques Brel as Miguel de Cervantes as Don Quixote in Man of La Mancha, circa 1968. Quite a performance, too.

7. Edmund White riffs on Allen Ginsberg’s photography and William S. Burroughs painting (which, White points out, was more profitable for Burroughs than his writing).

8. I love Woody Allen’s early comedy books, Getting Even, Without Feathers and Side Effects. But he sounds seriously unexcited about the audio-book versions he just recorded. Sometimes, maybe it’s not a good idea to get the original author to read his audio books. I also don’t see how Woody’s recognizable voice would help many of the brilliant short pieces in these books, since they are parodies, vamps and rave-ups written in a variety of first-person voices. Woody Allen Fail.

12. The search for the right cover for Steig Larssen’s breakthrough book.