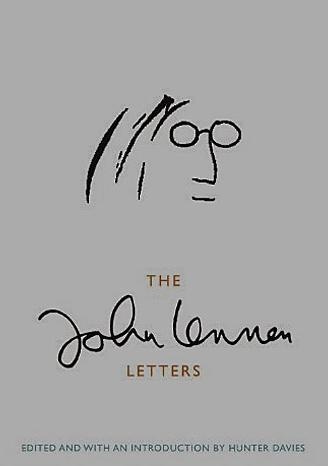 If there is such a thing as a typical volume of letters, The John Lennon Letters

edited by Beatles expert Hunter Davies is certainly not it. John Lennon didn’t write the kinds of letters that Henry James or Vladimir Nabokov did.

Though he wrote many hundreds of songs, John Lennon was not a prolific letter-writer. He tended to keep it short, and his impatient, impulsive epistolatory style, packed with half-puns and gutteral utterances, indicates some proto-form of A.D.D. But Lennon had a strongly visual and artistic mind, and he always took the time to illustrate his chaotic notes and scribblings with cartoons and diagrams. He also wrote in a cheerful, loopy hand, and this is why editor Hunter Davies made a smart decision to create the complete volume of John Lennon’s letters (the first serious volume of collected letters, as far as I know, of any rock musician) as a facsimile collection, with high-quality photographic reproductions printed on thick, good paper.

The texts are transcribed in plain type next to the photographs, but its the visual experience of these letters that packs a punch. Among the cool, surprising or poignant findings in this volume, which spans the Liverpool singer-songwriter’s entire 40-year life:

• Lennon maintained close ties to many aunts and cousins, responded haphazardly to fan requests, became prickly whenever somebody ventured an opinion regarding the Beatles, and rarely discussed politics or religion or other complex issues in his letters. He could not resist answering any questionnaire that was thrust at him or mailed to him, usually with witty semi-nonsensical answers. Through his life, the best way to communicate with John Lennon was apparently to hand him a questionnaire.

• When it comes to beefing, 50 Cent and Ja Rule had nothing on John Lennon and Paul McCartney, circa 1971. A ferocious letter to Paul and Linda McCartney is both the longest and the most entertaining letter in the book. Fortunately, the former Beatles made up eventually. Lennon seems to have sometimes tried to appear fierce and angry, but ultimately could not help being humorous and gentle.

• He was an avid reader, and in the last few years of his life was interested in Elizabeth Hardwick, V. S. Naipaul, Thor Heyerdahl and Susanne Steiner Patch.

This is not a critical or highly analytical volume of letters; it’s a celebration of a life. The book drives home just what a delightful, beautiful and thoroughly wise person John Lennon was, and how much he and Yoko Ono meant to each other. As The John Lennon Letters winds down to its final months, we see John and Yoko resting after their new record release in their cozy home overlooking Central Park in New York City. John’s paper scraps fly past: shopping lists, complaints to assistants about too many yogurt raisins around the house, sunny Thanksgiving greetings sent by John and Yoko to all their friends. Two weeks after this last Thanksgiving in 1980, schizophrenic Mark David Chapman killed John Lennon outside his home with a .38 Special revolver he’d brought with him on a plane from Hawaii.