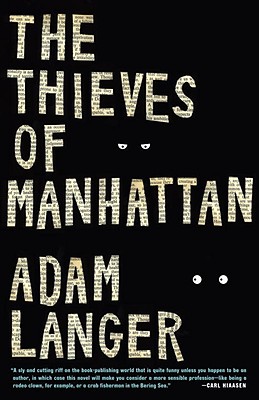 Worst of all was Jens Von Bretzel, a slim, unkempt guy with an army jacket, a luxuriant chabon of black hair, and a “to hell with this crap” demeanor that he barely concealed as he read from ‘The Counter Life’, his debut novel about a barista with a girlfriend who was too good for him, a future that was drifting towards oblivion, and a lousy attitude that kept getting him into trouble. The novel was based on the decade Von Bretzel had spent working at a Starbucks in Williamsburg. Von Bretzel’s work was so much like the stories I was writing that I half suspected he had hacked into my computer and plagiarized my life. Except that Von Bretzel’s work was more confident than mine, as if he considered his life worthy of committing to print, while to me, just about every aspect of my own existence seemed wholly unliterary — how often had agents told me that my protagonists never did anything, that they always waited for things to happen to them?

Almost every character in Adam Langer’s very funny, very expert satire The Thieves of Manhattan is either a frustrated writer or a successful one. The book’s likable hero writes sensitive short stories that nobody cares to publish. He’s bursting with jealousy over the success of a ridiculously popular memoirist who resembles James Frey, and he’s so accustomed to defeat that he’s barely surprised when his own girlfriend hits it big with a debut novel and leaves him for the memoirist. But literary striving is a complete, inescapable way of life to this character; even his vocabulary is riddled with references to the pantheon of popular and classic authors he yearns to join. A “chabon” (as in the quote above) is a wavy haircut, a “gogol” is an overcoat, and “franzens” and “eckleburgs” describe two different varieties of eyeglasses.

But there are layers and layers of knowing satire here: the barista’s title The Counter Life plays on Philip Roth, as does a character named Jed Roth.

“Roth?” Norbert asked. A distant memory seemed to flicker behind his eyes.

Another memory seemed to ripple across Norbert’s face followed by another look of disgust. “He wrote filth too.”

Which Roth was he thinking of? Henry? Philip? “No,” I said, trying to sound as polite as possible, “not that one either. Jed Roth.”

The hero’s own name, Ian Minot, refers snidely to yet another clubby novelist, and the only reason the book doesn’t mention Paul Auster among its Chabons and Palahniuks and Franzens is that the entire story resembles a wacky City of Glass (with its Columbia University locations, tall tales about stolen texts and red notebooks). The entire delightful mess adds up to a fake memoir romp, when the aforementioned Jed Roth approaches the discouraged Ian Minot with a plan to fabricate a fake memoir and cash in on the phony craze.

The fake memoir romp is skillfully plotted, and Langer’s book is brilliantly topped off with (real) blurbs by two great literary hoaxers, Laura Albert aka JT Leroy (who, I think, has finally been forgiven) and Clifford Irving. The novel is as good as these blurbs say, and I’m so impressed with the author that I think I’ll dig into his past work, none of which I’ve read. If there’s any justice in this crazy literary world, The Thieves of Manhattan will be Adam Langer’s breakthrough. It has a lot of New York City/publishing-biz insider appeal — if the fact that Francine Prose turns up in repeated scenes makes you laugh, you are definitely in the target audience — but it’s funny and breezy enough to please any reader with a literary bent.

It’s good news, I think, that so many of the books I’ve enjoyed telling you about in the past year have been comedies. Sam Savage’s The Cry of the Sloth, Katharine Weber’s True Confections, Marcy Dermansky’s Bad Marie and now Langer’s Thieves. The comic novel lives!