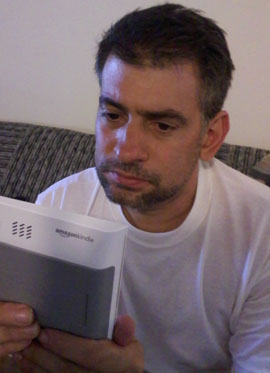 Yeah, I got my hands on a real-life Amazon Kindle e-book reader for a few minutes. Did I “feel the power”? Hell no. The physical packaging reminds me of the Coleco Adam. I tried to read a story by P. G. Wodehouse and I felt like I was playing Pong.

The physical button interface is clumsy, but my main gripe with the Kindle has to do with market strategy: I believe Amazon should sell electronic books that play on a wide variety of popular devices, not a single overpriced dedicated device. When I first wrote on LitKicks that e-books won’t succeed until we can read them on iPhones and Blackberries, several of you disagreed, but I think the success of a new iPhone reader called the Stanza is proving me right.

This leaves me, though, with a problem. I was originally going to get an iPhone but I didn’t want to switch carriers or set my alarm clock to wait in line at the Apple Store, so I never got an iPhone. Instead, I’m rocking a Verizon LG Dare which is basically an iPhone wannabe, and I like the phone fine except it won’t run Stanza. I hope the folks at Lexcycle are working on a few non-iPhone ports please …

2. Check out Tina Brown’s The Daily Beast, which features worthy contributors like Maud Newton and Rachel Maddow. At first glance the Beast appears to want to be an East coast version of Huffington Post, and since I like the Huff, I think that’s just fine. The site will need to shake out a few tech things — can we have author names in the RSS feed, please? — but it appears to be off to a great start.

3. Andrew Gallix at the Guardian asks: whatever happened to the creative potential of digital literature? Good question. I have a bit to say about this, but it will wait for a post of its own.

4. While we’re talking tech, I haven’t had a chance to check Google’s Book API out but I have a feeling this idea has long term potential.

7. A linguistic study of Blog Speak (via Sully)

8. Tina Fey is writing a book! Will she reach the heights of other truly literary comedian-humorists like Groucho Marx, Robert Benchley, Woody Allen and Steve Martin? Well, she hasn’t let us down yet.

9. Heaven-Sent Leaf is a new book of poetry by Katy Lederer, author of Poker Face. Poker and poetry have been a good combination since, at least, A. Alvarez.

10. A YouTube recording of a true castrato. Quite disturbing to listen to. Click through and you’ll see what I mean.

11. I didn’t get much of a response, folks, to my probing questions about Henry David Thoreau and the economy. Let’s yak it up in the outfield, people! Really. I didn’t think you were the types to get scared away by classic literature so easily (I know you can yak it up plenty when the topic is, say, Sarah Palin). So, the next round in our “Big Thinking” series will be about our public political dialogue, and our special guest writer will be Ludwig Wittgenstein. Tune in tomorrow evening when the fun begins.