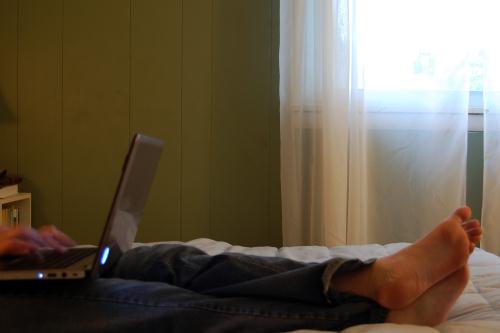 (It’s been a long time since we’ve heard from Jamelah Earle on this blog. Here’s what she’s been up to. — Levi)

A couple of weeks ago, I flew across the country to hang out with an old friend (one I actually met on Litkicks about a decade ago), and on my return journey, I stopped at a kiosk in the airport (Seattle-Tacoma: you know you’re in Seattle when you walk past four Starbucks on your way to your gate) and picked up a book: Medium Raw, by Anthony Bourdain. I started the book on the miserable final leg of my trip home, the flight from St. Louis to Detroit, while sat next to a guy who kept staring at me. He may have had BO, or it may have been the onion rings from the airport Burger King; it’s amazing how similar those two smells are, which is something I never noticed before being trapped near a bag of them in the compressed-air, confined tube of an airplane. Be that as it may, I like Bourdain, and I like his book. The editing leaves something to be desired (Gnarls Barclay? Really?), but even though I don’t always agree with him, Bourdain is blunt and funny and he swears a lot, which is always aces in my book.

I’m not going to review the book (I haven’t actually finished it yet; since getting home, I’ve only managed to get in a few pages at a time while on my lunch breaks – it’s been busy here), but there’s something in it that caught my eye, and I’ve thought about it off and on since I saw it. At the end of the book, there’s a Q & A with Bourdain, and he said something interesting about writers and writing:

I have a friend I talk to about writing, the only friend I talk to about writing, because he’s a writer and therefore gets it. Talking about writing can be a dangerous game: talk enough and you don’t have time to write, and you become all talk, but at the same time, sometimes you need to mention to somebody what you’re up to, need to get it out, away from yourself. You can get too far inside your own head and get lost there if you’re not careful. That’s what happened to me.

A couple of years ago, I was unemployed. I’d lost my job right before the economy went tits up in 2008, and then spent the next year (and then some) unable to find work. Most of the time, I couldn’t even land an interview. Well, actually, most of the time, I couldn’t even get a response to my resume, which always made me feel awesome. When I was nearing the end of my sabbatical from gainful employment, I had a thought: “I could’ve written a novel by now,” I said to my friend with whom I sometimes talk about writing. And then I decided I would start writing one. I had an idea, sort of, and I jumped in, joyful and clueless and dedicated to the task at hand. I wrote and wrote and wrote, disparate pieces of a novel that I was sure I would figure out how to stick together later. I didn’t know how the book would end, and I wasn’t entirely certain of everything that was going to happen in the middle, either. I didn’t know much, as it happens, but I knew one tiny thing, and I figured that small detail was enough to carry me through a novel-length manuscript.

I wrote the beginning, and then I had a thought about it, and wrote it again. Then again. I wound up with seven different beginnings, a small portion of some stuff that might have, at some point, comprised part of the middle of the book, and what could possibly have been an epilogue. I don’t really know. This took months. I changed styles, I changed perspectives, I changed protagonists. It got frustrating and difficult and unwieldy. I had written tens of thousands of words and I still had exactly nothing.

I mean, there was some good writing in there. Some of it is even astoundingly lovely, so much so that when I read it, I have a hard time believing that I’m responsible for it. But I had to think so hard about everything, and could sometimes spend a half an hour on a sentence, getting all the words just right. At some point in this process, I realized I needed a break. I would step back for a little while, maybe get some perspective, and then I would jump back in and everything would be fine. But I was busy, and I had a job and a boyfriend and I had stuff to do that was important, like sitting outside in the sun with a beer, reading a book someone else had written. So obviously, I didn’t have a whole lot of time to work on wrangling that beastly manuscript into something worthwhile. And the more I distanced myself from the work of writing, the more the mere thought of sitting down in front of my computer and pounding out sentences started seeming as appealing as having dental work done.

And then 2011 happened. The first quarter of this year was a special kind of awful, so bad that sometime around mid-February, it just started getting funny. The relationship I’d been in for most of the previous year had completely disintegrated so I was horrifically sad, my job went completely insane, and everyone I knew seemed to be miserable for one reason or another; it was like some widespread plague of suck. And to top it off, it was winter in Michigan, so it was dark and cold and it snowed all the damn time. I missed my best friend’s surprise birthday party – held a few days before she was to have major surgery to remove cancer from her body (the surgery was successful, thank goodness) – because I was sitting in my car alone in a parking lot, crying and watching it snow as the sky turned dark, hating myself for not being able to get it together enough to be around other people. I couldn’t stop thinking about how six weeks earlier, I’d been happier than I’d been in, I don’t know, years, but it doesn’t take long for things to go completely to hell once they start sliding toward the flames. To put it mildly, I wasn’t in a good place in life.

I didn’t know what to do with myself anymore, so I started writing again, because that kept me busy. It filled the hours when I wasn’t at work, and kept me from other things I might’ve done then, like slitting my wrists or eating my weight in chocolate. I didn’t really write anything worthwhile, and I certainly didn’t pick my novel back up and set to work on it. I wrote nothings, little flashes of ideas that got me back into the habit of putting words into sentences into paragraphs into pages. It was exercise, and I needed to get back into shape. I didn’t even save much of it; I’d just write and let it go.

It’s been nearly a year since I wrote anything on my novel manuscript, and I’m now comfortable calling that experiment in sustained storytelling an utter failure. I think there’s some good in it in places, but I also know that sifting through all the garbage strewn across various documents in order to find what’s worth saving probably isn’t worth the trouble. Someday, when I am emotionally able to say goodbye to one more thing I put myself into (there was a time, before it fell apart, before it became some form of verbal wankery, when my heart was in it), I’ll let go of it, too. I still have the idea, and maybe in the future, I’ll be able to make that idea into something worthwhile. I hope so; it really is a good idea, if, at present, it’s nothing more than that.

To get back to the genesis of this post, I think Anthony Bourdain has a point, even if I don’t entirely agree with it. I think it’s okay to talk about writing, as long as that’s not all you’re doing. (My friend, the one with whom I discuss writing sometimes, says he can’t call himself a writer if he hasn’t sold anything in six months; I’m a little less strict and say you can’t call yourself a writer if you’re not writing anything.) But writers can be an insufferable lot, because talking about writing can be just awful, and the line between discussing something in a useful way and being an utter dick is incredibly narrow. (This is why I never took writing classes – I used to listen to conversations among people who were in writing classes.)

I’m willing to take advice from Anthony Bourdain; he’s written way more books than I ever have. The most important thing about writing is to do it. Do the work. Because writing is work. It can be fun work, but it still takes the time to sit there and write. Not thinking about writing, or talking about writing, actually writing. The thing I’ve learned from my failure as a novelist is that it’s not all romantic and driven by a muse; I suppose it would be lovely to be inspired all the time, but when it comes down to it, I have learned that I’d rather have the discipline to stay focused on the work and to get something done.

I don’t know if I’m any better at writing than I used to be, but I hope that I’m at least smarter about it. This is why I won’t tell you what I’m up to these days, but, as ever, it’s definitely something. Life is on the upswing, and I no longer sit alone in my car and cry over that charming blue-eyed man. I’ve been working on something for about a month, and entertaining the hell out of myself in the process.