Junk Books and Junk Bonds (or, Sometimes the Book Game Reminds Me of the Bank Game) 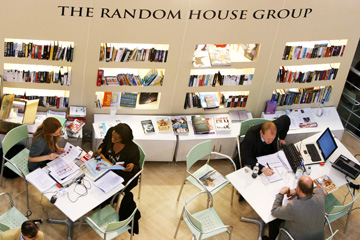 What do corporate book publishers like Random House, Simon and Schuster and Farrar Straus and Giroux have in common with financial powerhouses like Lehman Brothers, Merrill Lynch and AIG? If you guessed that they are all doomed, you’re wrong.

Here’s the right answer: the book industry, like the financial industry, should be in much better shape than it is. Wall Street is suffering from the consequences of short-sighted management and greedy, over-optimistic expectations, despite the fact that the borrowers these banks finance remain generally productive and profitable. Likewise, many publishing industry complainers claim that nobody reads books anymore (Daniel Mendelsohn) or that the publishing industry is collapsing (Boris Kachka) even though books remain incredibly popular at all levels of American life.

Little known fact: book publishing is a $30 to $35 billion/year business. Consumers spend roughly the same amount of money each year on books that they spend on films or music. Here’s another surprising (but easily verifiable) fact: companies like Random House, Simon and Schuster and Penguin are profitable, year after year. Yes, profitable. Doesn’t sound like death throes to me.

The reason industry observers claim that book publishing is dying is that they interview industry executives whose own careers are dying. The business is highly irrational and unpredictable, and many high-powered execs are unable to remain atop the bucking rodeo bull. But what these execs are suffering from is an industry that changes too fast, that relies too heavily on high advances and other risks, that doesn’t know how to price and market its properties in the new electronic marketplace. In other words, the book publishing industry is not too stagnant — it’s too dynamic.

Let’s look more closely at the similarities between finance and book publishing. A great backlist title like Catcher in the Rye or The Alchemist or every Harry Potter book is like a blue-chip stock. They are dependable sources of revenue, and you can never go wrong with a blue-chip book or a blue-chip stock. Success comes to those who locate and develop those properties before they are identified as blue-chips. This is the foundation of smart investment banking, and it’s also the foundation of smart book publishing.

The term “junk bond” sounds demeaning, though this should not necessarily be the case. A junk bond is an admittedly less proven loan asset that some investor deems worthy of taking a risk on. A first novel by an unknown author or an unusual title by an experimental author is like a junk bond. If it takes off, that’s a big surprise and a big win. If it doesn’t, the price wasn’t very high to begin with, so the investor (or publisher) can handle the loss.

The problem comes when good fortune inspires investors or publishers to start confusing their junk with their blue-chips. And the real problem comes when this investor or publisher manages to convince others to confuse their junk properties with blue-chips, and to join in on the investment. Often this is a matter of packaging or marketing. Most recently, mortgage bankers found ways to package high-risk home mortgages into bundles that seemed, on the aggregate level, less risky than they actually were. The widespread investment in these questionable assets led directly to our current financial crisis.

Similarly, big hits like Da Vinci Code and Cold Mountain inspire book executives to take great risks on possible future successes. Given the reflective and hype-hungry nature of book publishing, these risky investments generate a lot of attention but then crash and burn more often than they succeed. Sales and marketing efforts create big expectations, but junk is junk, and you can’t fool readers into buying a book they instinctively dislike. These highly visible failures are what lead to the mistaken impression that consumers must not be buying books, when in fact consumers are buying books. The publishing industry is simply tripping over itself trying to monetize their readers’ interests. They can’t stop overrating (and overpaying for) their junk.

The bumpy ride will continue, because book publishing has never been anything but an exciting and high-risk industry. It’s aggravating, though, to hear commentators like Daniel Mendelsohn claim that new media has harmed book sales, or that internet publishing has anything to do with industry problems. I can’t repeat this fact enough: we spend over $30 billion a year on books. That’s plenty enough revenue to allow any industry to prosper.

Book publishers have nobody but themselves to blame for their gullible investments in questionable properties. Here’s the problem: the world needs investment firms and the world needs books. The US government can bail out Freddie Mac and AIG, but who is going to bail out Bertelsmann and Holtzbrinck and Hachette?