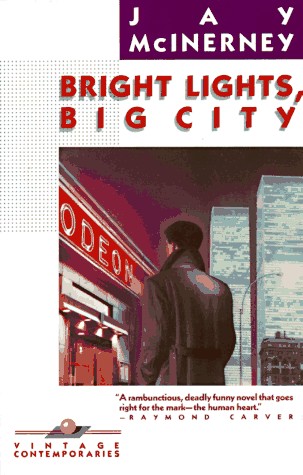 Jay McInerney was born in Hartford, Connecticut in 1955. He graduated from Williams College, a prestigious liberal-arts school in Massachusetts, and allegedly used his social conventions there to get a job at New Yorker Magazine, after which he slam-dunked a book contract and a ton of publicity for his first novel. But we don’t hold this against him, because “Bright Lights, Big City” was actually a hell of a lot of fun to read.

It’s considered by some to be the classic 80s novel, illuminating the moral crisis of a tormented Manhattan yuppie as he snorts cocaine, dances to disco music, falls in love, fucks up his magazine job, and finally finds redemption in a fresh-baked loaf of bread. Fortunately McInerney keeps the story moving fast, and comes up with a hell of an original device in the second-person narration. Most novels are either first person (“I ate a cherry”) or third person (“She reached into his pocket and removed a large painting by Kandinsky”), but McInerney wrote the entire “Bright Lights, Big City” – the entire thing – in second person (“You order the salmon ravioli. You decide it needs bay leaves.”).

He was one of the hottest young things in the 80s lit scene (along with Tama Janowitz and Bret Easton Ellis), but McInerney’s follow-up novels, like those of his peers, were disappointing. “Ransom” came first, a poignant Japan-themed coming of age thing, and “Story of My Life”, a poignant portrait of a confused club girl came next. Neither were written in snappy second person, and neither really got read very widely. McInerney’s reputation was also not helped by the wet fizzle of the movie version of “Bright Lights Big City”, starring Michael J. Fox. Perhaps this brought out what many of us McInerney fans already suspected and feared, which was that there were a lot of similarities between the main character of “Bright Lights, Big City” and Alex P. Keaton.

The movie was a flop, the new novels went nowhere, and the coke high of McInerney’s career was basically over. He is now writing a column on wine for House & Garden, or something like that. But he does not deserve to be forgotten, even if he may never write a second classic.

A friend of mine who actually read one of McInerney’s entire late comeback novels (I think it was “Brightness Falls”, a poignant story of a yuppie marriage) tells me that McInerney is the 80s version of F. Scott Fitzgerald. Like McInerney, Fitzgerald was a hip young star whose first novel (“This Side of Paradise”) was a big smash, and despite the fact that “The Great Gatsby” was among his last novels, Fitzgerald’s popularity took a dive and he was widely considered a washed-out party-boy until he died and “Gatsby” was discovered by the critics.

I think it’s premature to compare McInerney to Fitzgerald. Perhaps “Story of My Life” or “The Last of the Savages” are Gatsby-like unknown masterpieces. But we don’t know if they are or not. Because we haven’t read any of these novels, and, just admit it, neither have you.

There is an official Jay McInerney web site which includes a heartfelt, emotional article about his experience of watching the World Trade Center collapse on September 11 – and recalls the fact that the towers had been featured on the cover of the first edition of “Bright Lights”.