The Seagull Is Back

The Seagull is back. And I’m not talking about Anton Chekhov.

A friend of mine literally screamed — a spontaneous burst of horror — when she spotted the new edition of Jonathan Livingston Seagull, a once-popular book from the 1970’s, on a bookstore shelf. Richard Bach’s slightly corny fable about a bird who wants to fly faster and better was the “Da Vinci Code” of its age, and people usually either like it or violently hate it. I read it when I was a kid and thought it was pretty good. Whether it deserves a comeback or not, I’m really not sure. 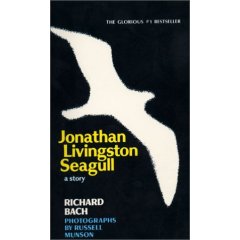 This book was a classic of the late hippie age, the early 70’s, and as a kid I remember it showing up on the same bookshelves that would house Zen and the Art of Motorcycle Maintenance and I’m O.K. You’re O.K. I sat down and read the whole book at one point — you could read it in a single sitting — but it didn’t make a gigantic impression on me. I liked the positive message, but it all felt a little humorless and simplistic. But then, what did I expect? It’s a book about a seagull who thinks in English.

I always felt the triumph of Jonathan Livingston Seagull was partly the triumph of great book design. The cover is as much a work of pop art as anything Andy Warhol ever did, transforming a seagull’s body and spread wings into a cool, perfect white curve. The arrangement also neatly echoes the book’s basic theme: the pursuit of white-light perfection. The deep blue background is bold yet calming, the typography modest and modern. I sometimes think the book designer Chip Kidd is overrated; he still hasn’t done a cover as good as Jonathan Livingston Seagull. And I’m happy to report that the new paperback edition leaves the design mostly intact, though the book is slightly wider and larger.

The aesthetic didn’t survive the transition to film, though. The film was supposed to have been really bad, and I have never met anybody who’s seen it. I don’t even know if Neil Diamond ever saw it, and he did the music. If you’ve seen it, please tell us everything you remember. 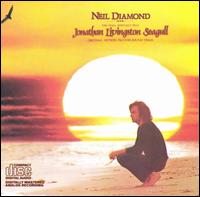 Richard Bach’s follow-up novel Illusions: The Adventures of a Reluctant Messiah also suffered from a mediocre cover design, with a feather motif that unfortunately foretold the coming horrors of “Forrest Gump”.

Richard Bach is still writing, and commands a loyal audience to this day.