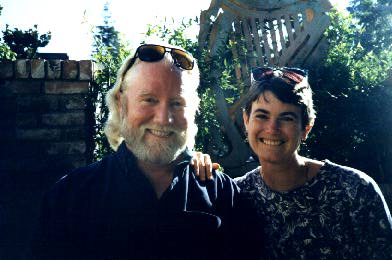 I’d been at Caere for about four months when I went out for drinks with the after-work party crowd at the Black Watch, a dirty, sleazy, scummy little bar which is for some reason wildly popular with the local yuppies and college crowd. People were astonished to see me as apparently my department doesn’t get out much.

After about an hour in this packed crowd all chowing down beers and kamikazes and burritos, a guy with longish blond hair and a beard walked in. The whole crowd looked up and yelled, “John!” just like Cheers. He immediately got a bunch of drink offers. The only empty chair was next to me so he sat down, stuck out his hand, and said, “Hi. I’m John.” “I know,” I said, meaning I had just heard about 20 people shout his name. “I’m Pat.”

Now we must cut to John’s perspective. He said later he’d seen me around the halls and liked me, knew my name, wanted to get to know me better. When he came in he saw me and thought, “There’s that woman! And there’s a chair by her!” So when I said I knew who he was, naturally he thought, “Ah, she’s up on the Cassady thing.”

So he proceeded, after a few work questions, to launch into the story of his life: where he’d lived, how he moved into various great houses, how he got his job, the people he knew, all about his dad. I thought he was one of the friendliest guys I’d ever met. He told me a story about coming out in the kitchen when he was 12 and seeing his dad rolling up acid in his sleeves. “Your FATHER?” I said. “Oh yeah,” he replied as if this were a normal everyday activity, which perhaps it was. “You sure had an interesting father,” I said. “Yeah,” he said with a shrug, as if he heard this a lot. This kind of puzzled me.

After more stories of his dad and life, he suddenly asked, “Do you know who Neal Cassady was?” (Later, he said I seemed a little lost in the conversation and just wanted to make sure we were on the same track.) “Sure,” I said, surprised anyone could think I was so rampantly uncool as to NOT know, “he drove the bus!” John nodded and continued on with his tales. He was too polite to mention that period of time was one of his family’s least favorite to recall about Neal.

Now, by this time I knew John’s last name but did not make the connection because I thought the family name was spelled Cassidy, with an “I.” I had assumed the Dead song of the same name was about the man–which it is, in many ways (read the Barlow posting). I had even seen John’s name plate on his cube and hummed a few bars as I passed by.

Finally, wrapping up, John said, “Yeah, it’s nice–I still get calls and letters from all over the world from fans of my father.”

John looked at me in utter astonishment. “Neal Cassady!” he said. “I thought you knew!”

“No, I didn’t know.” I think I had a classic pop-eyed, slack-jawed expression. MAN, was I embarrassed.

“No, I’m embarrassed,” I said and so we were both mutually embarrassed and jabbering at each other. This was quite amusing when we looked back at it months later. John got up to get a drink and I immediately moved to another seat, too mortified to speak to him and pretty stunned to think that I’d been merrily talking away to Neal Cassady’s son about my own minor exploits. (Later that night John, in his kind way, thanked me for telling him such interesting stories.)

John had let me bum cigarettes from him during this time, and several people had bought me drinks cuz I’d come along with no money and no cigarettes, the perfect party guest. John was gone awhile, so I began offering his cigarettes to anyone who wanted one (“They’re John’s! Want one?”), with the result, I think, that we actually smoked them all. It was a pretty snockered crew of people. An ice cube fight broke out then so I said goodbye, staggered home, and told everyone I knew that I’d met Neal Cassady’s son and that we worked in the same place. This impressed Beat/60’s fans no end, especially my brother (who constantly reminds me, “I’m the one who first told you about Neal Cassady”).

I woke up mortified and hungover the next day, thinking about what a jerk John must think I was and how I’d bummed all his cigarettes to boot. As it happened, he worked two cubes away (I never really knew this) and often came to the cube on the other side of the wall from me to talk to his coworker. I saw his neon blond head over the wall and he said, “Hey, Pat. That was fun last night.” I agreed it was, apologized for bumming all his cigs (“No problem,” he said) and for being dense and we talked over each other along these lines: Cassady assumptions, cigarettes, fun time, do it again sometime, etc.

A couple of days after making a fool of myself in the bar with John, I saw him in the company breakroom. “Hey John,” I said. “I figured out why I didn’t know who you were. See, your name is spelled with an “a” and I knew the song “Cassidy” was about your father so I thought that was how you spelled your name.”

“Oh, yeah, I was talking to Weir once about that,” said John, SO casually. “He said the song was actually written about a little girl named Cassidy.”

Wow, I thought. If he meant to impress me by name-dropping, he did. (I’m easily impressed. I once snagged a guitar pick from the stage of NRBQ and was thrilled. I got two feet away from Jerry Garcia’s sneakers above me on the stage at a Dead show and can still remember the toes of his shoes.) I asked John if he was going to the company picnic–there was a sign-up list in the room–and he signed up right away. “Man, in the old days, everyone would just get HAMMERED at these lunch picnics and then come back to work,” he said, laughing. “It was great.”

I thought this was pretty funny cuz everyone seemed rather staid at work. I did see John at the picnic and wanted to say hi, but he was off blabbing with bunches of people, many of whom were getting hammered. I was still rather in awe of the legend behind John at this point and didn’t approach him though he came up to me later and complimented me on my frisbee playing.

Now I’m cutting out a lot of long blather and details that I told Levi. I didn’t really want to print this story, telling him: “I’m not sure just how fascinating this would be to Beat fans who most likely wouldn’t give a flying **** about JC’s little girlfriend… ” And Levi replied, “Maybe everybody won’t care about “JC’s little girlfriend” — but people who come in to LitKicks are already used to my own rambling style, and if they don’t mind me blabbing about my kids and my job and my favorite novels in a site that’s supposed to be about Kerouac and Ginsberg, I’m sure they’d cut you some slack too.”

I’m banking on this assurance..

Here’s a side note about the picnic where I played frisbee: After John and I had been dating for a couple weeks at the end of the summer (about six months later), he went to a company function with his department on a Friday night. At the time, his coworker Pam was still with the company and they hung out a lot together that evening, talking. John kept calling her “Pat.” Now Pam, who is very volatile and blunt, hates being called anything but Pam. Finally she screamed at him, “My name is PAM John! Stop calling me PAT!” John apologized and said, “I’m sorry Pat–Pam, I don’t know why I keep calling you that.”

Pam rolled her eyes and said, “Oh, JOHN. EVERYONE knows you’re in love with Pat Gallagher. I saw you watching her at the PICNIC!” He was totally taken aback by this. He didn’t think anyone knew we were dating and here Pam was talking about an incident that had happened six months before, when we had barely talked twice. I thought it was hysterical.

John and I rehash this and other meetings that led to the great romantic moment when we actually started dating; we go over each detail until it’s secured in our minds, and then work it through again. Irish blood and a love of storytelling, I guess. I wish I remembered all the stories he told me in the bar that first night, but we all were pretty plowed and I’ve heard plenty of good ones since from both him and his family. They talk about Jack and Neal and Allen as if they’re just old Uncle Bob and Aunt Martha, the interesting ones in the family, instead of these amazing legends that knock Beat fans silly with even a mention of their names.

Ah, but I rave on. John’s got plenty to say, so go read him now. Enjoy.

This is part three of the four-part John Cassady Interview.