Five Hiphop Masterpieces From The Past Decade #3: Graduation 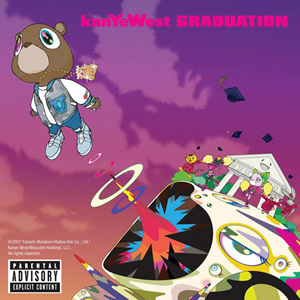 Many music critics placed Kanye West’s first album College Dropout near the top of their best-of-the-decade lists. That was an excellent record, featuring his lyrical breakthrough “Through The Wire”, but for the LitKicks Best Five of the 2000s I’m going with Ye’s third album Graduation, the conclusion of his college trilogy.

Graduation is more consistently listenable than his previous records, partly because it avoids the dumb jokey skits about college education that mar the first two, and also because two hit songs from Dropout and Late Registration (“Jesus Walks” and “Golddigger”) were overplayed beyond the point of repair. There’s no one big hit on Graduation, but it’s packed with strong tracks like the visionary “Everything I Am”, a song so good it must be quoted in full.

I’ll never be picture-perfect Beyonce
Light as Al B or black as Chauncey
Remember him from Blackstreet?
He was as black as the street was
I’ll never be laid back as his beat was
I never could see why people’ll reach a
fake-ass facade they couldn’t keep up
You see how I creeped up? You see how I played
a big role in Chicago like Queen Latifah?
I’ll never rock a mink coat in the winter time like Killa Cam
Or rock some mink boots in the summertime like Will.I.am
Let me know if you feel it man
’cause everything I’m not made me everything I am

And I’m back to tear it up
Haters, start your engines, I hear ’em gearing up
People talk so much shit about me in barbershops
they forget to get their haircut
Okay fair enough, the streets is flaring up
’cause they want gun talk or I don’t wear enough
baggy clothes, Reebok’s, or Adi-dos
can I add that he do spaz out at his shows?
So say goodbye to the NAACP award
Goodbye to the India-dot-Arie award
They’d rather give me the N-Nigga Please award
But I’ll just take the I Got a Lot of Cheese award

I know that people wouldn’t usually rap this
But I got the facts to back this
Just last year Chicago had over 600 caskets
Man, killing’s some wack shit
Oh, I forgot, except for when niggas is rapping
Do you know what it feel like when people is passing?
He got changed over his chains, a block off Ashland
I need to talk to somebody, Pastor
The church want tithe, so I can’t afford to pay
the slip on the door, cause I can’t afford to stay
My 15 seconds up, but I got more to say
“That’s enough Mr. West, no more today”

Loudmouth, wise-guy, comedian, activist and street philosopher, this gifted young MC specializes in “did he just say that?”. If it’s Kanye we’re talking about, yeah, he probably did just say that. Unabashedly intellectual, political and pop-culture obsessed, he seems to have made it his core principle to never censor himself, neither on grounds of offensiveness nor of triviality. This can get him into trouble, as when he grabbed a mic from Taylor Swift last year at a televised awards show and declared that Beyonce should have won instead. Picking on a teenage girl didn’t turn out to be a smart career move for Kanye, but the syndrome he exhibited was nothing new. He criticized himself for it on Graduation long before the Taylor Swift incident occurred:

I feel the pressure, under more scrutiny
And what I do? Act more stupidly

I saw Kanye in concert after Graduation came out, before the Taylor Swift fracas. It was an unintentionally disturbing show. The concert was staged as a massive ego trip, a highly synchronized multimedia career showcase that also felt like a ghostly self-portrait of a lost soul. Kanye was alone on a large sculpted stage for over an hour; his isolation and confusion as to where to go next with his stellar career were absolutely clear. His beloved mother’s death during a plastic surgery procedure clearly haunted him, and his fourth album 808s and Heartbreak would eventually reveal that major love problems were beguiling him during this period as well.

The hiphop genius who owned the 2000s had begun the decade as an eager unknown sound engineer from Chicago, then invented an improbable rap career for himself that took even his closest collaborators by surprise. By the end of the decade he reached the far limits of celebrity success, and he’s currently taking a break from public appearances (he didn’t even show up at last week’s Grammy Awards, to the relief of many), hopefully to calculate the comeback phase of his career.

Graduation was the culmination of his bright first phase: Kanye at the top of the world, simply bragging, “you can’t tell me nothing!”. Another track on the album toasts “The Good Life”, and another one declares (with Nietzsche) that whatever doesn’t kill him makes him stronger. Nothing’s killed him yet, so we have a lot to look forward to.

Five Hiphop Masterpieces from the 2000s