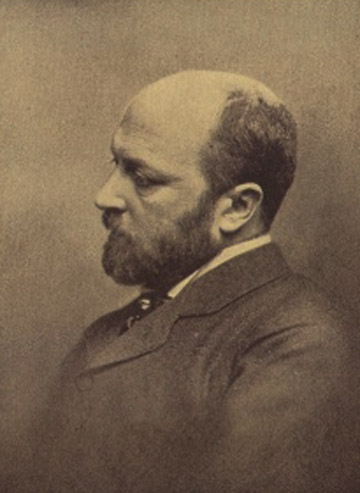 The novelist and short story writer Henry James was born on April 15, 1843 in a house on the north side of Washington Square Park in Greenwich Village, New York City. He was born into an almost incredibly intellectual and lofty family: his father was Henry James Sr., a member of the broad intellectual circle that included Ralph Waldo Emerson and Nathaniel Hawthorne, and his older brother was the great philosopher and early psychologist William James, whose scientific and metaphysical explorations of human experience would become as influential as Henry’s wistful fictional explorations of the same subject.

The James children, including the lively sister Alice, were raised with liberal political views and a fervent scholarly intensity, and were also exposed to the unusual religious teachings of the Swedish mystic Swedenborg. The relationship between William and Henry was respectful but competitive, and from a young age Henry played down his own intellectual promise in deference to the brilliant William, who showed great promise and studied vigorously at Harvard. Henry followed William to Harvard, where he briefly studied law but lost interest, instead traveling to Europe to pursue his growing interest in literature.

He wrote short stories for magazines like the Atlantic Monthly, and his first novel, “Watch and Ward”, was published in 1871. This story about a twelve year old girl who is pursued by an amorous older man is an early example of one of James’ two great themes, the perilous journey of a promising young woman facing the trials of seduction. “Daisy Miller” would present a flirtatious teenager who makes a tragic mistake with an Italian man in Rome; “Portrait of a Lady” would tell of a charismatic, intelligent and self-assured young woman from Albany who agonizes to make the right choice of a suitor and then makes an utterly wrong choice; “Washington Square” would relate the bitter story of a worthy but unattractive woman who tries for the first time in her life to enter the sweepstakes of romance, only to find all her worst fears quickly realized as everybody in her life, from her father to her confidante to her potential lover, betrays her in turn.

Biographer Leon Edel conjectured that many of these female prototypes were based on a young cousin of Henry’s who died, and who he may have felt love for. Because she died and was no longer able to disappoint his romantic fantasies towards her, Edel suggests, James was able to idealize her into a recurring fictional character. Edel’s concecture seems to make sense, and the affectionate relationship of Isabel Archer to her own bookish relative Ralph in “Portrait of a Lady” is especially interesting for this reason.

James’ other main theme was the plight of the American in Europe. As a young American would-be novelist travelling Europe in pursuit of the legacies of great European writers like Balzac, Dickens and Turgenev, Henry must have felt foolish and outclassed, because he depicted this sense of displacement over and over in novels such as “The Americans”, in which a brash new-world businessman becomes entwined in the schemes of a grand but ruined European family, and, again, in “Portrait of a Lady”, in which Isabel represents not only female purity endangered by male sexuality, but also American innocence endangered by European deceit. (This odd metaphor, America as a young girl and Europe as a lecherous older man, would later be employed by Vladimir Nabakov in his Jamesian masterpiece “Lolita”).

James lived the lucky life of a shy, courteous man born with great gifts — a supportive family and a brilliant mind. He enjoyed his growing celebrity as a writer, attended salons with old masters like Turgenev, supported young talents like Edith Wharton, and remained an expatriate in London, Paris and around the world for most of his life.

James was one of the last great “pre-modern” writers, and his style can seem quaint and antique next to the aggressive experimentalism of James Joyce, the surrealism of Franz Kafka and the sexual libertarianism of D. H. Lawrence. However, none of these writers can fully approach the pleasurable richness of Henry James’ prose, which offers sentences of gem-like clarity and astounding descriptive power. James’ psychological focus is also unparalleled. His older brother wrote “The Principles of Psychology”, and these same principles were the subject of Henry’s stories, in which clashing impulses and societies confront each other and reveal astonishing but subtle truths.

James became increasingly a socialite, but never married, and some biographers consider it likely that he died a virgin (which is more than many of his idealized female characters can say).

Like T. S. Eliot after him, James gradually morphed himself into a member of the British aristocracy. Taking a rare political stance in his final years, he spoke out against America’s reluctance to enter the first World War on Britain’s side, and became a British citizen. He died soon after, on February 28, 1916. The tiny emotional battles that he chronicled so carefully — between gullible young women and clever older men, between foolish Americans and dishonest Europeans, between the spiritual ideals and baser impulses of every person on earth — must have seemed irrelevant to the world in the year of his death, as vast armies massacred each other from opposing trenches across continental Europe. James’ literary genius inhabited a world too small for the 20th Century, but as wide and broad as all human experience.