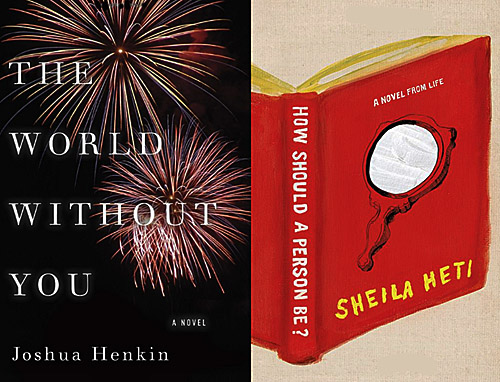 This is a story about blogger’s block, and about two novels I tried to review and couldn’t.

I liked one of the two novels a lot, and didn’t like the other one at all. One had been sent to me by the author, the other by a friendly publicist, and I intended to blog about both of them. But when it came time to write, I found myself strangely stunted. I’m not often at a loss for words, but a weariness with contemporary fiction seemed to have stormed me like a derecho. The ensuing struggle helped lead me to a decision (Rilke: “you must change your life”) that it was time for me to do something new and different with Literary Kicks.

Here’s what happened: first, I read The World Without You

by Joshua Henkin, a smooth professional novelist who runs the MFA program at Brooklyn College in New York City. He’s a master talent who takes his craft very seriously, and he’s got a lot of heart. The World Without You is a family story — love, divorce, conflict, misunderstanding — in the great tradition of Laurie Colwin or John Updike or Anne Tyler or Katharine Weber or Jonathan Franzen or Roxana Robinson. The novel satisfies in the same sublime way that most novels about families satisfy: it wrenches at you, surprises you, aggravates you, and totally makes you relate.

I thoroughly enjoyed reading this book. But I found myself lacking a desire to write about it. Should I describe the characters, the taciturn Dad, the fiery Mom, the brother who died, the angry sisters who remain, the outrageous (and hilarious) former slacker turned Orthodox Jew who marries into the family? I could describe them, but Joshua Henkin already did. Should I explore the meaning of the novel? I couldn’t think of a meaning, except “this is a family”. (Which means plenty, if you say it right.)

Next, I read Sheila Heti’s How Should a Person Be? A Novel from Life

, a very trendy and Zeitgeist-y metafictional thing about a self-conscious writer (named, coincidentally enough, Sheila) and her artsy/literary friends. I thought I might like this book because it’s structured as an inquiry into ethical philosophy. As the title suggests, it’s a novel about a writer trying to figure out the best way to live.

Robert Pirsig’s Zen and the Art of Motorcycle Maintenence was also a novel in the form of an inquiry. But where Pirsig’s novel features internal combustion engines and mountain vistas and stark encounters with professors at the University of Chicago, Heti’s novel reads like a yawning browse through a hip fashion magazine. Sheila poses stylishly at restaurant tables exchanging clever or tarty remarks with painters and other writers, and sometimes she transcribes the clever or tarty remarks from tape recordings. Nobody actually tries to answer the question “how to live”. The people aren’t likable, though I bet they wear great shoes.

I used to enjoy tearing apart a novel I couldn’t stand, but as I tried to write about this novel I felt completely stalled, and suddenly couldn’t find the point of writing anything at all. Sure, I hated this book, but I suppose that some people who love Tao Lin and Dave Eggers may like it, and why should I berate them for their tastes? It all seemed pointless. Had I lost my lit-blogger mojo completely? Apparently I had.

Maybe my self-assigned reviewing task would have been easier if I didn’t try to uphold high standards for originality. I wanted, for instance, to write about The World Without You without saying “Tolstoy”, and I wanted to write about How Should A Person Be? without saying “twee”. In both cases, this challenge proved insurmountable, and I finally gave up.

This ordeal led me to realize that I am getting bored with the current state of my blog, Literary Kicks. I suppose this is understandable, since the site just turned 18 years old. The first version of Literary Kicks was a simple set of hypertext pages about a few of my favorite writers, written while I was pretending to write C++ programs for a Wall Street bank.

I’m not sure what I’m going to change it into, but I have a big urge to break away from any conventions that bind me. A few years ago, back when I was member of the Litblog Co-op, I briefly tried to position myself as a literary critic, because many of the best literary bloggers were establishing themselves as professional critics, and it seemed like a good path to follow. I’ve gradually come to realize that this is not my place in life.

I’ve always been more fascinated by the grand sweep of classic literature than by the contemporary scene, and I don’t have the hunger to discern “the pulse of today” that a good literary critic must have. I often find myself exploring the interplay between literature and history, but current or emerging writers can’t be read in the context of history. This is why I’m generally bad at discovering emerging writers: a new novel often feels to me like a novel in a vacuum. If I have to choose between, say, Chad Harbach’s The Art of Fielding or an unread Joseph Conrad masterpiece bearing the glorious patina of a century’s age — well, sorry, Chad, but I’m going with Joseph Conrad. Look me up in a hundred years, and if they’re still talking about The Art of Fielding, I’ll check it out then.

But I’ve been straining to fit Literary Kicks into some mental picture of what a serious literary blog should do — review new books, discover emerging voices — and I’ve decided to allow myself to reinvent this site without any constraints. I’m going to drop the site on the floor and watch it crash into pieces so I can figure out how to put the pieces back together in a new way. This is what I plan to do during the month of August. By September, a new version of Literary Kicks will be up. I’m also planning on upgrading from Drupal 6 to Drupal 7, and trying out a few cool techie things as well.

I’ll put up one more blog post before I sneak away, but I thought I owed it to my loyal readers to let you know the thought process behind these changes, and the reason the site will be going quiet in August. Mainly, I want to make this website fun for me again, and I have a feeling if it’s fun for me, it’ll be fun for you.

Okay … I still have a few things left to say … one more blog post in a couple of days, and then I’m gone.