Up From The Blue by Susan Henderson 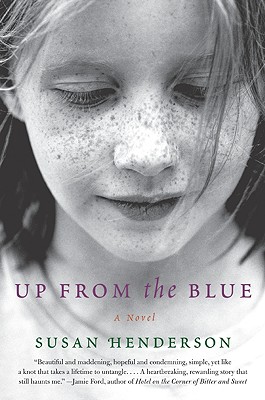 What happens to a close, loving family when one member of the family starts to go insane?

Writers have dealt with this before. Sometimes it’s a son or daughter, or a brother or sister, or a father or, as in Allen Ginsberg’s Kaddish or Susan Henderson’s new novel Up From The Blue, it’s a mother. Up From The Blue is narrated, Scout-style, by an inquisitive and charming little girl named Tillie Harris who lives with her taciturn older brother, her stern military father and her unpredictable mother, whose illness is worse than any outsiders could imagine. We discover the parameters of the problem as frightened young Tillie does, cringing as she wishfully tries to solve the problem herself and negotiate her mother back from the edge.

The irony of Henderson’s setup is that Tillie is enraptured by her exuberant, artistic mother, who has completely given up on taking care of herself or the children in some strange, hallucinogenic form of protest against the mundanity of her suburban life. The two males in the family, meanwhile, are simply closed doors, emotionally null and void — this is how they react to the insanity in their midst, and it renders them nearly as dysfunctional as Tillie’s mother. She can hardly claim to be the only sane one, either, since she’s developing a scary habit of acting out her own antisocial tendencies in school. Up From The Blue shows us a family that’s a complete mess, and the stark honesty and realism of the portrayal is one of the book’s achievements.

Somehow, the family hangs together; somehow, as real families do, they survive. They even manage, at unexpected moments, to nurture each other. They feign normality to the outside world — the world of mid-1970s America — but Tillie’s eager attempts to make friends at school are invariably mangled by the fascinating, weird secret she keeps at home. She tries to honor her elusive mother by taking her side against her father’s cold wall of denial, only to discover colder truths about her favorite person in the world’s capacity to love her back. We see Tillie as a grownup, still a mess but now a functional mess, ready even for self-fulfillment, ready even to forgive.