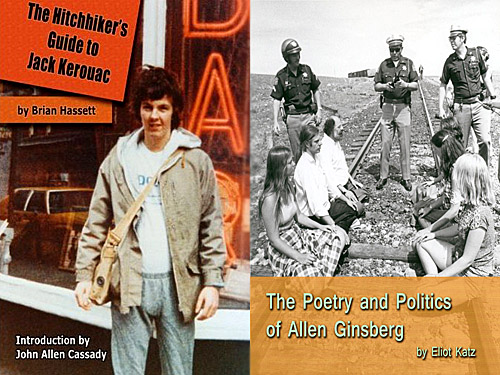 What does “Beat Generation” mean today, 60 years after Michael McClure, Gary Snyder and Allen Ginsberg rocked a San Francisco crowd with a world-changing poetry reading, and 46 years after Jack Kerouac’s wan and befuddled death in St. Petersburg, Florida? And what, I wonder, does it mean personally to me 21 years after I founded Literary Kicks as a “Beat Generation website”?

I have no answer to this question. The question is the answer. All I know is that the the legacy of Beat literature feels like a continuum. Some young people still feel drawn to the legacy today, not because it belongs to the past but because this particular past is still connected to our present and our future. Maybe there was a low-point when Beat literature seemed cold and dead. It felt nearly cold and dead in America during the Ronald Reagan 1980s — yet it was during those very years that I first wandered curiously into a midtown Manhattan auditorium to hear Allen Ginsberg read and sing some poems. It was a knockout performance (for a tiny crowd).

also takes us back to those lost years of the 1980s, when the hippie movement was fully replaced by disco and new wave and we were all supposed to get excited about stock market booms and MTV. Hitchhiker’s Guide opens in 1982. The author, a 21-year old former junior roadie for the Rolling Stones and Yes who is looking for his life’s next turn, wanders into a bookstore and spots a poster promoting a “Jack Kerouac Conference” in Boulder, Colorado. He heads in that direction, and that’s what this book is about.

Brian Hassett showed me some early drafts of this book, and I’m extremely proud to have been one of the first to say to him “Hey, Brian, this book really works.” The challenge of a road trip memoir is to capture the elation of an unpredictable adventure in all its raw ecstasy, and Hassett pulls this off with humor, honest simple emotion and bursts of wonky literary information. It happened that the Jack Kerouac Conference he wandered towards was an absolutely epic gathering, allowing his book to tell stories about William S. Burroughs, Gregory Corso, Jan Kerouac, Gary Snyder, Diane DiPrima, Ted Berrigan, Ken Kesey, Abbie Hoffman, Paul Krassner and (playing a concert nearby) the Grateful Dead. Here’s Brian’s first snapshot of one of his personal heroes, Ken Kesey:

His first event was a big press conference with Allen and Burroughs. And of course he’s late. Way late. I’d called him at the house where he was staying, and he promised they were just leaving. Like, an hour ago.

After much pacing and looking back and forth from my watch to the furthest cars driving anywhere near — Kesey finally just “appeared,” all alone, blissfully walking up the sidewalk … and I was quickly learning what was known as “Buddhist time” in Boulder: Things were supposed to happen at a certain time. Unless they didn’t.

You’re immediately struck by his size and stature, and I don’t just mean literary reputation. This was a big man — a wrestler with a tree-trunk neck, a barrel chest, and Popeye forearms; a mountainman with ruddy cheeks and glowing skin; but more impactful than anything was his ever-present smile, his big, easy and infectious laugh, and the Prankster twinkle perpetually flashing in his leprechaun eyes.

“Great. We drove 40 hours non-stop,” and he turned and smiled a wide one in pride at their Cassady-like achievement. In fact, I’d hear him tell people this for the next week. “All the way from Eu-gene,” he’d say, emphasizing the first syllable and not the second, like he always did.

This all sounded well and good and very On The Road and In The Spirit and all that, so I never broke it to him that I got here from Portland, which is furthur, in 42 hours — and I didn’t even have a car! Smoke that in your pipe and hold it.

Brian’s website lists who all was there in 1982, and I’m amused to see that Brian encountered another wide-eyed young Beat enthusiast named Eliot Katz there. Brian has written for Litkicks and Eliot Katz has too (this makes me wonder why my two friends Brian and Eliot both had the wherewithal to get to Boulder in 1982 when I didn’t even have a clue this conference was going on). Eliot Katz is now a serious poetry scholar and deeply dedicated peace and environmental activist whose latest book The Poetry and Politics of Allen Ginsberg

is published by Beatdom Books.

It’s easy to go deep with a topic like poetry and politics in the work of Allen Ginsberg, and Eliot dives joyfully in:

In this section, various sources of repression are grouped together and named Moloch, after the Canaanite fire god who was worshipped by the sacrifice of children, as mentioned in the biblical books of Joshua, Kings and Jeremiah. James Breslin notes that, in “Howl”, the figure of Moloch “stands broadly for authority—familial, social, literary.” Along these lines, Tony Trigilio writes that Ginsberg “builds systems that, paradoxically, attempt to undo the dominant impulse toward system-building.” But, although Trigilio, as a member of the Beat Studies Association, has written some of the most important and insight-filled recent scholarly work on Ginsberg’s poems, I think it would be a mistake to fit Ginsberg’s ideas into a kind of postmodern “anti-system” theoretical framework. Rather than opposing all notions of “authority” and “system-building”, it seems to me that it is the particularly repressive characteristics of actually existing authority and systems that Ginsberg is criticizing. Along these lines, the radical social psychologist Erich Fromm in ‘Escape from Freedom’ has distinguished between “rational authority” (as in a healthy teacher-student relationship or in a democratically accountable governing institution) and “inhibiting authority”, in which “superiority serves as a basis for exploitation.” Ginsberg, I would argue, does not rule out the hoped-for possibility of developing far more humane and democratic systems in the future. Indeed, in many ways it is the vision of just such a long-term possibility that I would argue seems to drive so much of “Howl”, as well as Ginsberg’s later work. In a 1965 interview with Tom Clark, Ginsberg made this point about system-building explicit: “Another century has gone, technology has changed everything completely, so it’s time for a new utopian system.” In “Death to Van Gogh’s Ear!” Ginsberg similarly describes this view—in humorous and poetic terms that are nonetheless substantively clear:

I enjoyed hanging with Eliot last weekend at a glorious poetry reading for Herschel Silverman. Unlike in 1982, I did have the wherewithal to get to this event, though I haven’t seen Brian since this summer in San Francisco. The inspiration is still all around us, still inside us, always evolving, always alive.