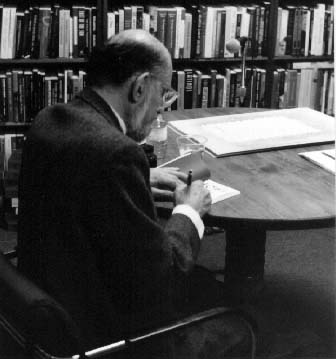 I spent today with my 70-year-old stepfather, a person who’s been a really positive force in my life and a good friend as well as a parental figure. He’s having a hard time lately, having just been diagnosed with a serious case of bone cancer. My mind was buzzing with some news I’d heard last night, that Allen Ginsberg — who’d also just been diagnosed with a severe case of cancer — had “taken a turn for the worse.” It was kind of a “dark cloud over my head” day.

I came home about 8:30 and heard that a friend had called. Since this friend was a friend of Ginsberg and hardly ever
called me, I knew what this meant. I checked my email, and there it was, in a hundred subject headers.

According to the Tibetan Book of the Dead, he’d be sailing around the first Bardo (or something like that) by now. This is a really amazing book, if you’ve never read it. It’s an instruction manual for how to die, and it describes in detail the cosmic journey your soul takes as your body begins to accept your death and your mind begins to break free and float away. It describes what you will see and feel as you make this journey:

“From the heart of Amitabha, the transparent, bright red light-path of the Discriminating Wisdom, upon which are
orbs of the same nature, — leaving neither the centre nor the borders of the red light-path unglorified with orbs and
smaller satellite orbs,– will come to shine …”

And it warns you what to avoid, what demons will try to distract you:

“Be not fond of the dull white light of the devas. Be not attached to it; be not weak …”

And warns you not to succumb to the sin of self-pity, or to cling to what is now lost:

The book also describes in precise detail what odd or disorienting sensations will occur, so as to allow particularly sensitive people to “prepare” for the journey into death. There are pages and pages like:

“At the moment of death the empiric consciousness, or consciousness of objects, is lost. This is what is popularly called a ‘swoon,’ which is, however, the corollary of super-consciousness itself, or the Clear Light of the Void …”

So I figure … if what the Tibetan Book of the Dead says is true, Old Ginzy ought to be having himself a swinging time up in the First Bardo right now. I bet he’s already gathered a crowd around him.

Let’s hope what the book says is true.

Place of death: East Village, New York City
Time of death: 2:39 in the morning, April 5, 1997
Cause of death: Heart attack in combination with severe liver cancer.

Here are some more memorial pages:

Thanks to Michael Stutz for the photo.