Gershwin and Heyward’s Porgy and Bess 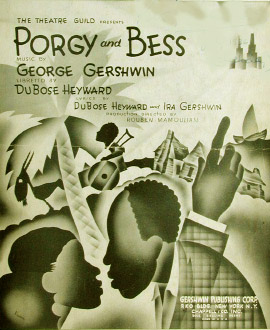 I went to see a new production of George Gershwin’s Porgy and Bess at the Lyric Opera in Chicago. I like to go to the opera, but I can only afford to sit in the cheap seats in the second balcony, up in the very stratosphere of the opera house.

You can still experience the full pageantry of an opera in these seats. The acoustics in the Civic Opera House are so good that the sound quality is excellent as far away as row Z. The problem is it’s difficult to see the singers. Most cheap-seaters bring opera glasses or binoculars and spend the whole time looking through these gizmos. I scoff at these people. To me, the singers, seen from the second balcony, look like an opera company in miniature. I imagine that I am watching an opera performed inside one of those glass globes that you see at Christmas, the ones that if you turn them over and shake them, cause a snow storm to fall on the village within. The tiny players, although small to the eye, have magnificent voices that carry all the way to my seat in the highest altitudes of the theatre.

My fantasy intact, I settled in. The orchestra started. The curtain went up on act 1, scene 1. I was transported to Catfish Row, the fictitious black community in Charleston, South Carolina, where the story takes place. Clara, the wife of Jake the fisherman, is singing a lullaby to her baby. The lullaby is the most famous song from the opera – “Summertime” – a song that has been recorded by everyone from Duke Ellington to Janis Joplin.

The opera tells the story of Porgy, a crippled beggar, who falls in love with the drug addicted Bess. Porgy tries to get Bess away from her pimp, Crown. For a while he succeeds, only to lose her to Sportin’ Life the drug dealer, who lures Bess to New York. At the end of the piece Porgy vows to set off for New York to search for Bess. In between are great Gershwin songs such as “It Ain’t Necessarily So” and “I Got Plenty o’ Nuttin’ ”.

Porgy and Bess is George Gershwin at his finest. Although technically an opera, Porgy and Bess has the feel of a musical, and opened first in New York on Broadway. The music is influenced by jazz, blues and spirituals. Gershwin himself called it a folk opera.

The opera is based on the novel Porgy

by DuBose Heyward. Porgy was a best seller in the late 1920s. Gershwin read the book and thought it would be the perfect vehicle for an American folk opera that he had been planning to compose. He contacted Heyward, but initially no agreement was reached. In the meantime, Heyward and his wife created a non-musical play based on the book, which had considerable success on Broadway. The Gershwin opera didn’t come together until 1935, when it was first performed in New York, to mixed reviews.

DuBose Heyward was a white man, a Charleston insurance salesman turned writer who was heavily influenced by the primitivism artistic movement. He and his wife spent a great deal of time observing the black culture of Charleston, which represented to them the non-European innocence that primitivism idealized. When the book Porgy came out it was hailed by some critics as a breakthrough – the first Southern novel to depict black characters in a realistic manner, celebrating the black culture rather than looking down upon it.

Ironically, when the opera Porgy and Bess came out, it was criticized as being racist, portraying blacks in a negative and stereotypical fashion. This despite the fact that Gershwin used an all-black cast to mount his production. This criticism has followed the opera throughout the years. For example, Harry Belafonte turned down the starring role in the Otto Preminger film version because of what he felt was racist portrayal of black people.

Looking at the story from seventy-some years on, the characters have more of a period piece feel than anything else. But there is no doubt that they can be seen as negative stereotypes: Sportin’ Life the manipulative drug dealer, Crown the brutal pimp, Bess the drug-addicted prostitute. All are negative images of the black ghetto. Yet the story transcends this rough milieu to show the love of Porgy for Bess, despite his handicap and despite Bess’s many problems.

The portrayal of black characters on stage has come a long way since the 1930s. Gershwin certainly advanced the cause. He produced his opera using classically trained black singers, at a time when white actors in blackface, such as Al Jolson, played the African-American parts. Slowly, but with great difficulty, black culture has entered the mainstream. First it was music, with jazz permeating America, followed by blues and its white offspring rock and roll, and finally hip hop. In theatre, film, and politics black people have risen to the forefront. The obvious example now is our own president. Characters like Crown and Sportin’ life still exist in poor black communities, but they also exist in poor white and poor Hispanic communities as well. Gershwin chose the story of the black residents of Catfish Row because it went with the music that he wanted to create.

The music is reason that Porgy and Bess has survived, and has become a part of the repertoire of the major opera companies. Gershwin recognized the genius of the black musical forms, and wove these forms into operatic music that is unique and enduring. He was able to create an opera that is truly American, by using and adapting America’s true folk music: jazz and blues.