Enoch Soames on Twitter, or The Devil Went Down To The British Library 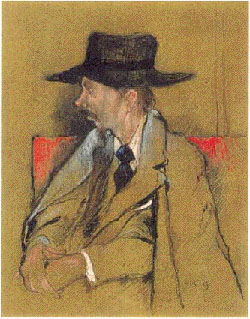 There’s a short story by Max Beerbohm, published in 1919, that sometimes comes up in philosophy classes. “Enoch Soames, a Memory of the Eighteen-Nineties” tells the story of Max Beerbohm, the author-as-character-within-the-novel, and his encounter with Enoch Soames, an unsuccessful writer and hanger-on in the London cafe scene in the 1890s. Enoch is frustrated that no one recognizes his genius, so he makes a deal with the devil to go forward in time and read about himself in the future where, he is sure, history will vindicate him.

In due course he and Max meet the devil himself in one of the cafes, and Enoch disappears, to pop up in 1997, where he searches the British Library to find out what we’ve thought of him. Some time later, he reappears back in the cafe, despondent. Before the devil spirits him away he explains to Max that he found only one reference to himself, in a work of fiction — a short story by Max Beerbohm! And then he and the devil disappear. Max-the-character explains that he feels compelled to write this story about Enoch, as it will be the only way his friend will be known at all, despite the fact that it will be classified as fiction. He begs us to take it as biography.

The philosophical problem is, who and what is Enoch Soames? Within the framework of the story, are we to take him as fictional (as we do, and as the author-as-author does), or as “real,” as both Enoch and the author-as-character insist that we should? The logical knots in this seemingly simple puzzle have yet to be fully untangled.

But meanwhile, while the philosophers sort things out, I decided to bring Enoch “back,” on Twitter. I have been intrigued with the fictional and performative aspects of invented online identities for some time. I have a few avatars, a number of blogs as different characters, and several Twitter accounts, including myself (or should I say, “myself”), and an historically real person (Adele Hugo) who has been dead for almost a hundred years. In opening up the Enoch account I realized that virtual reality was the perfect place for a fictional character who insists on his own reality.

So Enoch tweets from his vantage point in cyberspace. He is telling his story, but I am not doing a simple re-posting of the Beerbohm book. There are a number of “novels on Twitter” now, where novels or journals are tweeted, 140 characters at a time. [For pre-existing journals see @georgeorwell and @jqadams_mhs, and a sample of Twitter novels can be found here]. There are also people writing novels through Twitter, such as this offering by Pauls Toutonghi.

What I am doing is different. I am writing, not a novel, but Enoch himself, as a re-enactment or performance, a kind of “novel-less” character. He still critiques and reacts to the art world of his time, which included a number of flamboyant heavy-hitters: Aubrey Beardsley, John Keats, J.M. Whistler, and Walter Sickert, to name just a few. (He has a lot of past scores to settle!) But Enoch also reacts to today’s culture, and has found many sympatico writers and artists in the intervening century that support his point of view, and share his worries about existence. His main interests are the arts, reality, fame, the devil, and the existential dilemma presented by the idea of nothing (or should I say, “nothing”). Of course Enoch loves Nietzsche! But he also loves fan fiction, Henry Darger, MMORPGs, the web, and print-on-demand books.

However I am also writing some “real” books as part of this project, Enoch’s books, which are described in the Beerbohm story. “Real” is in quotes because although my writing them makes them real, it also negates their reality because they will not be written by Enoch!

“Negations” is drafted and will be released in spring 2010 as an artist’s book, a limited-edition letterpress multiple. “Fungoids,” Enoch’s book of poetry, will come shortly thereafter, also as a tangible item, although in a less traditional format. And his third book, which doesn’t even get a title in the Beerbohm story, is a virtual one: it’s Enoch’s online chronicle, his Twitter and Tumblr postings.

Both “Negations” and “Fungoids” will be offered via Etsy on Enoch’s storefront. I will eventually offer the third book, essentially his journal, as an e-book after the Twitter/blog is completed sometime in late 2010. But there may be other virtual options by then, so we’ll see!

Enoch Soames can be followed on Twitter at @enoch_soames.

“Negations” and “Fungoids” will be available on Enoch’s Etsy storefront, spring 2010.

The Beerbohm short story is available as a PDF on Project Gutenberg.

An idea of the philosophical problems that Enoch has caused can be gleaned by studying the work of Alexius Meinong, Saul Kripke, and Scott Soames (no relation!).

Peggy Nelson is Artist-in-Residence on Hilobrow.com, and is on Twitter as @otolythe.