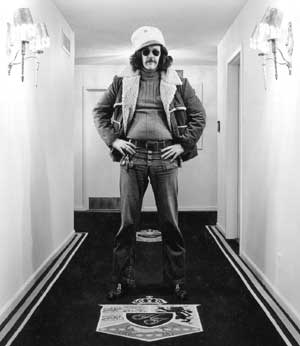 (Daniel Barth has written for LitKicks on writers like Richard Brautigan and Jack Kerouac. Here he introduces another underground favorite. — Levi)

If Tom Robbins writes the way Dolly Parton looks, as one reviewer has suggested, then Ed McClanahan’s prose resembles Dolly’s more voluptuous sister. McClanahan is the anti-Hemingway, a man who never met an adjective—or digression, aside, simile, extended metaphor, or play on words—he didn’t like. Here’s a representative passage from his latest book, O the Clear Moment:

It was just at that exact moment, as I was stuffing the last bite of my third triangular half of a grilled cheese sandwich into my mouth, that I fell utterly and irretrievably in love. Now the attentive reader may have observed that I tended, at that period of my young life, to fall in love rather readily: In addition to the omnipresent Betsy and her bevy of predecessors there had been, in rapid succession, two or three teenage Yosemite nymphets, Jayne Mansfield (a mere dalliance), my friend Jay’s lovely sister in Oakland, a couple more nymphets back in Yosemite, a dark-eyed senorita by the name of Marta in Juarez just three days ago (who, I was to discover a few days later, had presented me with a small but rapidly multiplying family of tiny migrant stowaways), and finally, only fifteen or twenty minutes ago, Mary, the goddess who quite possibly existed only in my own fevered imagination and in the wily machinations of a one-armed, stone-drunk Standard Oil distributor from Arbuckle, Oklahoma.

I first heard of Ed McClanahan in 1974 when I moved to Palo Alto and rented a room from Evelyn Barnes, a literary lady with a house full of books. When I told her I was from Kentucky, the first thing she asked was if I knew Ed McClanahan. I had to admit I had never heard of him. She told me he was a writer and that she had taken a creative writing course from him at something called the Mid-Peninsula Free University of Palo Alto. From the books in that house and the people I met, I found out more about McClanahan and other members of “the Kentucky Mafia” — Wendell Berry, Gurney Norman and James Baker Hall — who had preceded me to Palo Alto.

A few years later I came across a book called One Lord, One Faith, One Cornbread, edited by McClanahan and Fred Nelson. It was an anthology of writings by Richard Brautigan, Ken Kesey, Robert Stone, Vic Lovell, Judith Rascoe, Thom Gunn, Berry, Norman, McClanahan, Nelson and others, selected from The Free You, the literary magazine of the now defunct Free U. (By the time I got to Palo Alto, as Lovell later told me, “the circus had already left town.”) The two pieces by McClanahan included in that book were laugh-out-loud funny. They had the quality that Salinger’s Holden Caulfield talks about in Catcher in the Rye: “… you wish the author that wrote it was a terrific friend of yours and you could call him up on the phone whenever you felt like it.”

Yes, that was the way I felt about McClanahan’s writing. I didn’t call him up (by that time he had moved back to Kentucky) but I did keep an eye out for his other books. Unfortunately, in the 1970s there were none. In spite of the fact that a 1963 Esquire article had placed him in the “Red-Hot Center” of contemporary American literature, McClanahan’s publishing credits were limited to magazine pieces and anthologies. It was not until 1983 that his novel The Natural Man found its way into print, receiving very good reviews if not universal acclaim. This was followed in 1985 by Famous People I Have Known, a collection of nonfiction pieces that showcases what I see as McClanahan’s greatest strength, memoir as short story, with the author as self-effacing narrator-protagonist. If you’ve never read “The Day the Lampshades Breathed” or “Ken Kesey, Jean Genet, the Revolution, et Moi,” seek them out and give yourself a treat.

For quite a few years McClanahan, with an M.A. in English from the University of Kentucky and a Stanford University Wallace Stegner Fellowship on his resume, supported his writing habit by teaching creative writing. He was on faculty at Oregon State, followed by Stanford, the University of Montana and Northern Kentucky University. In the early 1980s he quit the education racket and since then has managed to survive as a writer and occasional guest lecturer, even though his two-book publishing spree was followed by another lengthy lull.

In 1996 Counterpoint published his A Congress of Wonders, comprised of two longish short stories and a novella. This was followed in 1998 by My Vita, If You Will: The Uncollected Ed McClanahan, which tracks his development as a writer, mostly through very enjoyable memoirs and gonzojournalistic efforts such as “Visions of Neal” and “Grateful Dead I Have Known,” the former containing, to my knowledge, the best sample in print of one of Cassady’s legendary “throwing hammer” monologues, and the latter an award-winning Playboy piece very much in the Hunter Thompson vein.

I did eventually meet McClanahan in Louisville in 2003 at an Insomniacathon produced by Ron Whitehead and Andy Cook at a club called the Rudyard Kipling. Both Ed and I were among the many writers and musicians invited to participate. I got a chance to chat with him after he read from a book he had just edited, a tribute to his late amigo Kesey, Spit in the Ocean #7. He was amiable as we talked about writers and California and whatnot. Several months later he was in California promoting that same book along with Kesey’s Jail Journal for which he wrote the Introduction. I drove to Sebastopol to see Ed and other pranksterish folk perform skits and readings in the Kesey spirit. I talked with Ed again that night and with Ken Babbs, Mountain Girl, Zane Kesey, David Stanford and good old Wavy Gravy, but the highlight was getting to go aboard and on top of the bus Furthur -— not the original, which still rusts contentedly in Oregon, but its more serviceable and very appealing namesake, a genuine work of art. Here’s how McClanahan describes it in his piece “Furthurmore” in My Vita:

“… an hallucinogenic little cream puff featuring everything from a man-sized Sistine Adam to a spotted owl to a radiant Sun God to Pogo to a school of surreal fish to the obligatory Grateful Dead death’s head to Oz-inspired lions and tigers and bears to Buddhas to totem poles to seagulls to the Silver Surfer—an eye-popping panorama of intertwined images and icons, all rendered in meticulous detail (‘Holy shit!’ marvels a tiny Tin Woodsman, standing agog on the Yellow Brick Road), all varnished to a shimmering high gloss, all interrelated to an extent that declares, in no uncertain terms, that what you see is the product, Gulley Jimson-like, of a single, unifying vision—Ken’s, of course—yet in such a wild array of styles and techniques as to make it abundantly apparent that every artistic talent within hailing distance had a hand in this paint job. Earl Scheib need not apply.”

Since meeting McClanahan, it’s hard for me not to think of him as Ed, or, again with a nod to Salinger and to the vernacular usage of our native state, old Ed. The bumbling but successful “nostalgic nitwit” persona he cultivates in print is not much different from the man one meets. There’s something sweet and friendly and welcoming about his prose and his presence. His mixture of humor, humility and pathos is hard to resist. A big part of his appeal is that he doesn’t come off as an important person but simply as one of the gang, one of us, who happens to be very good at telling about what’s been going on. He’s a thoroughly undeconstructed raconteur who, if he never was really at the Red-Hot Center of American letters (Who would want to be?) has nevertheless put together a very respectable body of work. His books sit comfortably on my Kentucky writers shelf alongside volumes by Robert Penn Warren, Jesse Stuart, Wendell Berry and others.

Old Ed’s latest book O the Clear Moment is another collection of memoirs in varying lengths. It includes “Fondelle, or the Whore with a Heart of Gold” from which the passage that opens this piece is taken. Fondelle Fontaine, “a showgirl from New York City,” slowly devolves into Arletta Skeens from the hills of West Virginia as young McClanahan learns a lesson or three in New Orleans and on the road. In “Hey Shoobie” and “Dog Loves Ellie” Ed takes on aging and death head on, fondly evoking the simple pleasures of small Kentucky towns during his formative years, and viewing the changes time and fate have wrought through a sympathetic psychedelic lens.

The book takes its title from Robert Graves’ “Fragment of a Lost Poem,” used as an epigraph to “Great Moments in Sports”:

O the clear moment, when from the mouth
A word flies, current immediately
Among friends; or when a loving gift astounds
As the identical wish nearest the heart;
Or when a stone, volleyed in sudden danger
Strikes the rabid beast full on the snout!

The clear moments occur, certainly, but just as apparent is the clarity and ability with which they are recounted. The technical skill with which McClanahan tells his anything but straightforward tales is impressive. He has learned his lessons from Faulkner and Stegner and others about the use of parentheses, space dashes, ellipses and the occasional semicolon. Behind the convoluted style and casual manner is the artistry of a master. His erudition is also easy to overlook. The ride is so enjoyable that the passenger may fail to notice references not only to contemporary culture and literature but to Shakespeare, Dickens, Byron, Dr. Johnson and the King James Bible.

McClanahan is now 77 years old. He has never been prolific. (“Writing is like performing brain surgery on yourself,” he says, “you definitely don’t want to do a rush job with it.”) I can’t help but wonder if O the Clear Moment will be his farewell effort. But he has pulled rabbits out his hat before. Word is that he is working on another novel, a sequel to The Natural Man he’s calling “The Return of the Son of Needmore.” With the combination of savvy and luck that have gotten him this far, old Ed is even money to last and get it into print by, say, 2015 or so.