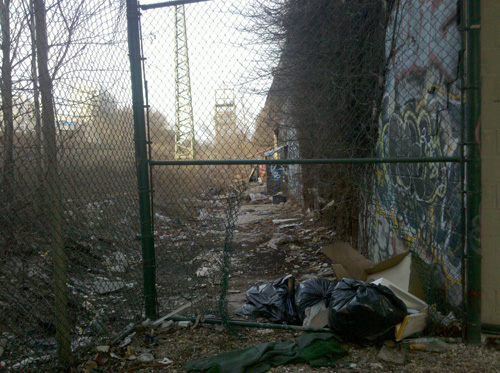 A couple of years ago I wrote a blog post titled In Gatsby’s Tracks: Locating the Valley of Ashes in a 1924 Photo, detailing my search for some exact locales described by F. Scott Fitzgerald in The Great Gatsby. Using the novel’s text and a zoomable historical map of Queens, New York, I was able to conclude that some vivid scenes described in the book took place at the triangle where a railroad and a street converge just east of the Van Wyck Expressway and south of the town of Flushing, Queens. George and Myrtle Wilson’s auto garage would have stood at this spot, and the haunting sign for eye doctor T. J. Eckleburg would have been visible at this spot too.

This blog post has become one of the most popular pages on Literary Kicks, and since I now realize that many people share my fascination with Fitzgerald’s “valley of ashes” I’d like to show you the photos I took while I was researching this locale, which I’d never bothered to put up before.

This small industrial neighborhood that sprouts underneath the Van Wyck Expressway overpass offers a unique urban vista that few people will ever see, though it’s only a few steps away from CitiField, the baseball stadium where the New York Mets play (CitiField replaced Shea Stadium, which was in the same spot) and, slightly further to the southwest, the US Open Tennis complex that comes alive every August for one of the world’s four Grand Slam tournaments. These stadiums are part of beautiful Flushing Meadows Corona Park, my favorite park in New York City, and a longtime literary inspiration for me. Flushing Meadows Corona Park was also the site of New York’s great 1939 and 1964-1965 World’s Fairs, built on the grounds cleared after the trash-burning operation described so memorably in the The Great Gatsby closed. 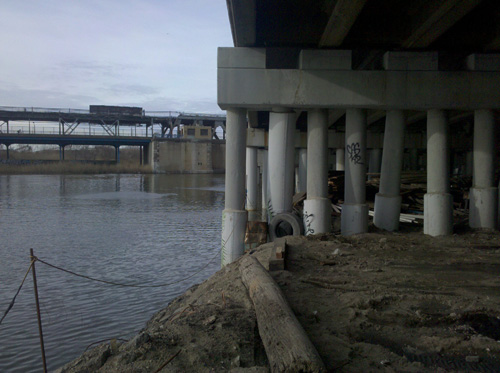 The entire complex of Flushing Meadows Park is west of the Van Wyck Expressway, and west of Flushing Creek. The spot where George and Myrtle Wilson’s auto garage stood is east of the highway and creek, an uninviting and anarchic tangle of small industrial streets. Visitors to the park or the baseball or tennis stadium are not encouraged to cross into this area, and few ever do.

An auto garage stands today on Maple Avenue, just east of the railroad/street juncture, exactly where the Wilson garage might have been. The town of Flushing, Queens now has a large Asian population, and the garage is today called “Dragon Auto Center Inc.”. Call me fanciful, but I like to imagine that in 1924 Fitzgerald imagined (or saw a prototype for) the Wilson garage at this precise spot. 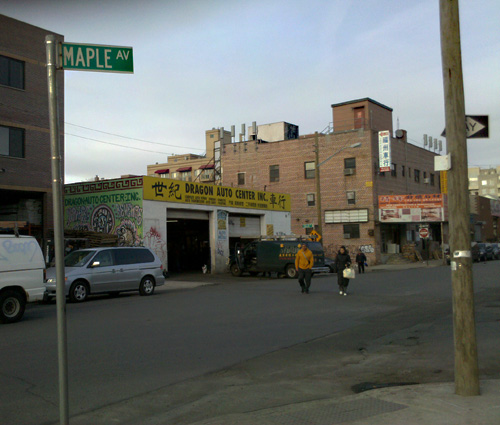 An oblique angle on The Great Gatsby‘s symbolism can be discovered in the fact that the triangular plot of land formed by the juncture of the Long Island Railroad tracks and Sanford Avenue now serves as New York City’s central marketplace and foundry for the manufacture of large signs and billboards. The entire triangle is occupied by a set of businesses collectively known as “Sign City”, along with a large Home Depot box store and a vast parking lot. 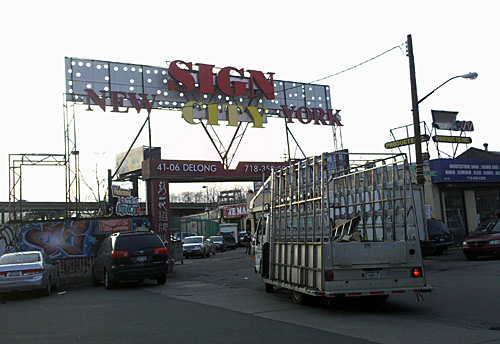 I can only imagine what semiotic-minded literary postmodernists will make of the knowledge — never revealed anywhere else, as far as I know — that the spot where Jay Gatsby and Nick Carraway saw a sign advertising eye doctor T. J. Eckleburg’s services might have been the spot where the sign was being manufactured, not the sign’s permanent home. 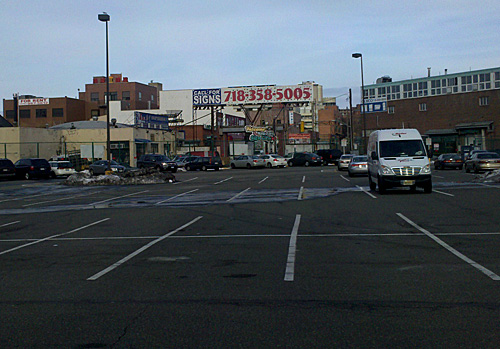 Signs are everywhere in this hidden, grimy section of south Flushing, Queens. There are also big billboards permanently installed for viewing from the Van Wyck Expressway for gambling casinos in Yonkers, Capital One bank, and Home Depot (this Home Depot sign is famous to baseball fans, at least National League fans, since it has been visible for decades over the outfield at Mets games). 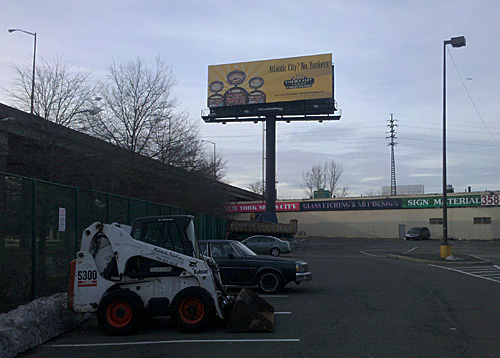 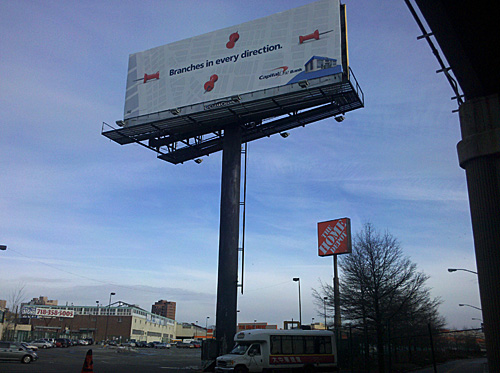 Here’s a view of the main road that crosses the creek, the road that Jay Gatsby, Tom and Daisy Buchanan, Nick Carraway and Jordan Baker would have taken for their fateful jaunt to the Plaza Hotel, and for the drunken ride back to West Egg during which Daisy Buchanan hit and killed Myrtle Wilson. Today, the road is shadowed by the overpass for the Van Wyck Expressway, a busy highway that connects Kennedy and LaGuardia airports and did not exist in Fitzgerald’s time. 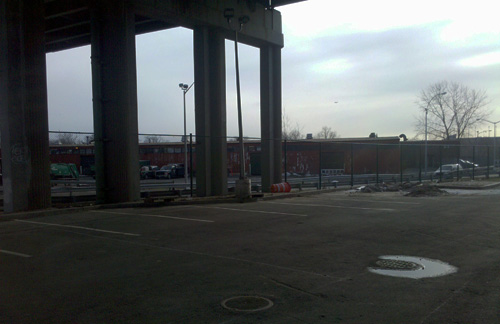 The CitiField baseball stadium can be seen across the creek here. 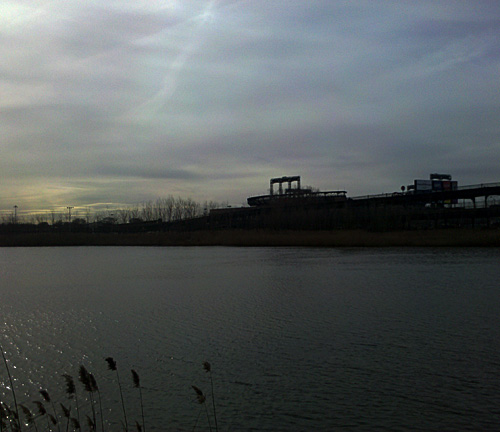 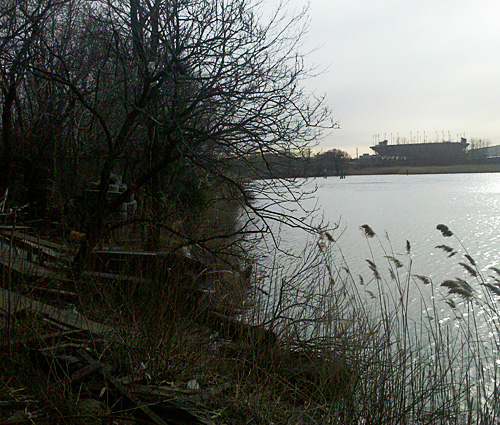 Is there literary significance to be found today by walking this industrial neighborhood, the gateway to the long-vanished valley of ashes? I think there is, because the decrepit streets offer the same contrasts to New York City’s social pretensions today that they offered in 1924, when Fitzgerald conceived his most important book. This unnamed neighborhood is the spot where civilization breaks down, where the unknown people scurry and toil. A passage through this “valley” is a passage through tawdry truth: this disarray is what underlies our proper world. And, as in 1924, it holds its own strange beauty, amidst the graffiti-strewn walls, concrete pillars, grimy factories, polluted streams, quiet walkways, winding train tracks and waving weeds. 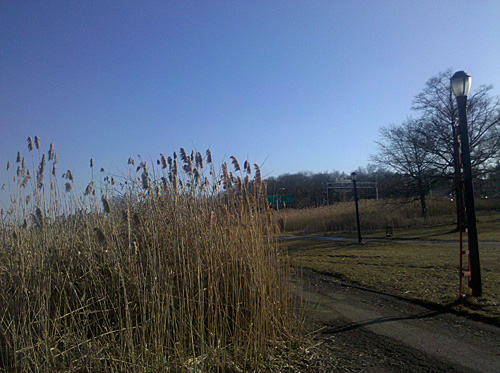