Doy, or the Etymology of Stupid 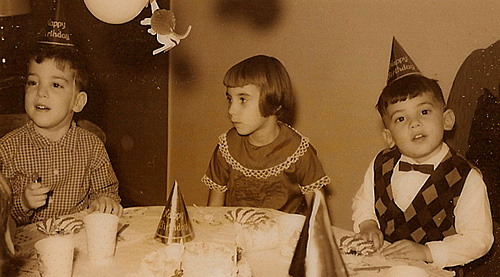 When I was a little kid on Long Island, we would always denote the fact that somebody was stupid, or had just said something stupid, by sticking a finger into a cheek and intoning “Doy”. Everybody in town had their own stamp on “Doy”: some would cross their eyes, twist their finger into their cheek and elongate the syllable until somebody told them to shut up, while others would give the word a Looney-Tunes-ish metallic boing, like “Doy-eey-eey-eey …” (repeat for several seconds).

I don’t know who invented “Doy”, but it seemed as natural as any other word, and we all assumed it was universally spoken. But my siblings and I had cousins from up in Boston, and one day when I was about 13 I remember my cousin Steve responding to some repartee from elsewhere in the room with a loud, percussive “DAR”. He actually gave this a resounding echo: “DAR-HAR-HAR”. There was no finger in a cheek. Apparently this is how they did it in Red Sox-land.

In TV comedies, Archie comics and other pop-culture outlets, I began to notice something else, simple and blunt: “Duh”. This usage gained some foothold in my hometown, but was never delivered with the passion or conviction of “Doy”.

As a student at Albany State in the early 80’s, I learned another variant, which was apparently de rigeur in the upstate territories of Buffalo and Rochester. This was a quick and reductive sound, nasal and glottal: “Uh – Dih“. The “Dih” was virtually never spoken without the preceding “Uh …” The tone was dismissive, the voicing almost effeminate. An English language translation would be “Um, you are an idiot.” I didn’t like upstate’s “Dih” anymore than I liked Boston’s “DAR”.

It all came to a crashing crescendo in 1989 when Matt Groening’s The Simpsons introduced “D’oh!”. Needless to say, I had never heard a “D’oh!” in my life. Matt Groening is from the Pacific Northwest.

My 15-year-old son recently introduced me to “Dididi” from comedian Carlos Mencia’s Mind of Mencia. This one sounds a lot funnier than it reads. It’s a sing-song pinhead-sound, best delivered with a perpendicular slicing motion of the hand to the forehead. I believe “Dididi” is a variation on the sing-song “Dee-dee-dee”, which is best intoned while skipping with your tongue between your teeth.

I would like to learn more about the “etymology of stupid”, and I might just have to email William Safire about this. One curious observation: given the near-universal use of the letter “d” to portray stupidity, one would imagine that other words about stupidity would also start with “d”, in the same way that words involving light so often start with “gl” (gleam, glimmer, glow, glare, glisten, etc. etc.). But only two come to mind: “dumb” and “dunce” — “moron”, ‘idiot”, “fool” and “ignoramus” contain hardly any “d”‘s at all.

To conclude this brief study, I’d like to ask: how do you denote stupidity in your hometown?