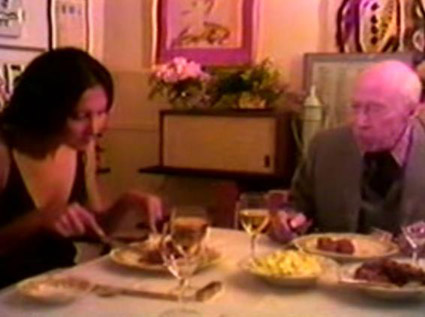 1. We told you about artist Malcolm McNeill’s Ah! Pook Is Here, a vast extended collaboration with William S. Burroughs, two years ago. Great news — the work is going to be published by Fantagraphics.

2. Sean Michael Hogan was one of the five winners of a writing contest we held on this site in 2003. He’s an excellent writer, and also an opinionated sports nut, and he’s combined both inclinations into an e-book, It’s Not Just A Ballgame Anymore. Here, also, is a short story by Sean about the frustrations of being a writer.

3. Clay January, aka Lightning Rod, was one of my favorite voices here on Litkicks during our crazy message board phase. The Rodster is now posting commentaries — sharp, as always — on his own site, The Poet’s Eye.

4. I didn’t know that the film The Hurt Locker originated as a poem by author/poet Brian Turner. He reads the poem in this video, and also explains what the title means.

5. Ron Kolm tells us about a new book called The Ass’s Tale by John Farris, apparently “a Rabelaisian story of a dog’s search for his identity, told in the existential down-and-dirty vein of Ralph Ellison, Ishmael Reed and Chester Himes” by a veteran of the literary streets.

6. Jason Boog wrote an article for Believer Magazine, Bohemian Rhapsody (preview only available here), about a bunch of poets who weathered the Great Depression by forming a collective called the Raven Poetry Circle.

7. “Why Franzen’s Freedom, though? What would Obama have done if handed a copy of Sh*t My Dad Says instead?” From D. G. Myers’ A Commonplace Blog.

8. Enigmatic young novelist Tao Lin has scored an impressive Time magazine cover parody at Seattle’s The Stranger, as well as an interview at swanky Black Book, which ponders whether or not he may have Asperger’s Syndrome. I’ve met him and I say he probably does — and he’s pretty good at milking it for all its worth.

9. I wasn’t sure at first about Washington Post book critic Ron Charles’s humorous new series of videos about books. I’m not sure why he has to play such a blatant (and grating) character. However, Charles is definitely hitting his stride with the third video (about e-books and the Booker Prize) . Really funny stuff, and a groundbreaking use of new media from an alleged newspaper critic.

10. I don’t know about some of these classic poetry parodies that go around. The .DOC File of Alfred J. Prufrock has a couple of transcendent moments, but I’m still telling you, I was this close to not bothering to link it here. This close. But, I realized, it’s not much worse than Christopher Buckley’s now antique spin on Allen Ginsberg’s Howl, titled Yowl, which has been getting pageviews on Litkicks for the past ten years. So I may as well link the Prufrock thing too. I also don’t know if this Hamlet on Facebook parody is quite as funny as it should be either, but what the hell, there it is.

11. Matthew Landis, who has written for Litkicks about Jorge Luis Borges, Antonin Artaud and other subjects, is asking for help financing (or, kickstarting, as they call it in the social networking world) a new musical project.

12. Another single-sentence animation from the folks at Electric Literature, art by Alice Cohen, sentence by Joy Williams.

13. The Arcade Fire’s The Wilderness Downtown web video asks you for location information, then uses map images from your hometown to illustrate the song.

15. Wind Up Guitar by Thurston Moore at the Whitney Museum in New York City.

16. For Moby Dick buffs: A young girl’s diary of a whaling voyage.

17. Postmodernism and Led Zeppelin: Everything is a Remix. They do know their Zeppelin.

19. Lydia Davis explains why we need (and she provided) a new English-language translation of Gustave Flaubert’s Madame Bovary.

21. A bunch of commenters are trying to guess the next Nobel Prize for Literature over at a Words Without Borders comment thread. I’m in there, offering up Paul Auster (a longshot right now, but I bet he’ll collect one someday) and explaining why I think Philip Roth won’t win. Other guesses: Haruki Murakami, John Berger, Elias Khoury. Who are your picks?

22. Here’s a video of a dinner conversation with Henry Miller in 1979, the year before he died (that’s him, reaching for the gravy, in the image at the top of this page). One of the topics of conversation: whether or not Henry Miller will win the Nobel Prize. He didn’t.

Home • Archives • About This Site