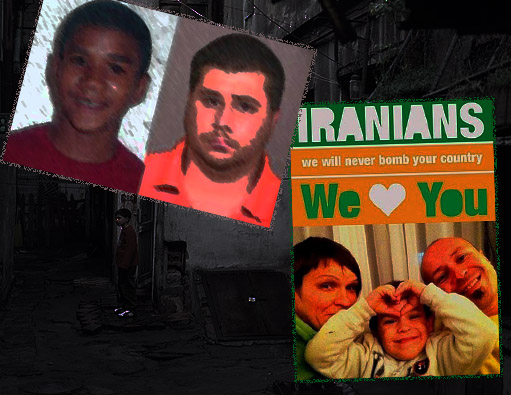 The impulse to groupthink has us all in its grip, every moment of our lives — whether we like it or not, and whether we admit it or not.  We can try to better understand the ways that social psychology affects the individual decisions we make and the private feelings we feel, but it is not in our power to remove these societal influences from our lives.  We might just as well try to survive without breathing air.

In the past week, the story of the murder of young African-American Trayvon Martin by an overzealous “Neighborhood Watch” volunteer named George Zimmerman in Sanford, Florida has shocked many Americans.  The first shock is the injustice of the crime — a friendly, helpless kid, armed with a deadly Skittle, falling into the crosshairs of a wannabe hero with a gun, a racist eye, and way too much time on his hands.

But George Zimmerman’s crime is not an individual crime, and the shadowy fingerprints of the “group mind” are all over this case.  Zimmerman was policing a residential area that identified itself as a gated community, and it was his membership in this gated community’s “Neighborhood Watch” program that made him feel empowered to shoot at a stranger.  When the Sanford police arrived at the scene of the crime, the officers amazingly came to the conclusion that Zimmerman must have been justified in shooting Martin, and even the top leadership of the police force concurred with this decision.  What seems at first to be the murderous act of a single deluded man turns out to be the deadly delusion of an entire city.

This is a familiar pattern in the annals of human atrocity.  The worst things we do to each other tend to be done by groups, for groups. Am I an advocate for collectivism?  Ha!  Most of the human crimes I spend my time speaking out against — war, racism, economic exploitation — are not crimes committed by individuals against individuals but by collectives, for collectives, against collectives. When George Zimmerman shot Trayvon Martin, he was shooting a person he didn’t know. The bullet was intended, in the words of an old bar-brawler insult, “for you and everyone who looks like you”.

Could I ever be an advocate for collectivism?  No, but I am an advocate for a broader understanding of collectivism, because the only way to mitigate the awesome power of groupthink in our lives is to understand it more clearly. This is why I have been writing about this topic so persistently in these weekend philosophy posts — I can’t think of any important feature of human life that is so poorly understood by all of us as our instinct to constantly think about groups, within groups, for the sake of groups — all the while denying that we do so.

Between the headlines from Sanford, Florida and the even worse news of a slaughter of 17 Afghani civilians by an American soldier — “for you, and everyone who looks like you” — it’s been a rough week in the news. But there’s another, smaller story making the rounds, the most wonderful and beautiful story I’ve heard in a while. As clueless politicians and pundits debate the “benefits” of a US or Israeli military strike against Iran to prevent the future deployment of weapons of mass destruction, a small group of Israeli and Iranian citizens have been exchanging public messages on Facebook, declaring from Israel that “we love Iran” and “we will never bomb your country” and, from Iran, “we do not want a nuclear bomb” and “Israel, we love you too”.

What a brave and pure message! Who had the courage to begin this phenomenon? To hear the word “love” in this context is so jarring, so unexpected … and yet it must be a basic fact of life that we all do love each other, at least a tiny little bit. If groupthink and the group mind leave us with bitter historical memories and lots of bad karma, it also gives us this common ground: we are human beings together, and we recognize each other as such. These friendly Facebook messages are being shared between people who don’t know each other, who will almost surely never meet, who only wish to be allowed not to hate and kill each other. “For you, and everyone who looks like you”. There’s still lots of hope in our screwed-up world.