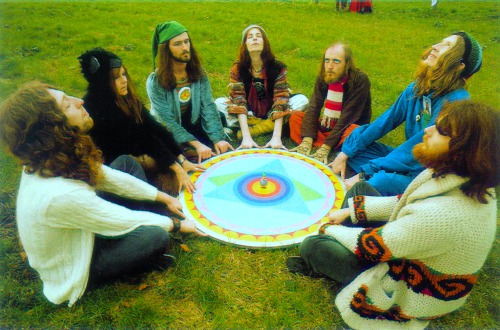 Update, March 13 2015: Daevid Allen has died, according to a message from his son.

Daevid Allen, a brilliant songwriter and archetypal hippie prog-rocker who co-founded Soft Machine in 1966 before reaching his peak as the mad visionary genius of Gong, has announced that he is dying of cancer and has six months to live.

I am not interested in endless surgical operations and in fact it has come as a relief to know that the end is in sight.

I am a great believer in “The Will of the Way Things Are” and I also believe that the time has come to stop resisting and denying and to surrender to the way it is.

I can only hope that during this journey, I have somehow contributed to the happiness in the lives of a few other fellow humans.

Many people have never heard of Daevid Allen, who wears a bright blue shirt and gazes skyward in the photo above. But those in-the-know prog fans who do know the music of Gong tend to be rapturous at the mention of his name. It was Daevid Allen who inspired the British band Soft Machine to name themselves after a William S. Burroughs novel, after which he drifted to Paris and teamed up with his muse and lover Gilli Smyth to create the musical collective known variously over the years as Gong or Planet Gong, or New York Gong (the punk-flavored variation that flared up in the late 1970s) or Mother Gong (the branch Gilli Smyth maintained on her own).

The lack of a hard core behind the band’s fluid identity expresses not only the band’s existential philosophy but also its musical approach, which was relentlessly experimental and international but always sweet, funny, approachable and optimistic.

Gong existed on a dynamic musical fault line: the lyrics were goofy and the cosmic imagery delightfully faux-naif, but the music was solid kick-ass jazz rock, tinged with theatrical flourishes reflecting influences from Ornette Coleman to Brecht and Weill to Edith Piaf. The remarkable sonic stew reached its peak in three great mid-1970s concept albums known as the Radio Gnome Trilogy. The very best of these three albums, in my opinion, is the delicious Angel’s Egg

, a little-known masterpiece that occupies a sonic ground somewhere between Zappa/Beefheart’s Bongo Fury, Pink Floyd’s Ummugumma and Preservation by the Kinks. A great video of the song “I Never Glid Before” from this album captures both the innocent sparkle and dramatic musical sophistication of Gong.

I never fully understood the fantasy/sci-fi plotline of the Radio Gnome rock opera, which deals with pointy-headed space aliens, Octave Doctors, a hero named Zero, a prostitute with a cat (memorably voiced by the fearless Gilli Symth) and a bunch of creatures known as Pothead Pixies, whose name is abbreviated as PHP on the comic illustrations that graced the covers of their 1970s albums. (I never found proof of this, but I always guessed that Rasmus Lerdorf, creator of the programming language PHP, must have been a Gong fan.)

I might never have heard of Daevid Allen or Gong, just as many people who think they know a lot about 1970s classic rock have barely any idea that this long-running creative collective exists. I only know about Gong because I long ago happened to briefly befriend a small community of obsessive young prog-rock fiends in a small Hudson Valley New York town who lived in a musical bubble and introduced me to the deep discography of serious experimental music from Brian Eno to early Genesis to Todd Rundgren to Gong, which made the biggest impression on me of all of these names. (I fell out of touch with this crazy group of friends, but later discovered that one of the ringleaders had morphed into the prog-rocker Phideaux Xavier, whose unique ongoing work continues to remind me of the genius of Daevid Allen.)

Indeed, Gong will probably live on through its influence on other artists, and if Daevid Allen dies in approximately six months as he expects to do, there will only be a gentle ripple of recognition around the world. The influence will be felt in large but subtle vibrations, like those of the ancient Asian instrument the band is named after.

Look up in the air
The Octave Doctor’s there!
And when he strokes his gong
Your middle eye comes on

In a moving interview at Blues.Gr just a year ago, Daevid Allen hearkened back to his early Beat inspiration to provide his own perspective on it all.

William Burroughs gave me excellent advice. He said: “Keep your bags packed and ready to go at all times”.

Daevid Allen, your friends around the world thank you for brightening our lives. We pray that your passage will be peaceful.