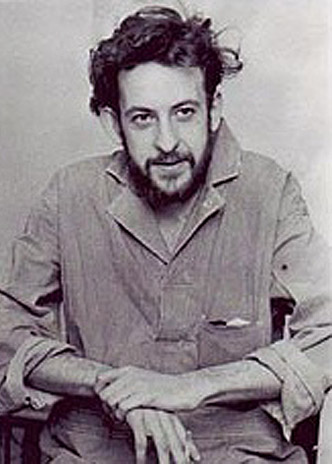 “they intend to murder you anyway”

In many ways the tragic story of d.a. levy mirrors that of the late ’60s. Born October 29, 1942 in Cleveland, Ohio, levy achieved both fame and notoriety in his brief career as a poet, pamphleteer, and counter-cultural icon. Influenced perhaps as heavily by the European Surrealists as by the Beats, levy was a major influence on the underground press movement, producing scores of small books and magazines, the bulk of which he gave away on the streets, using only a primitive hand press (and later, a donated mimeograph).

The son of a Cleveland shoe salesman, levy joined the Navy as a medic shortly after graduating from high school in 1960, and was discharged after only seven months of active duty, due to “manic-depressive tendencies”. He then apparently rambled about for several years, travelling to Mexico at one point, before returning to Cleveland, where he managed to scrape together enough money to buy “a 6×9 letterhead hand press”, which he set up in his aunt and uncle’s basement.

levy later claimed that “… in June 1963 (in Mexico) i became a poet … a man stopped hating me because i was an American and listened to me because i was a poet – it left me awed to receive for a few moments the respect my country had denied me.”

levy saw it as his mission to bring cultural enlightenment to the city of Cleveland. To that end, he established the Renegade Press (later called Seven Flowers Press), “printing sometimes 8 to 16 hours a day for days and days.” In addition to his own work, levy printed works by Charles Bukowski, Ed Sanders and others; he also produced limited (pirate) editions of classic texts which influenced him, works by Rimbaud, Camus, W. Y. Evans-Wentz, Artaud, etc.

By 1966, levy had achieved notoriety in Cleveland because of his public stands in favour of marijuana legalization and against the war in Vietnam. That autumn, he was secretly indicted by a Cleveland Grand Jury for distributing obscene materials. In January, 1967, the indictment was made public and levy was arrested along with friend and patron James Lowell, owner of an alternative bookstore which carried levy’s work. Bail was set at $2500, money levy — who’d held only one paying job in his life — didn’t have. Jack Ullman, a physicist levy had met a year earlier while in New York City, heard of the bust and posted levy’s bail. In April, 1967, levy was arrested again, allegedly for giving copies of his poems to two teenagers at a coffeehouse reading. Subsequently, a defense fund was organized; donations poured in from poets across the country, and there were “Free levy” demonstrations in the streets of Cleveland. Allen Ginsberg and The Fugs came to Cleveland and gave a benefit reading. Ultimately, the charges against levy and Lowell were dismissed, but the experience left an indelible mark on levy’s soul. He became increasingly bitter, angry, depressed … suicidal.

Nonetheless, levy continued his prolific output, experimenting with Concrete Poetry, pushing the edge of expression beyond mere words in search of an inner language. Ingrid Swanberg, a friend of levy’s
who edited a collection of levy’s works (Zen Concrete & etc. ghost pony press, Madison, Wisconsin, 1991), wrote that “levy reduced the word to silence. He broke-up, cut-up, shattered, fragmented, pulverized the word in concrete poems, his silence erupting against the death carried by the word and the death carried by the image, as if to throw everything think-able into disruption …” levy apparently saw a connection between the implicit nihilism of his concrete texts and Buddhism; the influences of the latter were movingly explored by Gary Snyder in an essay, now available for reading online, called ‘The Dharma Eye of d.a. levy‘.

By mid-1968, levy had published over 55 books and nearly 30 issues of magazines. In October of that year, he was invited to spend a month as poet-in-residence at the University of Wisconsin at Madison. He then returned to Cleveland, in early November. His behavior had become increasingly disturbing: He sat in his apartment, holding a rifle, and asked “How symbolic would it be if I blew my brains out?” He burned manuscripts of all his poetry, 300 copies of Tibetan Stroboscope (a collection of concrete poetry), and several original collages, gave away most of his belongings, quarreled with his wife and threw her out, visited friends he hadn’t seen in years “to shake hands one last time”, and told people he was “leaving Cleveland. I’m leaving the world”.

Here is a bibliography of levy’s Works and here is a Cleveland-based e-zine, Deep Cleveland, devoted to this poet.