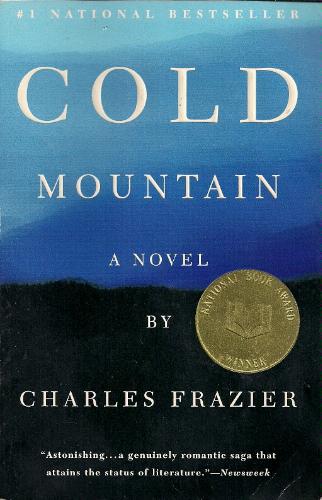 I just read Cold Mountain by Charles Frazier for the second time. I’m convinced this book stands very tall amongst all books recently published, and I would eagerly put money down that it will be considered a true literary classic by future generations.

One reason this opinion may seem surprising to some is that Cold Mountain was a #1 bestseller, and contains many elements of “genre fiction”: a steamy love story, a picturesque travelogue, a few morose battle scenes from the Civil War. The book was even subjected to the indignity of having Nicole Kidman and Jude Law dress up as its characters in a big Hollywood film (I have not seen this film yet, and I’ve been warned to just steer clear). There are echoes of Melville and Kerouac, but the book is clearly not the type of thing I usually go wild over. There’s nothing postmodern or alternative about it … and yet the fact remains that you could stack twenty DeLillo and Bukowski novels into a skyscraper and I’d still choose this book over the whole stack.

Okay, I’ll admit it. I like this book a lot, and the second reading blew me away even more than the first. I’ve been accustomed to saying Raymond Carver is the greatest living writer (which is supposed to be funny since Raymond Carver died of cancer in 1988), but the next time somebody asks me this question — who knows, I may just spit out Charles Frazier’s name. Here are the reasons why:

First, his talent for characterization leaves me awestruck. When I write fiction, I struggle to never create boring, stereotypical characters. This can be an uphill battle, but apparently not for Frazier. He simply turns out one vivid, complex portrait after another. A near-feral teenage girl with a prodigal gift for farming; a thoroughly immoral preacher who loses a wrestling match to a catfish; a witchy goat lady; a drunk who builds his own fiddle; a retarded boy who follows the fiddler around. Who are these people and how did they get so real?

Second, the book’s simple “country-style” narrative structure conceals some deft touches. I can pinpoint the exact moment when Cold Mountain won me over. It’s around page 58, when a preacher (not the incompetent one mentioned above, but the noble and high-minded father of the book’s heroine) leaves the big city of Charleston to take up the call in an abandoned parish in the mountains, and has to adjust to a much less sophisticated clientele:

“The houses were dark inside, even on a bright day. Those with shutters kept them pulled to. Those with curtains kept them drawn … Monroe would rattle on at great length, introducing himself and explaining his view of the church’s mission and talking theology and urging attendance at prayer meetings and services. All the while the men would sit in straight chairs looking at the fire. Many of them went unshod and they stuck their feet out before them with no shame whatsoever. For all you could tell by their bearing. They looked at the fire and said not a word and moved not one muscle in their faces as response to anything Monroe said.”

We think we know where the author is going with this, but two pages later we are suddenly exposed to the other side of the story, and discover that the mountain folks, far from being quietly resistant to their new preacher, are actively engaged in hilarity at his expense, playing tricks on him and whispering behind his back. They don’t like his superior attitude, and they’re insulted by his use of the term “mission”, since they themselves have contributed to charitable organizations that send Christian missions to Asia and Africa, and do not appreciate being thought of as requiring missionairies themselves.

This is the kind of feat few writers are capable of. Skateboarders call it a “360”, and it’s no less impressive in a novel taking place in 1864 North Carolina. The preacher and his neighbors eventually come to good terms, and the compassion and warmth the author presents in these scenes point to the moral and political message of the entire book. North Carolina was not highly committed to the Civil War, and the folks in this book are simply victims of the war in every sense. Caught between a slave-holding South and an industrial North, the people of the mountains are simply trampled. Their homes are invaded and overrun, their economies are destroyed, and anarchy rules the land. They can’t defend themselves, but they can retain their pride, and more than anything else that’s the message this book teaches.

You’ve probably noticed that I like this book. I should mention again that I haven’t seen the movie yet, but I have rented the DVD, so I may post some opinions on it shortly.