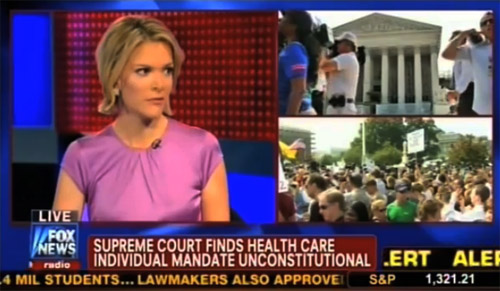 Okay, enough about what the US Supreme Court’s historic ruling to uphold Obamacare means for the country. Let’s talk about what our reaction told us about us. It sure was a strange reaction.

The decision was scheduled to be announced on Thursday morning, June 28, starting at 10:am. The first few sentences of the announcement appeared a few minutes later on the SCOTUSblog live stream, and as soon as the first sentences appeared, public hysteria ensued.

At least a full half hour of absolute hysteria followed, mostly caused by the fact that two cable news networks, CNN and Fox News, reported incorrectly that Obamacare had been overturned. The confusion was cleared up quickly, but now everybody was confused, and somehow the hysterical pitch of the first few minutes became the de facto tone of the news coverage for the entire day.

Even today, two days later, there is still an undertone of shock to all coverage and discussion of the Supreme Court verdict — appreciative and relieved shock on the pro-Obamacare side, and indignant, infuriated shock on the anti- side.

I wasn’t shocked. I’ve been following the healthcare debate closely for years, and I know the bill had been carefully designed to make it through the Supreme Court (the Obama administration is not stupid, after all). I was amazed that so many allegedly knowledgeable people were predicting that the Supreme Court would find ACA unconstitutional, because anybody who knows the history of the US Supreme Court knows how unusual a decision to overturn a law on such optional grounds would have been. The Supreme Court (as Chief Justice John Roberts would finally explain in his preamble) doesn’t have a history of challenging legislation at this level, and makes an effort to steer clear of partisan politics. The honor and reputation of the court would clearly be at stake if it made a dramatic decision to overturn such a major piece of legislation, and it was Chief Justice John Roberts’s responsibility above all to defend the integrity of the Supreme Court by moving cautiously.

In the days before June 28, I felt a rising panic that ACA would be overturned (despite my conviction that it couldn’t be), because I was reading so many other predictions that this would happen. During these days, I became angry at some of my liberal friends who seemed willing to take such a controversial Supreme Court decision lying down. If this happened, I said, it would be an outrage, and ought to promote the angriest protest since at least the Iraq War. Didn’t anyone see this? Finally, the night before the ruling, I read a short article by Tom Goldstein, publisher of the SCOTUSblog, that also predicted (against popular opinion) the same thing, and this filled me with enough confidence in my reasoning that I announced my prediction (and my agreement with Tom Goldstein) on Twitter:

Now of course I get to brag that I was right, even though I was blind-sided by Anthony Kennedy joining Scalia, Alito and Thomas on the dissenting opinion. But do I really have a right to brag? I have been wrong about things as often as I have been right. For instance, I was sure that Al Gore would become President in 2000, and I was then floored when we re-elected George W. Bush in 2004. I lost dinner bets on both. I have also been stunned many times to see the New York Mets lose postseason games, even after going through the trouble of logically proving to my friends why the Mets were certain to win. It’s happened to me a lot.

I like to think I’m a genius whenever I guess something correctly, but a book I’ve been enjoying, Jonathan Haidt’s The Righteous Mind: Why Good People Are Divided by Politics and Religion

, reminds us of the powerful role confirmation bias plays in all our political opinions and beliefs. We don’t develop our opinions and beliefs through cold logical analysis, Haidt points out; we develop them as constructions of our desired realities.

I like Haidt’s book because it’s sharply written, though I think these are the same points William James made more than a century ago, and I prefer the term “cognitive bias” to “confirmation bias”, maybe just because I like the synergy with another favorite phrase of mine, “cognitive dissonance”.

There’s nothing new about the concept of confirmation bias or cognitive bias, but it is still surprising to see the extent of delusion this bias can cause. The fury and outrage we heard from surprised anti-Obamacare conservatives on Thursday, June 28 was the exploding of a public delusion. All over the country, we heard the expressions of surprise about what should have been obvious on simple historical grounds. Our smartest politicians, activists, journalists, bloggers, tweeters, workplace-talkers and private citizens had really convinced themselves that the Supreme Court would overturn Obamacare, just because they wanted it so badly.

I shouldn’t gloat, because I have been the victim of my own cognitive bias, and I have suffered from my own delusions. As I wrote above, I had convinced myself on election day in 2004 that George W. Bush’s poor leadership of the Iraq War would result in the election of John Kerry. It sounds silly now, but several of my friends also truly believed it, and we all were as shocked as if the election had been stolen when the news informed us that we were wrong. This was my own cognitive bias, blazing away at full speed.

I’m a poker player, and I know I’ve seen a lot of cognitive bias at the poker table. Cognitive bias is the expert poker player’s best weapon, and he watches for every sign of it around the table. “My pocket queens looks so good. Of course it’s going to hold up, even though there’s an ace on the flop and this guy is reaching for his chips” ….

Is this fool even thinking about the odds? Somebody will be holding an ace, of course — the only way your queens will hold up is if you get a third one, dummy! Cognitive bias is what makes the game of poker work.

Cognitive bias plays such a gigantic role in our everyday lives that we can’t even say it’s a bad thing. It’s what keeps us moving. It’s helps us love each other. We probably wouldn’t be able to live without it.

But it’s amazing what happens when an entire portion of the population suffers cognitive bias at once. It’s a powerful influence on a single mind, but it can be cyclonic when it possesses our group mind. I think that’s happened more than once during this long tendentious national debate over health insurance reform in the United States, and I do hope the nation can start to calm down, give the cognitive bias a rest, give the new law a chance to prove itself, and see if it doesn’t all end up working out well. Call me an optimist; I think it will.