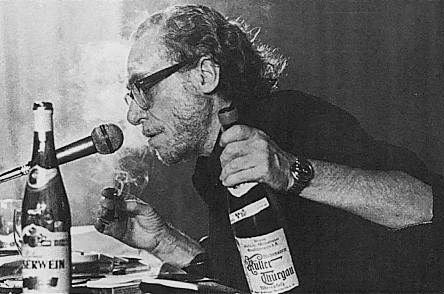 Charles Bukowski was born in Andernach, Germany on August 16, 1920 and came with his family to the United States when he was three years old. He grew up in poverty in Los Angeles, drifted extensively, and for much of his life made his home in San Pedro. Bukowski had been a writer since childhood, published his first story at age twenty four, and began publishing poetry when he was thirty-five.

Bukowski is generally considered to be an honorary ‘beat writer‘, although he was never actually associated with Jack Kerouac, Allen Ginsberg, and the other bona fide beats. His style, which exhibits a strong sense of immediacy and a refusal to embrace standard formal structure, has earned him a place in the hearts of beat generation readers, and the contributers to the alt.books.beatgeneration newsgroup. He was a prolific (it isn’t known how much he had written; much of it was sent off to publishers long-hand and never seen again), free-formed, humorous, and painfully honest writer. His topics included hang-overs, the shit stains on his underwear, classical music, horse-racing and whores. He was at home with the people of the streets, the skid row bums, the hustlers, the transient life style. His language is the poetry of the streets viewed from the honesty of a hang-over.

Most of Bukowski’s work is based on his own experience. In ‘Ham On Rye‘ we follow his autobiographical character, Henry Chinaski through his childhood and early years.

In ‘Factotum‘ we again find Henry Chinaski, now in his most vinuous days, wandering from city to city, from job to job, from woman to woman. Bukowski became widely known after the release of the movie ‘Barfly’, based on his life around the time Factotum takes place. Bukowski wrote the screenplay and was somewhat involved in the production of this film which featured Mickey Rourke in the role of Chinaski/Bukowski. ‘Barfly’ was produced by Francis Ford Coppola, whose current project is alledgedly a film adaptation of ‘On the Road’.

Prior to the release of Barfly, Bukowski was best known by the public at large, for his novel Post Office. Although Barfly brought Hank to the masses in a big way, Bukowski is primarily known in literary circles for his poetry. He has stated that he does not consider himself a poet, but simply a writer. “To say I’m a poet puts me in the company of versifiers, neontasters, fools, clods, and skoundrels masquerading as wise men.” He has also made clear that he does not like “form” in poetry, referring to it as “a paycheck for learning to turn the same screw that has held things together.” (This from sure, no. 3) If you are not familiar with Bukowski’s poetry, well, please judge for yourself :

The Blackbirds are Rough Today

There is a publication dedicated to Charles Bukowski called sure, which is erudite without being overly academic.

Charles Bukowski died on March 9, 1994 in his adopted hometown of San Pedro, California.