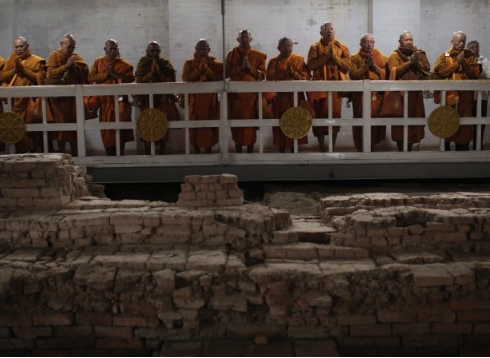 A surprising news bulletin made the rounds this week: “Incredible Discovery Reveals Birthplace of Buddha“. They did what? The story appears to be credible, though many Westerners like me who feel the significance aren’t quite sure how to react. Shouldn’t a discovery this momentous be bigger news? Shouldn’t it at least be accompanied by some kind of astral event or bright comet? (Oh, right.)

It’s strange to think of Buddha’s traces in the material world, though Prince Siddhartha Guatama of Kapilavastu was certainly a historical figure, and was a celebrated personality in his community even before he became the Enlightened One. His teachings are similar in many ways to those of Jesus of Nazareth, but their life trajectories were opposite. Jesus was born in poverty and anonymity, and died an early violent death after being hailed as the King of the Jews. Buddha was born a royal, but nobody thought of him as a Prince or King any more by the time he died peacefully at the age of 80.

Siddhartha Gautama was a great and inspiring philosopher — like Jesus, and also like Socrates — and his powerful words remain inspiring and relevant today. But his legacy is also widely misunderstood, and I often hear expressions of these misunderstandings among my family and friends. Some people are suspicious of Buddhism’s core teaching that desire is an illusion. Is it not our nature to desire, and isn’t it the lustful energy of our whole human race that makes us great?

Similiarly, some are offended by Buddhism’s emphasis on nothingness, which appears to point to nihilism or cosmic negativity. “The end result of Buddhism is death,” a serious friend with an earnest philosophical streak once told me. It was hard for me to find the words with which to turn aside his depressing misconception, which may have accurately reflected one single aspect of Buddhist wisdom but certainly did not capture the spirit or motivation of the whole.

I finally told my friend something like this: yes, Buddhist philosophers emphasize nothingness, but only because our world is so full of somethingness or everythingness that nothingness is not a viable threat. We ponder the meaning of nothingness in order to understand the world better, and to live in it better. Similarly, Buddhist philosophers preach that we must overcome desire, but evidence shows that we do not need to worry about taking this too far. Overcoming desire may look easy, but anyone who appears to succeed in actually overcoming desire is probably doing it wrong.

Buddhist teachings on nothingness and self-denial are valuable for the perspective and relief these teachings bring us in our everyday lives — lives that are filled with the trappings of existence and desire, but are too often lacking in peace or satisfaction or interpersonal understanding.

I’m sure there are joyless Buddhists in the world, but I have more often met joyful Buddhists, and it’s most significant that Siddhartha Guatama managed to live a long, peaceful and happy life. I wonder if the new discovery of an ancient buried temple under the Maya Devi Temple in Lumbini, Nepal brings us closer to the historical Buddha today. His physical relics may carry some meaning today; it’s his words that remain essential and alive, today and always.