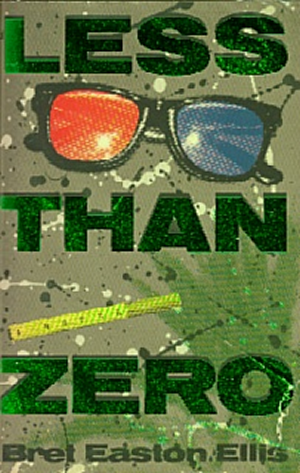 “People are afraid to merge on freeways in Los Angeles.” — Less Than Zero

Bret Easton Ellis published his first novel, “Less Than Zero” in 1985 at the age of 21, while still a student at Bennington College. The novel follows a college freshman, Clay, on his first trip home to L.A. from college at Camden, back East. The book made best-seller lists in spite of loud criticism, and so did his next book, “The Rules of Attraction.”

If “Less Than Zero”‘s descriptions of casual drug use, indiscriminate sex and seemingly commonplace violence gave leverage to complaints that Ellis’s writing was morally ambiguous and glorified moral flatness, “American Psycho” gave his critics an armory.

“American Psycho” was published in 1991 by Vintage Books after Simon and Schuster refused to publish the book and cancelled Ellis’s $300,000 contract. The gory and graphic tale of New York City yuppie/sociopath Patrick Bateman, propelled by controversy, wound up in movie theatres in 2000 as a major production.

In the wake of “American Psycho,” Ellis wrote only one book of short stories, “The Informers,” before finally publishing another novel, “Glamorama” in 2000.

Early in his career, Ellis was lumped with Tama Janowitz and Jay McInerney, and the three were dismissively labelled as the “brat pack,” young writers who supposedly had too much success and too little talent. Ellis’s early work was lampooned as nothing but thinly-veiled autobiography. Although Ellis did grow up in L.A., go to school in New England, and live in New York City, he has denied his work is autobiographical.

Although critics compared “Less Than Zero” to J.D. Salinger‘s most famous work, calling it “The Catcher in the Rye for the MTV generation,” such comparisons failed to address Ellis’s terse writing and intentionally minimal character development. Replacing what would in classical literature have been references to historical events or established literary works, references to numerous pop songs and performers, brand names, restaurants and clubs litter the pages of Ellis’s first novel, beginning with the title, which is lifted from the title of an Elvis Costello song.

Ellis’s subsequent works maintained the fascination with pop culture, and the author has proven an eerie ability to manipulate the bread and butter products of popular culture (Whitney Houston and Elvis Costello albums, Ray Ban sunglasses, MTV and Levi’s Jeans) into biting satire, creating scenarios that careen wildly between funny and frightening. Ellis created intelligent pop fiction that used elements of pulp writing and managed to create relevance for a young audience: an audience of disaffected Gen Xers who had grown up with MTV and video games in the wake of the sexual revolution.