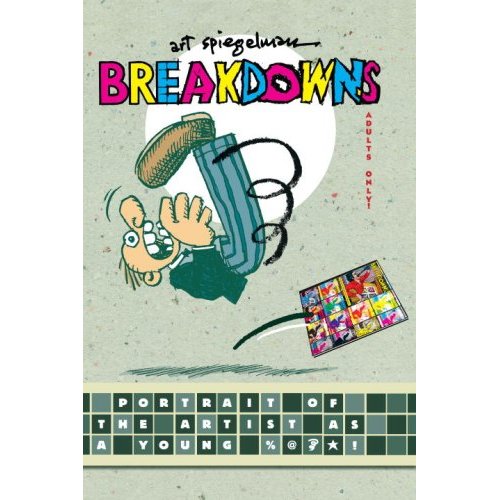 1. Art Spiegelman’s new comic autobiography Breakdowns is out and looks great. I don’t have room for the fairly gigantic book in my apartment, so I’ll have to read it at Barnes and Noble. You’ll find me in the Graphic Novels aisle.

2. Dan Green went and called Fyodor Dostoevsky “a terrible writer” over at his Reading Experience blog, prompting James Wood and many others to respond. Good stuff all around, though it gets a bit unhinged as these discussions often do. Based on my scoresheet, James Wood (in defense of Dostoevsky’s greatness) wins the argument by a wide margin. Admittedly not a hard argument to win.

3. Why Are Literary Readings So Excruciatingly Bad? Personally, I don’t think they have to be. My recipe for a good reading: add some poetry, some music and a lot of spontaneity and everybody will have a good time.

4. First Dan Green calls Dostoevsky a “terrible writer” and now A. N. Wilson is dismissing Jean-Paul Sartre as a quaint relic? Frank Wilson takes a few punches too (“Good riddance”) but I’m going to stand up for old Wall-Eyes. I do agree with both Wilson brothers (not really brothers, I don’t think) that Sartre can be a horribly boring writer, and that his novel Nausea is pretentious. However, his play No Exit (source of the line “Hell is other people”) stands the test of time and remains widely read. The diagrammatic comedy about Hell with cheap French furniture has also influenced many of our best playwrights, including Harold Pinter, David Mamet, Tom Stoppard and Peter Shaffer. Sartre’s brisk and mercifully short autobiography The Words also remains a popular read.

It’s also not true, as A. N. Wilson suggests, that Jean-Paul Sartre’s philosophy is not taken seriously. His Marxism was extreme and does not weather well today, but his psychology, his observations on relational ethics, phenomenology, consciousness and race and gender remain highly respected among almost all serious readers of philosophy. He retains his standing among the top Existentialist thinkers, alongside Kierkegaard and Nietzsche on many readers’ lists.

5. We’ll miss Paul Newman (and my favorite Paul Newman movie has got to be The Sting). I remember John Cassady telling me that Paul Newman was always his choice to play his father Neal in any On The Road movie.

6. Every once in a while, Gawker does something really good. Here’s 20 Movies About the First Great Depression To Watch During the Sequel. This would actually make an amazing film festival and I wish Gawker would sponsor it. Points for including Ironweed.

7. And while we’re hanging around Gawker … does the combination of this and this suggest a modest downsizing at the NY Times Book Review?

8. Maud Newton in Oxford with a dictionary.

9. Tomorrow evening will bring the newest installment of our October exercise in literary/political analysis, the Big Thinking series. Our special guest will be either David Hume or Count Leo Tolstoy — we’re not yet sure which one, and we hope they don’t stand us up like John McCain did to David Letterman.

10. Phish is reuniting! The last time I saw them was in 2002, and they did seem creatively exhausted at the time. Hopefully the time apart has given these four highly inventive musicians new angles to explore.

Hmm … Obama as President, Phish back on tour and, get this, Axl’s really going to release the new album. Maybe 2009 won’t be so bad.