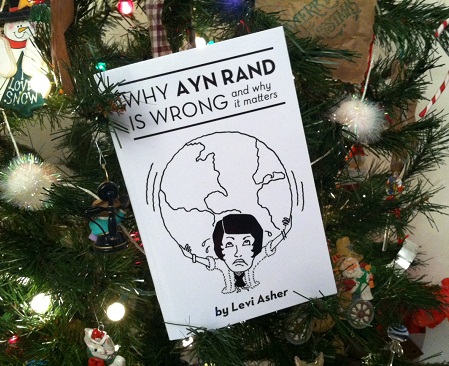 Finally! My book Why Ayn Rand is Wrong (and Why It Matters) is now available in three major formats: paperback

, iBooks (for iPhone or iPad) and Kindle

. I’m happy to report that the book continues to increase in sales every month, and retains very high numbers on several of Amazon’s lists (#48 in Philosophy, 8 months after publication — nice!).

More than anything else, I’m proud to have written a philosophy book (or a pamphlet, really — it’s only 50 pages long) that is being read by hundreds of new readers every month. I’m humbled to realize that I’m living the philosopher’s dream: my ideas about the meaning and limitations of Ayn Rand’s ethics are beginning to enter the popular discourse about her legacy. I’ve gotten a moderately positive response to Why Ayn Rand is Wrong from readers who do not have a lot of familiarity with Ayn Rand or Objectivism, and a strongly negative (but engaged) response from within the Objectivist community.

There have been a few bad reviews, and there’s a rambunctious dialogue still going on over at my Amazon page

. I don’t mind seeing negative reviews from serious Objectivists. It means they’re reading my book. Give them a few years … it’ll sink in.

If you are interested in philosophy, morality, ethics or the principles of modern liberal/conservative politics, or if you’re buying a holiday gift for someone who is: please do buy

in any of its exciting new formats (I can’t tell you how happy I am to finally see the book on my iPhone). Next week there will be more exciting news about new formats and a re-release of another Litkicks book! And, since you loyal blog readers have always been my unofficial “writer’s group” (and have helped me a lot with the publication of this book), here are a few links about writing or bookselling I’d like to share with the group …

1. Vanessa Veselka describes her season in the Amazon factory.

2. How To Become The Most Famous Poet In America Overnight, by Jim Behrle.

3. “Watch my back in a minute when I start talking about people pursuing MFAs and PhDs in poetry and creative writing; please, don’t let them sneak up and stab me with a rolled-up thesis draft they’ve whittled into a shiv …”. Tough-love for the MFA/poetry universe (and some amusing pictures).

4. The nature and future of bookstores has been a hot topic lately. Here’s Richard Russo on Amazon’s bad bookseller ethics, followed by Farhad Manjoo on why buying books on Amazon is better for authors, the economy, and you. Finally, Three Percent weighs in with Richard Russo, Bookstores and the Amazon Price Check Thing. I generally like the innovations Amazon has brought to book publishing, so I am not among the Amazon-bashers. But of course I dearly love bookstores, and I make a point of buying books in my favorite bookstores to help support their continued existence. I hope others do the same.

5. Meanwhile: Eden Lupucki explains why you should not jump on the self-publishing bandwagon.

6. Steve Almond explains why he is going ahead and self-publishing anyway.

7. Finally … Peter Winkler has to work harder to write his book than most writers I know, but that didn’t stop him from turning out a major biography of Dennis Hopper