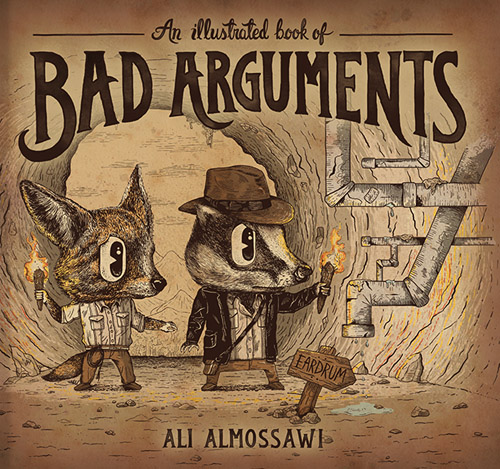 Here’s a timely one, to cap off a week of truly bizarre politics in my country, the United States of America. An Illustrated Book of Bad Arguments

by Ali Almossawi looks like a children’s book, with appealing and funny drawings by Alejandro Giraldo, but is written for grown-ups. Each page represents a different common form of logical fallacy.

Generously, the authors have placed the entire book online, where it can hopefully help to unwind all the bad philosophical arguments that are hovering thickly in the air. Logical fallacies are timeless and universal, of course, but this book feels especially relevant now, as my country moves cautiously towards implementation of the sorely needed health insurance reform law known as Obamacare, and free market conservatives, corporate lobbyists, Tea Party congressmen and Ayn Rand followers explode in fury.

I remember many of the fallacies listed in this book (like the Slippery Slope, and our old friend the Straw Man) from my years as a philosophy student. Most are self-explanatory (Hasty Generalization, Appeal to Fear). Each is explained in this book with text and a picture, and all can be viewed online.

Reading through these fallacies today, it’s easy to map many of them to the virulent arguments currently used against Obamacare (which is, I still insist, an essential program). Here are a few I recognize:

The Straw Man: Barack Obama is a Marxist Muslim with a secret program to destroy everything that is great about this country.

Not a Cause for a Cause: Greece is having severe economic problems, and Greece has universal healthcare. Therefore, Obamacare will turn our country into Greece and destroy our economy.

Slippery Slope: The new Healthcare.gov website has crashed repeatedly in its first two weeks of operation. This shows that the government is fundamentally incapable of ever operating a healthcare exchange, and that every aspect of Obamacare is likely to be mismanaged.

Circular Reasoning (or, Begging the Question): The enemies of Obamacare are going to make sure the program is not a success, because we oppose it. Therefore, Obamacare has no chance of being a success, and you should oppose it.

Appeal to the Bandwagon: Fox News and Rush Limbaugh and two loud guys I work with are against Obamacare. Don’t you know that EVERYBODY is against Obamacare? Alternate name: the Echo Chamber.

Okay, I’ll be honest: both sides of our current political debate and probably all sides of every political debate resort to bad arguments. I’m sure my fellow liberals have used a couple of bad arguments at some points in history too, though I can’t remember ever using a bad argument myself. Or is that an Appeal to Ignorance? Anyway, this is a book that anyone can enjoy.

Here’s a bigger question: why do we resort so often to bad arguments, and how do we choose which sides of which arguments to adopt as our own? Surely it’s not logic that primarily informs our stances on controversial questions. Rather, our stances are our starting points, and we sculpt logical arguments to support us wherever we stand.

So, when we argue, how do we choose where we stand? How do we decide which bad arguments to condemn, and which to applaud? That’s a tougher question that I’d like to tackle here soon.