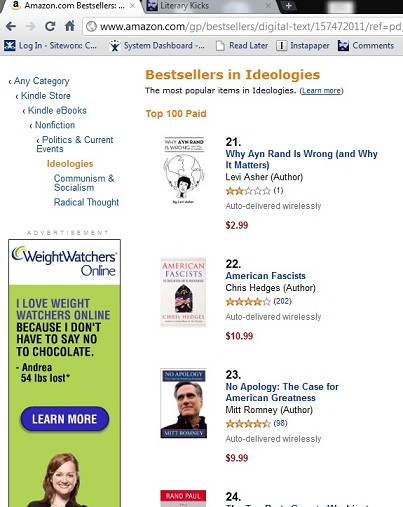 YES! Why Ayn Rand Is Wrong (and Why It Matters), the first Litkicks Kindle book, is generating some heat, climbing up the Amazon Political/Ideologies chart to number 21, which I am thrilled to note is two higher than Mitt Romney’s No Apology, clearly a less exciting work.

Thanks to my swell friends who tweeted me up and Facebook’d me up, and to Conversational Reading, Literary Saloon, Lightning Rod’s The Poet’s Eye and the great Maverick Philosopher for posting blog notices. (If you blogged about the book and I missed it, please send me the link).

One person (who I do not know) has already reviewed the book on Amazon. This is a lukewarm but well-written and thoughtful review, and I’m sorry the reviewer feels I “didn’t do my research” because I didn’t know that Ayn Rand had addressed the validity of psychological egoism. I know Ayn Rand has addressed this, but I believe she’s done so only superficially, and not satisfactorily. Indeed, that is the entire substance of my book: a critique of Ayn Rand’s ethics on the basis of her reliance on the (weak) scientific doctrine of pscyhological egoism. However, I do appreciate the fact that this Amazon reviewer named “poem2poes” took the time to read and understand my book, and I am happy to have survived my first Amazon bad review. (May the next one please be better.)

I have much else to talk about, but I’m very busy, and only have time for four newsworthy links today:

1. Jonathan Franzen’s New Yorker essay about a trek to Robinson Crusoe’s island and a search for understanding about his friend David Foster Wallace’s suicide is outstanding. So is the artwork that accompanies the piece.

3. Check out Glaring Through Oblivion, a new book of poetry by System of a Down singer Serj Tankian, lavishly illustrated by Roger Kupelian.

4. I’m participating in some cool, strange thing called the Raven Poetry Circle Wednesday night (April 20) in Greenwich Village, New York City — come down if you can! This is inspired by an article Jason Boog once wrote about an impoverished depression-era poetry circle of the same name that once haunted these streets. I’ll be reading a poem (or something), and so will Ed Champion, Rachel Kramer Bussel, Susie DeFord, Lisa Dierback, Guy LeCharles Gonzales, Elizabeth Keenan, Andrew Kessler and Jason Boog.