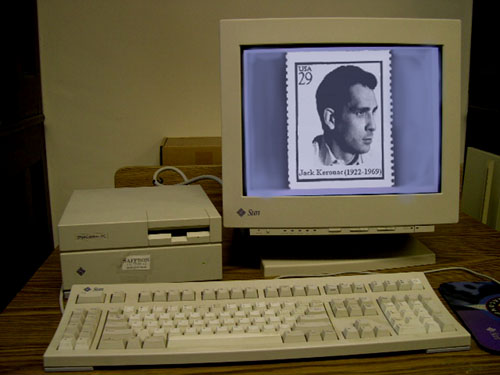 (Today is the 21st birthday of Literary Kicks. I’m making it my new habit to celebrate these birthdays with memories from friends of the site, so here’s Tim K. Gallaher remembering way back when. Tim is a former member of the 1970s San Francisco punk rock band Church Police who later became a biochemist at University of Southern California and a pioneer in computational modeling of neurotransmitter receptors and bioinformatics based gene discovery, as well as an expert in early Chinese literature. He has been participating (as “TKG”) in conversations here on Litkicks forever, and I met him for the first time one month ago. Thanks for the memories, Tim. — Levi)

21 years ago, the World Wide Web was so new that the University of Illinois Supercomputer Center put out a list every few days of literally all the new web sites that had just launched. So I saw Levi Asher’s Literary Kicks just days after it was born.

I’d been a huge Kerouac and Beat Generation aficionado and was amazed at the awesomeness of a web site about the Beats.

I was at a University and so was lucky to have full Internet access over a local Ethernet (i.e fast) network. I used the Mosaic browser, and sometimes the text-only Lynx browser via the Unix command line.

Levi Asher was about more than just this one website, though. He really turned me on the the possibilities and power of electronic publishing. He wrote stories for Web literary journals (that seem to have gone by the way side) called Enterzone and InterText. I liked his stories, and I liked that I could read them even though they’d never published in a book or magazine.

Levi was at the forefront of this, and he continued to practice his craft with a melding of media, using pictures and words to tell stories and create atmosphere in works like Queensboro Ballads. I saw in this an example of how the Web and electronic publishing could be used for a new synthesis in literature.

Levi then pioneered another electronic trend: the self produced independent movie. He made a movie of Fyodor Dostoevsky’s Notes From the Underground. He pressed it to CD and distributed it for view on a computer. I still have mine. A sample of this early digital movie can now be seen on YouTube.

But back then there was no YouTube to upload a digital movie onto. We were pioneering things, creating a new world that is fully extant today, yet still evolving.

Now people make their own electronic video content all the time and it is revolutionizing the entertainment industry.

I actually must have first communicated with Levi a few months after seeing Literary Kicks.

In 1995 there was America Online and bulletin boards where one called in with a modem over the phone line. I found a packet of sound files of Jack Kerouac reading at the BMUG BB, the Berkeley Macintosh User Group board. How great this would be for people to be able to hear these sounds on the web, I thought. What better place than Literary Kicks?

It wasn’t so easy to send binary files about the internet at the time. I took the Kerouac sound files, encoded them with uuencode, and sent them to Levi with my idea to add a page to his web site with the sounds.

I remember one of Levi’s e-mails and wished I’d saved it for posterity, but it’s gone now on my side for sure. He was able to locate a uudecode program and was able then to extract the files. Then he was able to play them and hear Kerouac speaking. It was like Alexander Graham Bell or Neil Armstrong — primitive and grainy, but he heard the sounds!

I ended up making my own web page, Kerouac Speaks, with the sounds. Litkicks included it in a Beat News update that is still there for posterity.

1. Several months ago a person named Tim Gallaher sent me an interesting bunch of .au files of Jack Kerouac’s voice. I’ve been meaning to put these files up in these pages, but Tim got tired of waiting for me and found his own web server to place them on, for which I am very grateful. Here’s the link. And to everybody else who’s getting tired of waiting for me to put your stuff up: I’m working on it, I promise …

2. Would you like to know why I’ve been so busy? I’ve been trying to finish my new web project, which I’M FINALLY DONE WITH!!! I’ve really been knocking myself out over this thing, and I’d really like it if you’d visit and tell me what you think. I’m not going to try to describe it except to say that this is my first attempt at truly expressing myself on the Web. It’s dedicated to the city where I live, it’s inspired by the music I listen to and the books I read, and it’s called Queensboro Ballads.

3. There’s a new internet mailing list dedicated to the Beat Generation. It’s called the BEAT-L, and you can subscribe to it by sending a SUBSCRIBE BEAT-L message to listserv@cunyvm.cuny.edu. There’s been some very interesting activity lately, and after three weeks there’s already a minor flame war going on.

4. Penguin is releasing a CD-ROM dedicated to Jack Kerouac. I haven’t found it in any of the stores here in New York, so I can’t say much about it yet, but there is a very extensive preview available at Penguin’s web site. Click here.

I like the coincidence that it was the same Beat News entry that introduced Queensboro Ballads and announced the launch of the now defunct but always legendary BEAT-L mailing list. The BEAT-L discussion community was a big part of my daily life for a long time, and was quite an experience.

About a year later Levi made the big time in the July 1996 Wired “Net Surf” feature. Here’s what they wrote:

A Bohemia of the Mind: Bust out the bongos and light up a cig — it’s time to dig the beat generation! The Literary Kicks page is a beautifully assembled shrine dedicated to all people, places, and things beat. Lit Kicks will give you the complete lowdown on the life, work, and travels of Ginsberg, Ferlinghetti, Cassady, Corso, and a host of other hep cats. You’ll also find rare photos, original fiction, and extensive lists of beat references in music, movies, and modern culture. Or, you can dig the starry dynamo of the night, listening to Kerouac recite selections from his novels and poems. Hop aboard the Nova Express and ride that train to www.charm.net/~brooklyn/LitKicks.html

Slightly smarmy and condescending, but nice as well. I found it funny in an ironic way that the cutting edge tech-savvy coolest of the cool hip Wired Magazine spoke of audio files on Literary Kicks, as if they couldn’t tell the difference between my audio-based site and Levi’s text and image-based site, which linked to mine.

There was always an interesting synergy between our two sites. Back then if anyone searched Kerouac in any search engine, my site and Levi’s were at the top of the list, and in fact were almost the only entries in the results. I got a counter software for my page and eventually made it to a million page views. That may not seem like much now, but it was something at the time.

Here’s the oldest iteration of Kerouac Speaks that Mr. Peabody has archived (circa 1998), at Archive.org.

And finally, I have to apologize to Levi for something that happened almost 21 years ago, and say, “Levi, you were right”.

It’s has to do with a great story in Queensboro Ballads called “The History of the California Burrito”. Levi talked about going to San Francisco and being forced to eat a burrito that contained vegetables such as carrots:

It was good. A bit crunchy, and too lukewarm. But I could relate to it. Brown rice and white beans and lettuce and avocado and barley and radishes and salsa … there was something tremendously integrated about it. I took another bite, and another after that. Now I’d reached the lentils and tofu sour cream and pinto beans and carrots. Carrots in a burrito! I can’t say I fully approved of this, but like I said, I was in a kind of crazy mood. And in this mood I suddenly understood the California Burrito. Inclusiveness was the philosophy. Foods have to learn to get along in the California Burrito, just like people have to learn to get along. It was like a political statement, with guacamole on the side.

Having grown up and lived in California all my life and eaten many a burrito, I was inspired to write Levi and say I have never had a burrito with carrots in it. They don’t put carrots in California burritos. For some reason I felt like informing Levi of this fact.

Well, all these years later, just recently I ordered a burrito near where I live. Lo and behold they’d put carrots in it!

Levi, the New Yorker, was right all along!

I should have never doubted.

Here’s to another 21 years of pioneering, Levi.