The Vortex: Beats and Rock and Punk 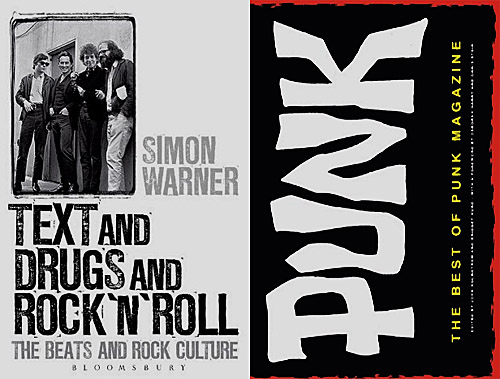 Two excellent new books remind me of the vortex of interests that’s always coursed beneath the surface here at Litkicks — a vortex, in fact, that is central to the literary/artistic sensibility that has fascinated and informed me through my whole life. These interests roughly include music and literature and art and poetry and comedy and New York City, and the two excellent new books are Text and Drugs and Rock ‘n’ Roll: The Beats and Rock Culture

by Simon Warner and The Best of Punk Magazine

I can’t actually review either of these books, because they’re too close to me (in two separate ways). Text and Drugs and Rock and Roll is a thick and extensive study of various connections between popular literary and musical underground scenes of the past several decades, including both essays and interviews by Simon Warner, a Beat Generation scholar who teaches music courses at the University of Leeds in England. This is a subject I have explored in depth here on Litkicks, and Simon was kind enough to include an interview with me in this book. I’m particularly proud to be in this book now that I see what a handsome volume it is, and I’m glad that I got to spout off a bit on why “Tangled Up in Blue” is a great example of Bob Dylan writing Beat, and why Jay-Z reminds me of Jack Kerouac. The book also includes interviews with Jonah Raskin, David Amram, Michael McClure, Michael Horovitz, Ronald Nameth, Jim Sampas, Pete Brown, Steven Taylor, Kevin Ring and the late Larry Keenan, as well as in-depth sections on Jim Carroll, Peter Orlovsky, Lawrence Ferlinghetti, Neal Cassady, David Meltzer, Patti Smith, Joe Strummer, Richard Hell, Genesis P-Orridge, Pete Molinari, Ben Gibbard and Tuli Kupferburg.

I’m not in The Best of Punk Magazine — but I did live this book. As a suburban New York high school kid in the late 1970s, I hung around CBGBs and Max’s Kansas City and Bleecker Bobs and Trash & Vaudeville and the old St. Marks Bookshop (on 8th Street) as often as I could, and the great Punk Magazine was the publication that captured the zeitgeist of these glorious streets. It was our Le Figaro, our Dial, our New Criterion.

Much of Punk Magazine’s hand-drawn and hand-lettered content was the work of two talented journalists, the smarmy Legs McNeil (later author of Please Kill Me, an oral history of punk) and the peppy cartoonist John Holmstrom, who had a distinctive retro style that recalled all the artists of classic Harvey Kurtzman-era Mad Magazine kind of mashed together. McNeil and Holmstrom’s highly original Punk Magazine helped to maintain the levity and innocence of the New York City scene during those years, and I highly recommend this book to anybody who wasn’t there and wants a fresh taste of what it was like. When I received my copy of the new book The Best of Punk Magazine I didn’t really have to read it, because I’ve already memorized all of it: the stealth Lou Reed interview rendered in Holmstrom’s gloomy cross-hatched chiaroscuro, the Legend of Nick Detroit starring Richard Hell, the wonderful Mutant Monster Beach Party starring Joey Ramone and Debbie Harry, the delightful marginalia, the sweet Top 100 lists that graced the endpapers.

The apotheosis of John Holmstrom’s comic style probably occurred when he illustrated all the songs for the inside sleeve of the Ramones’ third and best album Rocket to Russia. Not long after that Punk Magazine ceased to exist, and I’m pretty sure New York City’s classic punk age ceased to exist around the same time too.

However, the larger connections between underground literary and music scenes (as documented in Simon Warner’s book, which takes its title from an Ian Dury & the Blockheads punk song that must get mentioned somewhere inside John Holmstrom’s book) remain. I’m pretty sure the great cultural vortex is still swirling around us today. I can still hear the howl.