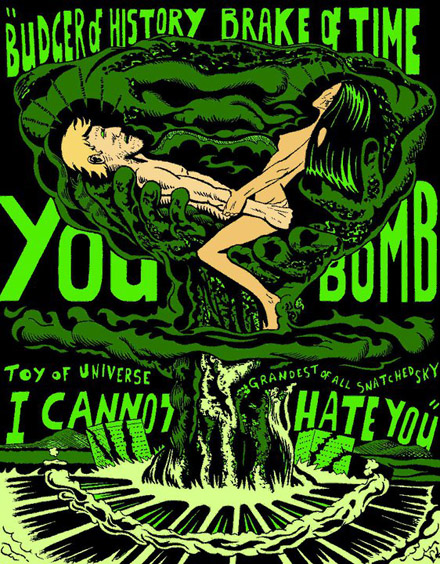 We’ll always circle back to our Beat roots around here. Here are a few things that’ve been going on.

1. I spotted the artwork above, a tribute to the epic poem BOMB by Gregory Corso, on a website by a young French artist named Vince Larue, which is mostly dedicated to 1960s culture and the Grateful Dead.

3. The Norman Mailer Center in Cape Cod, Massachusetts is presenting a workshop on the legacy of Hunter S. Thompson, featuring Doug Brinkley.

4. The University of Oregon is presenting a celebration of Ken Kesey on Friday, April 8. More details here.

5. Jerry Cimino of San Francisco’s lively Beat Museum is having a great time being an unofficial consultant (on Neal Cassady’s dance moves, among other things) for the upcoming On The Road movie, which will be coming out later this year.

6. Carolyn Cassady, the real-life model for one of the main characters in On The Road, is also telling her story her way in her own new movie, Love Always, Carolyn. Looks pretty good.

7. Should there be a movie about wandering poet Ron Whitehead of Kentucky? Hell yeah, so check this Kickstarter page if you want to help make it happen.

8. Back to the BOMB theme — and isn’t it sad how Gregory Corso’s ironic protest poem has turned out to be so evergreen? — here’s a great visual presentation based on Allen Ginsberg’s poem Plutonium Ode, created by Beat chronicler Tom Clark.

Anyway, regardless of theme or literary style, there’s nothing more Beat than indie publishing. Here are a few items that recently got our attention:

10. It’s the same story William Somerset Maugham once wrote, and James Hilton too, but it never gets old: New York writer Oliver Broudy’s The Saint, about a journey in India and Tibet, has gotten nice blurbs from Tom Bissell and Myla Goldberg and is becoming a Kindle hit.

11. A New York City kid learns about life from a homeless chess master and “eco-terrorist” in the third novel by our friend Mickey Z., Darker Shade of Green, published by Raw Dog Screaming Press.

12. There’s a real scattershot energy — free verse poems, prose snatches, furious text message conversations about whether or not to vote for Barack Obama — to Vanessa Libertad Garcia’s The Voting Booth After Dark, subtitled “Despicable. Embarrassing. Repulsive.” (None of which, actually, this chapbook is).