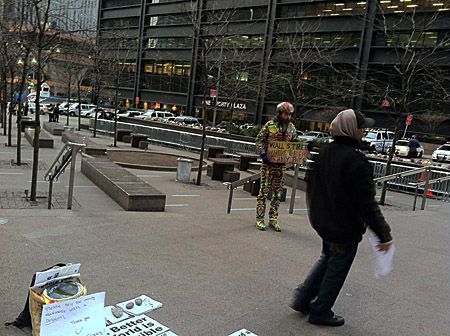 On a recent very cold day, I dropped by Zuccotti Park, the once-rollicking site of Occupy Wall Street during its first joyous phase (before the city shut the gathering down). I wasn’t surprised to find only a couple of isolated protestors hanging around on this freezing day, though I was surprised to find many cops still on the job, as if they were needed.

Despite the considerable chill in the air, everybody involved with Occupy knows that the movement has never stopped growing, and has not lost momentum. Instead, it has reacted to the loss of its original New York site by adopting an “occupy everywhere” approach. “It’s still happening all over the city,” said a guy tending a giveaway pile of pamphlets and Occupy buttons and a mostly empty donation jar near where I’d stopped to gaze upon the desolate plaza. “I know,” I told him. I had just come from the atrium at 60 Wall Street, where the working group sessions were as active as ever. I picked up some pamphlets from his stack, including one particularly good one: Anarchism by Andrej Grubacic and the influential political philosopher and economic historian David Graeber, whose Debt: The First 5,000 Years

I’ve been meaning to read. The pamphlet is a slightly less daunting Graeber volume, but no less relevant. David Graeber, one of the original personalities behind the original Wall Street occupation nearly six months ago, sees “anarchism” as the best word to describe the sensibility of the movement, and this pamphlet explains why. He and Grubacic make it clear in the opening pages that the goals they are fighting for will only grow organically, and gradually:

Increasing numbers of revolutionaries have begun to recognize that “the revolution” is not going to come as some great apocalyptic moment, the storming of some global equivalent of the Winter Palace, but a very long process that has been going on for most of human history (even if it has, like most things, come to accelerate of late), full of strategies of flight and evasion as much as dramatic confrontations, and which will never — indeed, most anarchists feel, should never — come to a definitive conclusion.

Sure sounds right to me. Meanwhile, a new YouTube video called Kony 2012, created by activist Jason Russell and his organization Invisible Children, aims to expose the vicious crimes of Joseph Kony and his Lord’s Resistance Army in Uganda and other East African countries. As of this writing, the 29-minute video has been watched over 74 million times. It was one of Jason Russell’s innovations to create this atrocity video in a nearly over-the-top hard-sell style, combining the slick production values of an E*Trade commercial with endless shots of his own cute tousle-haired son. All the high-tech gloss and personal self-indulgence is justified, apparently, by the need to do anything that works to raise global awareness of Joseph Kony’s crimes. The formula seems to work, and I sense the influence of Adbusters in this approach. That’s only one of several ways in which the KONY 2012 phenomenon appears to be related to the Occupy movement, though Russell’s movement has attracted support from all sides of the American political spectrum, and does not mention any connection.

The Occupy movement in New York City has not been the slightest bit dead, but it has been quiet lately, and I have a feeling it’s about to get louder now that warm weather is coming back. My friend Eliot Katz has alerted me to an exciting three day event next weekend at Pace University right near Wall Street. featuring (among others) Wallace Shawn and Dead Prez. Meanwhile, today’s blog post is just a teaser for an interview about Occupy, leftism, anarchism and other intense things with one of my very favorite current novelists — right here on Litkicks on Thursday morning. Come on by! The fun’s about to re-start.