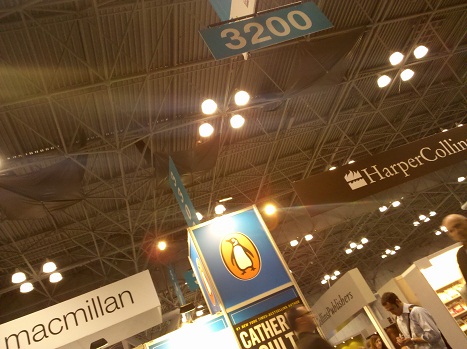 I’ve just spent three days at the biggest and most glorious nerd convention in New York City: the annual BookExpo America, or BEA.

This nerd convention is different from other literary nerd conventions like DragonCon and ComicCon in one major way: there, people dress up in costumes to try to look weird, while here editors, publishers, agents, writers, distributors, bookstore owners, librarians, critics and bloggers dress up in American Apparel or Urban Outfitters and try to appear normal for three days in a row. We’re not fooling anyone: we’re book professionals, and we’re all obsessed.

The great thing about this gathering is the wide, unabashed enthusiasm for books. From 9:30-in-the-morning panels to 2 am Soho parties, BookExpo is an intense, highly social experience. But even if the passions are highly individual, much of the constant shared buzz is about business, about the hot titles coming out from the big publishing houses. I noticed a somewhat strained effort to manufacture the word that a new novel called The Art of Fielding by Chad Harbach is “getting a lot of buzz”, though the book looks a bit stiff to me, and I think some people may be getting it confused with last year’s Freedom by Jonathan Franzen.

I picked up several galleys myself, including Sleight by Kirsten Kaschock, a book in which people dance about architecture, and The Dewey Decimal System, a suspense novel by Nathan Larson that ought to be popular among librarians. I spotted the shaggy-haired music writer Chuck Klosterman affably handing out copies of his new novel The Visible Man, which appears to be some kind of Wellsian or Doyle-esque science/mystery romp. I heard about new and upcoming books like Fathermucker by Greg Olear, Jerusalem Maiden by Talia Carner, Slingshot to the Juggernaut by Sander Hicks and Lucky Bruce, a memoir by Bruce Jay Friedman.

BookExpo creates serendipity. On Tuesday I ran into Duff McKagan of Guns ‘N’ Roses on the floor, and grabbed a preview galley of his upcoming memoir It’s So Easy (and Other Lies). The next day, strolling towards a corner where I hoped to find hot dogs for sale, I spotted Tom Wilson of the Ziggy comic strip (the son of the original Tom Wilson, now a Ziggy cartooonist in his own right) cutting into a big Ziggy cake for a cheering crowd. Most rewardingly, strolling past a publisher called Quest Books that specializes in religious titles, I spotted a book called Working Class Mystic: A Spiritual Biography of George Harrison by Garry Tillery. If you know anything about my alley, you know this is right up it. Quest Books wasn’t actually trying to give away copies of this book, but I cajoled one for keeps and promised to blog about it (I just did).

I was happy to meet for the first time three writers whose books I’ve enthused about here on LitKicks: Greg Ames (Buffalo Lockjaw), Andrew Shaffer (Great Philosophers Who Failed at Love), and the truly inspiring Vanessa Veselka, whose awesome novel Zazen is getting some real buzz (much better than the manufactured kind).

What else? I enjoyed hearing from Misha Glouberman, Kevin Smokler, Ben Greeman and Colson Whitehead at 7x20x21, a fast-moving speaker session that prevents boredom by pushing new slides every 20 seconds (though, in the case of a segment by Huge CEO Aaron Shapiro, the format was not enough to save him). I’m excited about One and Only: The Untold Story of On The Road by Jack Kerouac scholar Gerry Nicosia, a dogged researcher who managed to make contact with LuAnne Henderson, one of the major real-life characters behind Kerouac’s On The Road, who has finally revealed her own side of the famous story to Nicosia (LuAnne’s character, Marylou, will be played by Kristen Stewart in the upcoming movie). I also enjoyed chatting with this book’s publisher, the charming Brenda Knight.

I met Adam Mansbach, author of the popular new book for new parents to read to children, Go The F**k To Sleep, which is thankfully proving that it’s possible to publish a big hit “novelty book” that isn’t a damn zombie mashup.

The nighttime party scene was fun, of course, and I’m still exhausted from the weeklong hysteria. I met several other cool literary bloggers, and I’m happy to report that the litblog community is still alive and bringing in new faces (I’m skipping an associated “Book Bloggers Convention” taking place today, though; I just need a rest).

Perhaps my only disappointment was the lack of attention towards e-book technology, which is clearly the new horizon. I understand that several panel discussions at the conference were about e-books, but I didn’t want to hear people talking about e-books at this year’s BEA: I wanted to see what these publishers were doing to best tease out the creative possibilities of this new format. I didn’t see much to speak of here at all.

For all its literary splendor, BookExpo is a business conference, though I took a break from covering a lot of the business chatter this year. If you’d like to hear more about what went down, here’s a whole lot more to read.