The Curious Incident of the Metaphor in the Book 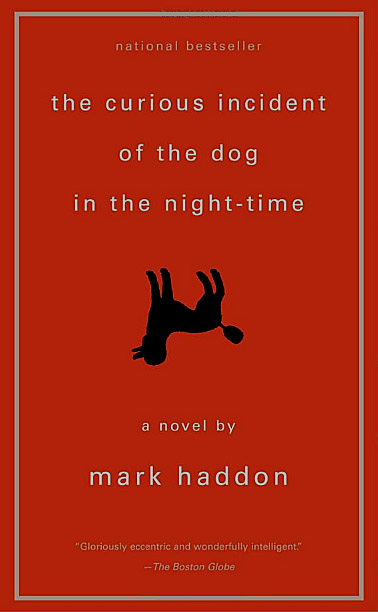 Autism is a psychological syndrome characterized by emotional shutdown. Severely autistic people shy away from human contact and social enjoyment, often absorbing themselves instead in repetitive tasks or private fascinations. They tend to be quiet but needy, warm but remote. They are not mentally retarded, and can be extremely smart and talented — in fact it’s hard to tell if autistic people are even victims of a disease, or rather just “different”. To use a grossly reductive simile (not a metaphor, just to clarify), an autistic person simply doesn’t seem to be running the same operating system as everybody else.

One of the better novels going around right now, Mark Haddon’s The Curious Incident of the Dog in the Night-Time

is a baroque spin on autism. It’s narrated by a brilliant British autistic teenage boy, who has been told by a teacher to keep a journal (in real life, the character of the boy is fictional, based on subjects the author worked with as a caregiver). The plot of the book is laid out in the first couple of paragraphs — a neighbor’s dog has been killed with a garden fork, and the narrator is determined to figure out who did it.

There’s a small cast of characters, all of them suspects in the murder: a father, a mother, a nasty stepfather, a dad’s girlfriend, a few odd neighbors. They are all highly flawed, to say the least. His dad is cheerful but quite dodgy, while his mother is loving but completely useless. We start to feel the panic this kid lives with everyday of his life — not just because he’s autistic, but because the people around him are truly such a mess.

The book is causing a sensation because of its realistic voice. It feels like a Nick Hornby novel told by the ‘Rain Man’. As we read, we sink into the funny world of an autistic mind. Here, certain colors are good, and certain other colors dangerous. Your numerous superstitions are enormously real, and you must consult with several environmental oracles before you make any major decision. On the emotional level, you are deeply vulnerable to and afraid of everyone around you. Most of your movements are defensive blocks. You are sad and lonely, but you do enjoy your things and your habits. Private time is nice. Math is comfort food — whereas food itself is a hazardous affair since you cannot eat two foods that touch each other on a plate.

The book is being marketed as a postmodern literary mystery, but I trust I won’t be spoiling anything when I say the book doesn’t actually offer much on the mystery front. We find out who the dog’s killer is halfway through the text, and the answer is simply blurted out to little effect. This is the author’s intention, though, because the book wants you to feel unbalanced, unsure of what’s going on. In short, the book wants you to feel autistic, and I think it succeeds.

The book is also timely, because there is an alarming rise in the incidence of autism. WIRED magazine author Steve Silberman wrote an influential article a few years ago claiming that autism and autism-related syndromes like Asperger’s were becoming modern epidemics in some parts of America, especially areas like San Fransisco where there are many scientists, computer programmers and engineers.

There are many new theories about autism and Asperger’s syndrome, and it is impossible to delve into this topic without pausing to question what it means for anybody, autistic or not, to live in our over-stimulating, over-stimulated world. The autistic response is a response many of us have used in certain situations. Block out the intruder. Strangers are dangerous. Touch is bad. Change is scary. Barriers are important. Mysterious forces control us, and only our routines and our rituals keep us safe.

Interestingly, Haddon’s The Curious Incident of the Dog in the Night-Time spends some paragraphs on a discussion of the words ‘simile’ and ‘metaphor’ (and I was just imitating the book’s narrator when I pointed out the difference between a simile and a metaphor above). The book drops several cultural/literary references, from Sherlock Holmes to Marilyn Savant, and it doesn’t seem much of a stretch to wonder if Haddon’s obsession over the word ‘metaphor’ were not a nod to Susan Sontag’s famous article.

I’d like to know what you think of the idea of autism as a metaphor for today’s prevailing sense of life.