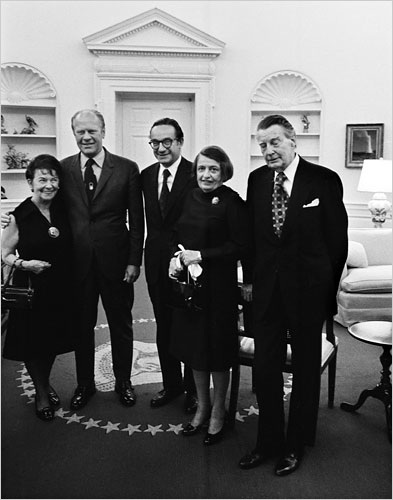 The Literary Kicks upgrade/redesign is progressing well. I’m on a rare family vacation out on Long Island, catching up on my reading and thinking (sometimes it feels great to just take in, to not be writing) and I’m looking forward to coming back refreshed in early September.

Meanwhile, up in the real world, some people are asking if Mitt Romney’s selection of enthusiastic Ayn Rand follower Paul Ryan as his running mate represents the closest Ayn Rand has ever come to the White House, the zenith of her influence on American politics. Actually, Ayn Rand has been in the White House, and in Congress, and all over Washington DC, for nearly 40 years now.

Ronald Reagan was a Randian (though the fiercely independent Ayn Rand herself refused to salute him back). Trickle-down economics — the idea that government policies should favor the wealthy, ignore the middle and lower classes and “allow the rising tide to lift all boats” — is Rand’s economic philosophy in action. This unfortunate and dangerous ideology, which culminated in the ruinous financial crash of 2007/2008, has dominated federal economic policy since the 1980s. Even the supposedly liberal administrations of Bill Clinton and Barack Obama have barely managed to make a dent in the trickle-down system. The fact that President Obama’s call for the wealthiest Americans to pay more taxes is controversial (I think it’s a no-brainer that wealthy Americans need to pay more taxes, and begin to pay off the deficit they voted for) shows the powerful presence of trickle-down policy in American economics today.

The photo at the top of this page shows Ayn Rand and her close friend and prize student Alan Greenspan, along with their spouses, visiting President Gerald Ford in 1974. Alan Greenspan had just been appointed chairman of Ford’s council of economic advisors, and would eventually go on to run the Federal Reserve Bank under Ronald Reagan. Greenspan was not a strict Objectivist — a strict Objectivist could never endure the endless compromises of real-world politics — but his vision of deregulated and hyper-charged American capitalism was highly consistent with Ayn Rand’s economic philosophy. That was nearly forty years ago. The important question today isn’t whether or not Paul Ryan intends to bring Ayn Rand into the White House. The important question is: what do we have to do to finally get Ayn Rand out of the White House, and out of Congress?

I first started paying attention to Congressman Paul Ryan two and a half years ago, when he began to emerge as the most articulate and authoritative of the conservative Republicans bitterly contesting Barack Obama and Nancy Pelosi’s health care reform bill. My discovery that this obvious rising star among the Republicans was a burbling Objectivist — he cited Ayn Rand as the greatest influence on his political thinking — was the single trigger behind my decision to begin critiquing Ayn Rand here on Litkicks. If it weren’t for Paul Ryan, I would never have published a book called Why Ayn Rand Is Wrong (and Why It Matters)

(which, I’m thrilled to say, is today #25 on Amazon’s list of bestselling books in the Political->Ideologies category, and #56 in the Philosophy category).

I feel energized rather than worried about Paul Ryan’s presence on the ticket, because I can’t believe the United States of America will vote for a candidate who wants to privatize Social Security, turn Medicare into a voucher program, raise taxes on the poor, cut taxes on the wealthy and cut not a single dollar from our bloated, gigantic, obscenely frivolous military budget. I feel that the world is finally beginning to understand the damage trickle-down economics can cause, and I like to think that my blog series and my little book has contributed some small amount to the public dialogue.

Or am I kidding myself? Will Romney/Ryan get elected, and continue the process of transforming our country into a militarized, impoverished nightmare from a Cormac McCarthy novel? I’d love to ask what you think, but I had to close comments on the site until the software upgrade completes. I can barely wait to continue our conversations in September.