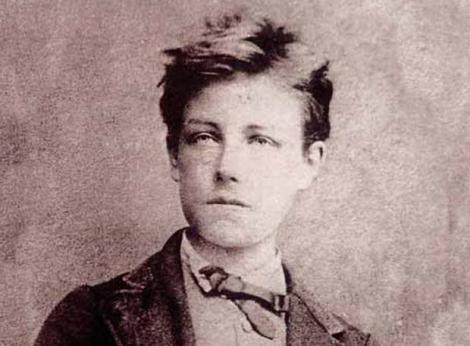 Jean-Nicholas-Arthur Rimbaud was born on October 20, 1854 at Charleville in provincial France. His family was abandoned by their father and forced into poverty. Intrigued by the conditions, the young Rimbaud would sneak out and play with the neighborhood children. His mother, horrified that her children might become coarsened, found the means to move her brood from the worst to the best part of town.

Madame Rimbaud showed little affection to her children, instead focusing her ambitions on her two sons. Forbidden to play with other boys, Rimbaud immersed himself in his studies. Stimulated by a yearning for more in life, he became a gifted student.

…You have to pass an exam, and the jobs that you get are either to shine shoes, or to herd cows, or to tend pigs. Thank God, I don’t want any of that! Damn it! And besides that they smack you for a reward; they call you an animal and it’s not true, a little kid, etc..

In 1870, restless and despondent over the loss of his favorite teacher (who’d left to fight in the Franco-Prussian War), Rimbaud ran away from home. He ran away more than once before finally making it to Paris. Broke, Rimbaud lived on the city streets. Immersed in his rebellion, he denounced women and the church. He lived willingly in squalid conditions, studying “immoral” poets (such as Baudelaire) and reading voraciously everything from occult to philosophy.

His own poetic philosophy began to take shape at this time. To Rimbaud, the poet was a seer. His job was to jar and jangle the senses. A precursor to surrealism, Rimbaud is also considered to have been one of the creators of the free verse style.

In 1871, Rimbaud met Paul Verlaine — who was ten years his senior — and moved into his household. If their friendship was controversial, their sexual relationship was downright scandalous. Though Verlaine vacillated all his life between dark-doings and repentance, Rimbaud was considered at that time to be Verlaine’s undoing. Rimbaud’s drug taking and generally unclean living eventually alienated everyone except Verlaine. In 1872, Verlaine left his wife. He and Rimbaud moved to London.

By 1873, Rimbaud was disenchanted by his relationship with Verlaine. During a drunken argument in Brussels, Verlaine shot at Rimbaud, hitting him once in the wrist. Rimbaud was tired of their downward spiral and called in the police. Verlaine was sent to prison for 18 months. Rimbaud, feeling both guilty and exhilarated, wrote feverishly, completing ‘A Season in Hell.’

Before his twentieth birthday, Arthur Rimbaud quit writing. He wandered Europe before eventually becoming a trader and gunrunner in Africa. Ill, he returned to Marseilles in June of 1891. His right leg was amputated, probably due to the complications of syphilis, and he was nursed for a time by his tender sister Isabelle. He died on November 10, 1891.

Rimbaud’s literary style has influenced almost all modern forms of literature, including the Beats. He has been cited as an inspiration by songwriters like Jim Morrison and Bob Dylan. Patti Smith has often referred to him in her poetry and songs.

rimbaud. no more the daring young horseman of high abyssinian plateau. such ardor is petrified for-ever.
(from “rimbaud dead” by Patti Smith)