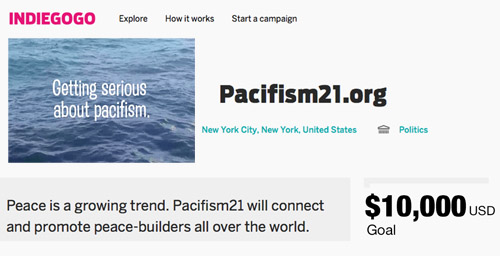 My friends, we’re ready to show you the secret project we’ve been cooking up for nearly a year. Literary Kicks is happy to announce that we are founding a new non-profit organization, website and social media presence called Pacifism21.

To find out what the name means, and to watch the cool video I directed myself (yes, I got my Scorsese on — are you talking to me?) please go to our Indiegogo page and, for God’s sakes, please donate some money to this worthy effort.

If you are visiting me here on Literary Kicks, you know that the websites I build are built to last. This new project, a long-awaited spinoff from the Philosophy Weekend series that we closed down for improvements a year ago, is an attempt to construct a platform for a serious discussion of global politics and ethics from an existential and empathetic point of view.

Most importantly, Pacifism21 and the website Pacifism21.org are designed to fill a need, and to energize the already fast-growing community of smart pacifists around the world.

Indeed, one of the great benefits of the Philosophy Weekend series I ran on Literary Kicks for five years (in which many of our ideas about pacifism were debated, developed and significantly improved) was that I was able to make connections with thoughtful and idealistic people all over the world: in Italy, in Oklahoma, in Finland, in Iceland, in Mexico, in Turkey, in Greece, in Pakistan, in Iran, in Australia. I learned that pacifism is quietly bubbling in a lot of different pockets all over the world. People are getting smart. It’s time for a change, and Pacifism21 will help to nudge along this change.

There’s a long explanation of the objectives of Pacifism21 on our Indiegogo page, as well as a little section titled “What is Pacifism?” that I hope will be helpful. I’ll quote it in full here.

Pacifism does not have to be an absolute position: it is simply the belief that less war is better than more war. When there is a global conflict (say, in the Middle East today), a pacifist will tend to support peace talks over military escalation. When voting for a candidate, a pacifist will tend to support less military spending, and will be turned off by “let’s bomb them!” rhetoric.

A pacifist is not against all reasonable self-defense, and does not have to believe that the problem of war can be solved completely. US President Dwight David Eisenhower was stating a pacifist position when he said these words:

“In the councils of government, we must guard against the acquisition of unwarranted influence, whether sought or unsought, by the military–industrial complex.”

Eisenhower was also one of the toughest military leaders of the 20th Century, and led the invasion of Europe to defeat Hitler during World War Two.

Pacifism is a broad position. A pacifist may be left wing or right wing, liberal or conservative, capitalist or socialist, Occupy or Tea Party, Christian or Jewish or Muslim or Buddhist or Hindu or agnostic or atheist. A pacifist does not have to reject violence 100% of the time, does not have to dress like Mahatma Gandhi, is not required to sing folk music.

If you declare yourself a pacifist, you are joining a practical movement to reduce the incidence of military escalation around the world. It’s a common-sense idea: the idea that war is a terrible disease that we ought to try to cure, and that we ought to be able to cure.

That’s what pacifism is, and I hope you’ll agree with me that the time is ripe for an awakening of pacifist awareness all over the world — not just in a geopolitical sense but also in a personal, psychological or spiritual (take your pick) sense.

But let’s be real: “pacifism” is an important word that is often misunderstood, and a nonprofit organization devoted to pacifism is not an easy sell to potential funders. Nor is it a slam dunk (far from it) on Indiegogo. It will not be easy to raise $10,000 for pacifism in 2015. This is why we need your help.

If we can raise $10,000, that will really show the kind of support that is out there for the important idea, an idea that is all too easy for the world to forget.

This is why we really need you to donate, and any amount you can give will be very much appreciated. Please check out our Indiegogo page and see what we’re up to. If you like what you see, please make it rain.