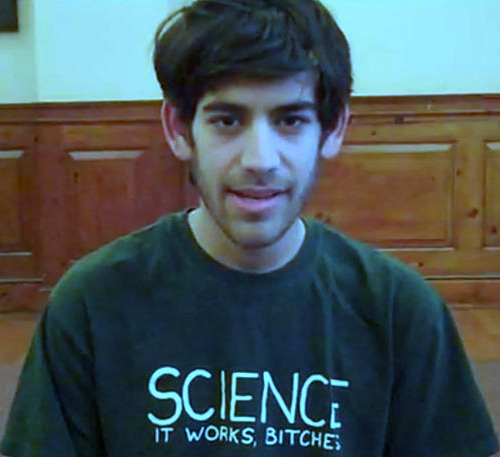 There are few reading experiences more heavy than this. After hearing about the shocking suicide of 26-year-old techie activist Aaron Swartz, who spent his last two years fending off a Javert-like criminal pursuit for a trivial copyright violation, I read a seven-part “self-improvement” blog series he wrote on his blog five months ago, titled Raw Nerve. Here’s the series landing page:

This is a series of pieces on getting better at life.

1. Take a step back
2. Believe you can change
3. Look at yourself objectively
4. Lean into the pain
5. Confront reality
6. Cherish mistakes
7. Fix the machine, not the person

The best posts are probably 2 and 4.

These words reveal a lot about Aaron Swartz. He was a sensitive, curious and eager young man. He had a clean, direct and personable writing style. His thoughts about how to get better at life are not at all pained or self-critical — rather, he yearns to explore his potential for courage, for ambition, for self-directed change. He was particularly influenced by a business psychology book called Mindset: How You Can Fulfill Your Potential

by Carol Dweck, and gripped by the idea that our best opportunity for continual self-improvement is to make it a habit to channel our failures into growth opportunities.

The first step to getting better is believing you can get better. In her book, “Mindset”, Dweck explains how to start talking back to your fixed mindset. The fixed mindset says, “What if you fail? You’ll be a failure.” The growth mindset replies, “Most successful people had failures along the way.”

Now when I first heard about this work, I just thought: that’s nice, but I already do all this. I believe fervently that intelligence can change and that talents can be learned. Indeed, I’d say I’m almost pathologically growth mindset. But even I began to notice there are some things I have a fixed mindset about.

But as I’ve grown, I’ve found that’s hardly the end of the story. I’ve started to get good at leading a conversation or cracking people up with a joke. I like telling stories at a party a story or buzzing about a room saying ‘hi’ to people. I get a rush from it! Sure, I’m still not the most party-oriented person I know, but I no longer think we fit into any neat introversion/extroversion buckets.

Growth mindset has become a kind of safe word for my partner and I. Whenever we feel the other person getting defensive or refusing to try something because “I’m not any good at it”, we say “Growth mindset!” and try to approach the problem as a chance to grow, rather than a test of our abilities. It’s no longer scary, it’s just another project to work on.

Aaron Swartz’s death is a terrible tragedy, and it presents a failure that the world can learn from. A Wall Street Journal article about his (shamefully trivial) criminal case reveals that prosecutors were bullying and tormenting him beyond what could possibly seem reasonable, and that he’d had an upsetting session with them only two days before his death.

I don’t know why Aaron Swartz killed himself, but my guess is that he committed an emotional and impulsive act of revenge against the prosecutors. I believe that suicides can often be best explained as acts of desperate rage, as (misguided) attempts to wring satisfaction from no-win situations. It’s the losing hand you slam down when you have no winning hand to play.

Many people who knew Aaron Swartz speak of his struggles with depression. They knew him and I didn’t, but I see more rage than depression in his final terrible act. In this sense, he did effectively communicate his message. No matter how inhumane the prosecution team that bullied him was (and they appear to have been pretty inhumane), they cannot possibly avoid feeling guilt and shame and self-doubt today. Aaron Swartz made his point and “won” his unwinnable case, at the worst possible cost.

Do Aaron Swartz’s blog posts about self-improvement help in any way to explain his suicide? I think they help to explain Aaron Swartz, but they don’t help to explain his suicide. I don’t think he was “leaning into the pain” when he hung himself. If it was an act of rage, I only wish he had been able to resist going through with it, so that he could have returned to his better project of improving himself. And, I wish I could have had a chance to meet this remarkable young man.