A Journey Of Voice 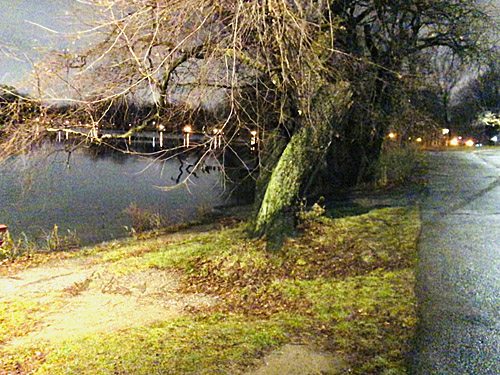 I took a walk through Prospect Park today. These hilly acres in the middle of Brooklyn were designed to get you lost, with swerving paths that make you think you’re walking in a definite direction as they subtly turn you back again until you pass the spot where you started and realize you’ve turned completely around. If you ever tried to walk Prospect Park without a map you know what I’m talking about. If you ever tried to walk Prospect Park with a map you probably know what I’m talking about too, because that map really isn’t going to help. It’s kinda like life, and there are plenty of ways to get lost outside of Brooklyn too, whether you carry a map or not.

At one point I found a good tree stump to sit on and spent a few moments in a reverie of end-of-year contemplation, or end-of-decade contemplation. We’ve lived through some tumultuous and exciting times. I began by thinking about the music, movies and books of the last ten years. I decided the 2010’s were a good decade for music, and I resolved that the musical crown of the decade should go to five very original women singers who kept it real: Beyonce, Rihanna, Lady Gaga, Nicki Minaj and Cardi B. This decade sounded just fine.

Movies, though? I don’t know. The best stuff was on TV. Breaking Bad, It’s Always Sunny in Philadelphia, Broad City, Black*ish. I can’t really think of any movies I liked as much as several TV shows.

Books? I don’t know. I felt more sense of a coherent collective global literary mission ten years ago, when litblogs were hot. I can name lots of amazing novels from the first ten years of the new millennium, but not as many from the second decade which ends in nine days. I bet the fault is my own; I didn’t try as hard to love novels during the last few years as I did when I was blogging about books three or four times a week. I’ve been immersing myself in the 19th century — novels, histories, operas — and I have to admit that I haven’t read much new stuff lately as I should. I’ll try to do better in the next ten years.

Politics? Oh yeah, politics. This was the decade that brought my government’s total collapse and replacement by an absurd, toxic parody of an honest administration. This was the decade in which fascists, white supremacists, hedge fund managers, Ayn Rand acolytes and just plain mean and miserable people all over the world came together to define a new global political order: greed on top, war everywhere, guns pointed in faces, lies and propaganda flying through the air. These are ugly years to live through. I think my own country needs a successful impeachment and removal of Trump and Pence, and I hope the spirit of change that follows this removal leads to a broad peaceful revolution that puts people in power. I think the entire world needs a major spiritual or philosophical awakening to prevent our collective suicide. I’m enough of an optimist to believe we can work together to make these positive changes a reality, and soon.

As this decade ends, I find myself doing a lot better myself than my sick country and my troubled world. I actually had an amazingly good year in 2019, a year of change sparked by a decision I made one year ago to turn my creative attention to a completely new medium: podcasting. This was a seemingly random decision that I made so quickly I even surprised myself — though, admittedly, I have a tendency to enjoy surprising myself. I seem to have been born with an eternal craving for novelty, and I always make big decisions fast. My decision to apply my creative skills to the medium of podcasting turned out to be the starting point of a major journey for me — a journey of voice. Unexplored creative territory. Mysterious stuff to find.

I launched two podcasts in early 2019. The one that means most to me is the monthly talk show for World BEYOND War, a nonprofit organization I’m working with in several ways. We released ten episodes this year, most of them about an hour long, each revolving around a specific aspect of peacebuilding or antiwar activism. The latest episode is a roundtable on the recent regime change in Bolivia featuring economist Ivan Velasquez calling in from La Paz along with two of the leading antiwar activists in the world today, Medea Benjamin of CODEPINK and episode co-host David Swanson of World BEYOND War. I’m very proud of this episode, and of every one of the ten episodes we put out this year. 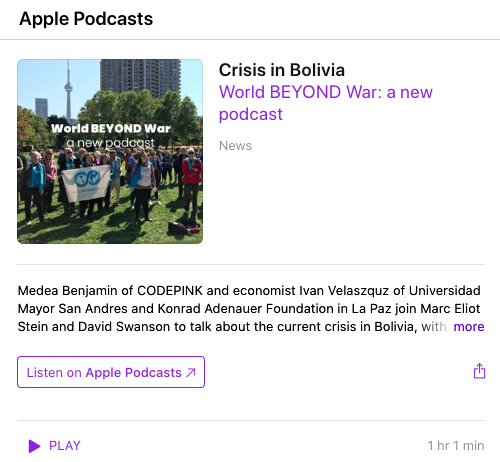 The second podcast I launched in early 2019 is an experiment. I got into opera a few years ago the same way I got into podcasting last year: fitfully and obsessively, because that’s the way I always enjoy living my life. This podcast is pure fun for me, nothing but fun and the joy of sharing and talking about music, theatre, literature and history. I only got 5 episodes of Lost Music: Exploring Literary Opera out in 2019, but I’m thrilled to report that the podcast has caught on with listeners, and even though I haven’t put one out since the summer, it’s been getting significantly more traffic every month than the month before since then. Season 2 of “Lost Music” kicks off first thing in January of next year! 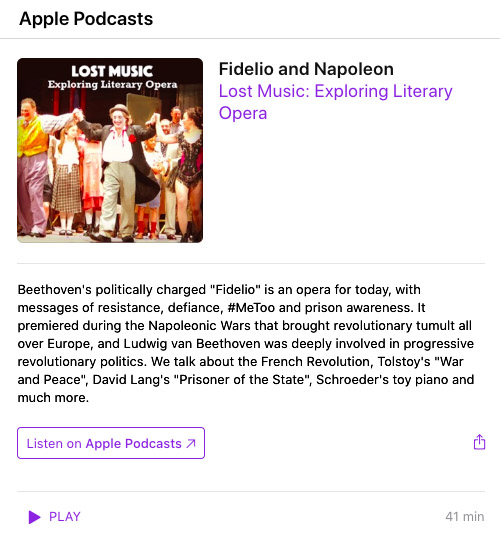 Literary Kicks had its 25th anniversary this past year, though I didn’t call much attention to this milestone because Litkicks feels so fluid to me at this very moment, as I delve deeper into a new format that allows me to assemble my thoughts and ideas as auditory signals pumping into ears, instead of visual glyphs observed by eyes. I’m on a journey of voice, and the middle of a journey is not a moment to reflect on the past. I’m so glad Literary Kicks is still morphing into stuff that’s new. That’s the only way I ever want it to be.

A few other thrilling things happened to me this year. I went to Ireland. This was a very rare transcontinental adventure for a guy who more often travels within the recesses of his own mind — and, naturally I turned it into a literary trip.

Here I am on top of the tower at Sandymount Cove, the very place where stately, plump Buck Mulligan bantered with Stephen Daedelus during a morning shave, kicking off the first page of Ulysses by James Joyce. 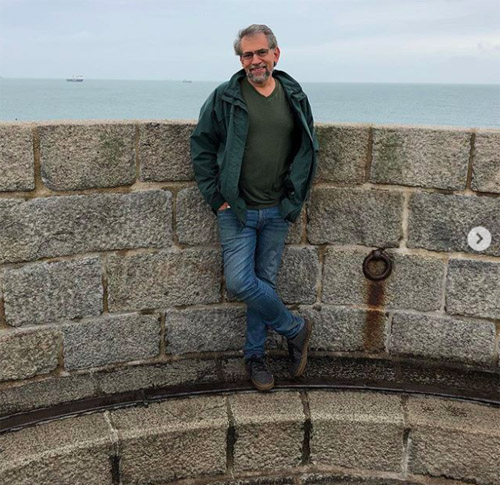 A friend in Sligo took me to Yeats’s grave. I visited the adjoining church and wondered if the centre will ever hold as the widening gyre turns. 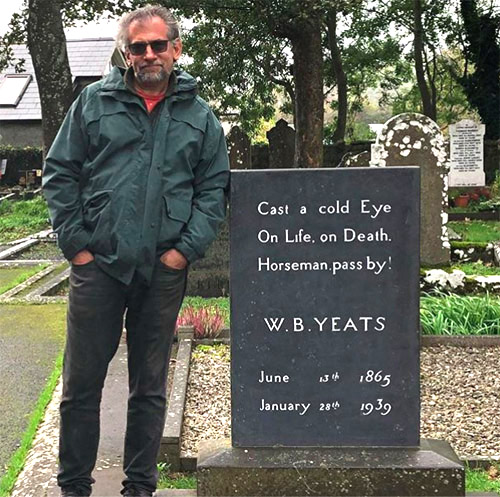 Most special of all, closer to home, in October my daughter Liz and her husband Chris had a baby. This is my favorite picture of the year. 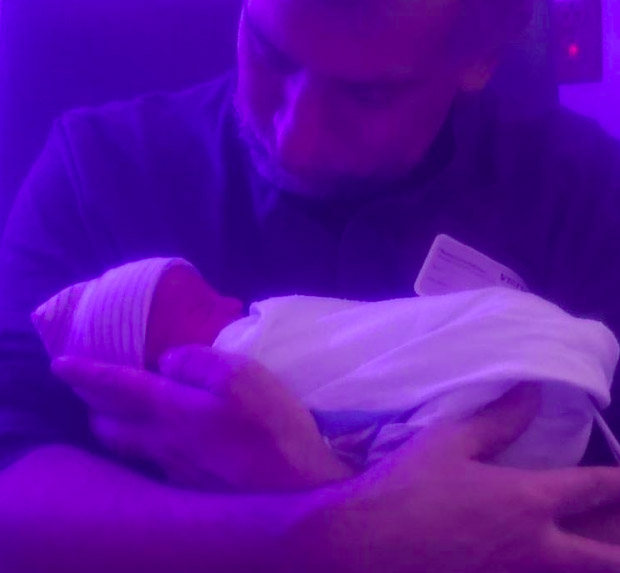 Happy new decade, people of earth. May we do better in the next ten years than we’ve done in the last? I know we can, and we will. In peace, together.

And if you really want to know what I think of the Cats movie, you can check my Twitter.