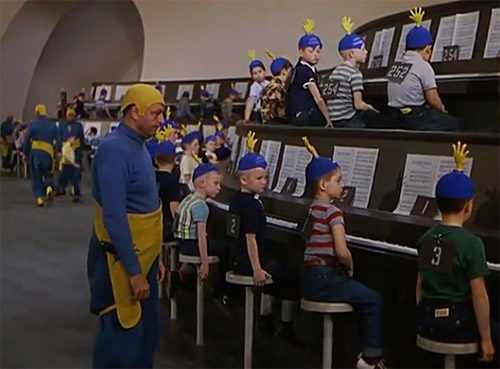 Caryn and I watched an old movie on cable TV recently that left us traumatized for days. Ironically, the movie was trying to be a light-hearted and whimsical children’s musical. It was written by Dr. Seuss in 1953. The movie left us traumatized because it was so very, very bad.

I’m talking about the legendary but little-watched 5000 Fingers of Dr. T, a live action film about a boy who hates his piano teacher. This was the only movie Dr. Seuss ever tried to make, and it went over so badly with audiences in 1953 that he never tried again, and the movie nearly disappeared from view. It was almost crazy and psychedelic enough to gain a second life as a midnight cult flick, but it’s too excruciatingly boring for the midnight circuit. It’s hard to watch without wincing … often.

5000 Fingers doesn’t start out too badly: a sweet kid is suffering through a piano lesson in an antique parlor (this setting must recall Theodor Seuss Geisel’s own childhood in Springfield, Massachusetts). The boy falls asleep and has a bad dream in which he’s persecuted by his nasty piano teacher, Dr. Terwilliker, who is also scheming to marry the kid’s widowed mother. In this dream, the kid wears a glove on the top of his beanie, is chased by weird chubby thugs in brightly colored suits who resemble proto-Oompa-Loompas, dodges a pair of roller-skating old men sharing a common beard, and is forced to participate in a 500-kid piano performance on a swirling 5000 key piano.

I assure you that I just made the movie sound better than it is.

The concept is gigantic, and the visual effect does evoke Dr. Seuss in its curvy and biomorphic shapes. But everything about the production feels off. The set design falls short, relying on cheap-looking stage furniture that might work on a Broadway stage, but doesn’t look right on film. The acting, unfortunately, is even more wooden than the sets. As the piano teacher villain, character actor Hans Conreid sticks his nose in the air and flares his nostrils for the length of the movie. The low point of the movie is probably a long, pained tango between Dr. T and a dopey plumber who is completely unconvincing as the male hero.

Even at moments like this, the cinematic ambition is clear, and I can imagine the film crew standing around, stunned, while the film was being made. “This is either going to be a masterpiece or a complete stinker,” they must have said to each other. They were right.

Donald Pease’s biography of Dr. Seuss (reviewed here in 2010) sheds some light on how this film managed to get the chemistry so wrong, at least from its star author’s point of view.

Geisel wrote the lyrics, screenplay and sketchbooks for the film, which he desparately wanted to be a success. But the producers’ repeated demands for revisions led to his loss of control over the production. The final cut was worse than he feared.

5000 Fingers of Dr. T is easily identifiable as a Dr. Seuss work, as it presents one of his archetypal plotlines: a brave, vulnerable kid battling a corrupt adult. It differs in one significant way, though: here, the surreal “Suess World” is a dream state, whereas in Dr. Seuss’s books, the Suess world is simply the book’s reality.

But there’s nothing wrong with dream-state fantasies (think of “The Wizard of Oz”). Something went wrong with some very good ingredients here, though, and there must be a life lesson for all ambitious writers in the obvious failure of this collaboration. I think the lesson is more about process than about substance. There probably was a great movie hidden inside this disaster, but the filmmakers failed to bring it out.

Why did The Wizard of Oz succeed so well with many of the same ingredients — a villain, a kid hero, a long dream sequence — as this frilly mess? Some of the difference is the luck of the draw: Margaret Hamilton brought it as the Wicked Witch, while Hans Conreid lays an egg as Dr. T. Yip Harburg and Harold Arlen wrote amazing songs for The Wizard of Oz, but 5000 Fingers sounds like musical pap.

Still, these kinds of limitations should not have to be fatal flaws. A movie’s creative team should have the flexibility and imagination to detect and fix problems like these in real time, as production proceeds. It’s interesting to imagine what other movies Dr. Seuss might have eventually made if this bad experience hadn’t sent him back to the solitude of the book-writing life, never to try again. Could this strange film have possibly realized its potential? We’ll never know.