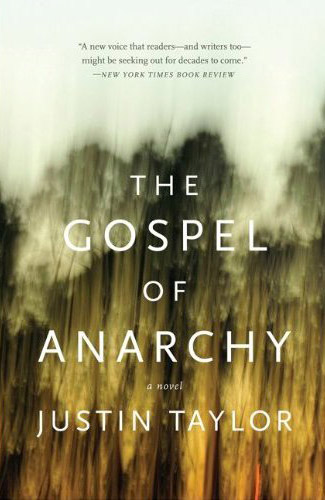 The Gospel of Anarchy

, a thoughtful new novel by Justin Taylor. begins with David, a brainy but fashionably bored college dropout who has pretty much run out of ideas about what to do with his life and has lately been spooking himself by posting photos of an ex-girlfriend to an amateur porn message board. A chance meeting changes everything: David runs into his old elementary school best friend Thomas scrounging for food in a dumpster while a beguiling punk girl named Liz acts as lookout. The falafel they get here tastes good, Thomas and Liz explain, and when David takes a bite it’s an epiphany:

I took the biggest bite I could and stood there dumbly, chewing and being watched. It was drier than I’d thought it would be, and sucked up the moisture in my mouth. It tasted okay, other than not being an especially impressive falafel sandwich, which, of course, having been a customer there, was no more and no less than I already knew. No rancid aftertaste, indeed no hint at all of its having turned. The punks were right. It was fine. I swallowed.

Much of the activity in the second half of this fast-moving novel revolves around Parker’s sacred book — something between the Book of Mormon and Phish’s Helping Friendly Book, apparently, which the members of the Fishgut family/cult/art project eventually distribute as, naturally, a stapled zine (the story takes place in 1999; if it was today they’d be 140-ing it).

Various characters argue, the religion takes off, a few souls are consumed by holy visions, and Justin Taylor’s story eventually follows a familiar arc. From Louisa May Alcott’s Transcendental Wild Oats to Richard Brautigan’s In Watermelon Sugar, we’ve been watching communes burst apart — and The Gospel of Anarchy eventually ends where every commune story or punk/anarchist saga must end: in chaos and bittersweet regret.

But Justin Taylor is a lively, tricky writer, and The Gospel of Anarchy raises enough tough questions — about the authenticity of religious texts, about the types of people who join cults and the types who don’t — to make this novel an intellectually bracing read even when the storyline follows a well-worn path. Justin Taylor, who has also published short stories and tattoo books, knows his subcultures well, and most importantly he takes their believers seriously. Here’s my first recommended novel of 2011 (it’s been a slow year) — The Gospel of Anarchy by Justin Taylor.