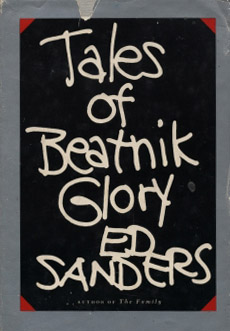 Volume I of Ed Sanders‘ ‘Tales Of Beatnik Glory’ was originally published by Stonehill Press in 1975. This new edition from Citadel Underground, replete with jacket blurbs from Messrs. Burroughs and Ginsberg, and an excellent Introduction by the author, adds Volume II for a total of 32 tales about the beatniks and proto-hippies of New York’s Lower East Side in the late ’50s and early ’60s. Each story stands on its own, but they also progress chronologically and build on one another to create a picture of the time, place and style of life which Sanders experienced first hand as a founding Fug, peace activist, publisher of Fuck You: A Journal Of The Arts, and proprietor of the Peace Eye Bookstore.

A word here about Citadel Underground. With the motto, “challenging consensus reality since 1990,” this series is “dedicated to bringing back into print lost classics and to publishing new works that explore pathbreaking and iconoclastic personal, social, literary, musical, consciousness, political, dramatic and rhetorical styles.” Among the initial offerings are Mezz Mezzrow’s ‘Really The Blues’, Emmett Grogan’s ‘Ringolevio’, Terry Southern‘s ‘Red Dirt Marijuana’, and Ray Mungo’s ‘Famous Long Ago’. (A good review of these and other Citadel Underground titles can be found in the Summer ’91 issue of The Review Of Contemporary Fiction.)

With all the Raymond Carver imitations and latest university writing program first-book short story collections on the market, a publishing venture of this sort can’t help but be refreshing. And ‘Tales Of Beatnik Glory’ is a particularly great find for its well-written, innovative stories by someone who writes his own way and makes it fun. The reader may start out wondering at Sanders’ titles — “The Cube Of Potato Soaring Through Vastness,” “Vulture Egg Matzoh Brei,” “Siobhan McKenna Group Grope” — and the fact that the stories actually fit them. Sanders’ way with words and sense of timing build some very funny bits of fiction. His approach is playful and serious at the same time. He has a light touch but a sting. He is in love with word play and uses funny, innovative and enlightening word combinations to bring language alive and open it to new possibilities.

As the tales progress a central protagonist emerges in Sam Thomas — poet, film maker and peace activist — Sanders’ most nearly autobiographical character. With Sam and his co-conspirators the reader experiences the joys and sorrows of mimeograph printing, poverty cuisine, and “exclusive relationship — that is, a pact of mono-grope relative to groin clink.” Infusing the tales is Samuel Beckett’s message as interpreted by Sam Thomas, “Scrape, scrape, chew, chew, persist, persist,” coupled with Ezra Pound’s dictum, “Make it NEW!”

In the early story, “Chessman,” about the 1960 California gas chamber execution of Caryl Chessman, we learn that “Sam had never before considered that he would ever take part in a protest march.” But … “as a first experience, it filled Sam with an unutterable urge to march again, to sing again, to protest again. Here was an opportunity to confront the pieces of shit that had ruined it all.”

The decision to become politically active is all but forced on Sam. There is no sand deep enough in which to bury his head. Thus in Volume II the focus is much more on the nonviolent direct action commitments of Sam Thomas and most of the other main characters during the AEC sit-in, March on Washington, and Mississippi freedom summer. The spirit of Kerouac is evoked in characters like the five-year-old novelist, On The Road Mulligan, and Eric Balin, “the Ajax of Ahisma,” but this spirit and energy is transformed into action for peace and social change.

Still there’s lots of kinky sex and other fun. A great nostalgia for the sex and drug mores of those less complicated times runs through the book. And the Marx Brothers spirit of the b. g. is very much in evidence. “Party while suffering!” is the motto of Volume II.

The idea of “beatnik glory” starts out as ironic, even oxymoronic. But as the ’60s unfold, lines are drawn and sides are chosen, the characters become more grounded and more alive. And there turns out to be a good deal of glory after all, real solid stoned beatnik GLORY. The best of these stories deliver the shivery feeling that it’s all a miracle, and all preordained, and all working out for the best.

Only a couple of complaints about this book: 1) Way too many typos. In a book that uses word combinations like “farbrente meydelekh” and plays around with typography as much as this one does, the publisher owes it to the reader to at least spell words the same each time. The typos start out as annoying and are so frequent that at times the reader’s confidence in the text is undermined; 2) I think ‘Tales’ would be better packaged and marketed as separate volumes, especially if Vol. III is in the offing, as Sanders has indicated. In its present bulky format it can be a bit daunting, especially to the uninitiated. Separate, less expensive volumes would help it find the wider readership it very much deserves.