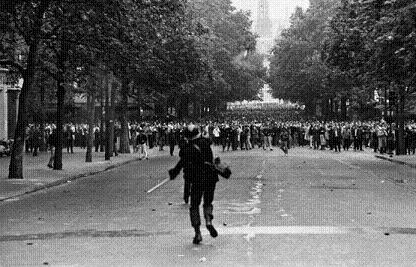 Our Paris correspondent tells us of what shook France, and perhaps all of Europe, forty years ago this month. — Levi Asher

It’s spring of 1968. France has emerged from post World War II reconstruction with an economy that is strong and growing. Consumer goods are plentiful, and France’s gross domestic product has surpassed that of Britain for the first time in 200 years. Charles De Gaulle is president. France is a major world power. All is right with the world. Or is it?

The late 1960s also coincided with the coming of age of a population explosion, those children born between 1945 and 1965, after the Second World War. This new generation of young people was coming up against a French society that had not changed, despite economic growth, for hundreds of years. French society was authoritarian. The public morality was conservative. Religion, patriotism and respect for authority were the values of the adult generation in France in 1968.

By 1968 the number of university students in Paris had grown to over 500,000, twice as much as a decade before. To accommodate this overpopulation, the government built a series of soulless, cement university buildings among the shanties and desperate poor Parisians of the suburb of Nanterre. Overcrowding, male-female visitation issues, and criticism of the Vietnam war led to protests that culminated in the taking of the Administrative building at Nanterre on March 22.

The takeover was spearheaded by a group of radical students that would come to be called the “Movement of March 22”, led by Daniel Cohn-Bendit, a German sociology student and anarchist soon to be known as Dany the Red. Trouble continued at Nanterre, and the government decided to close the school on May 2. Student militants called a meeting at the Sorbonne to protest this closing and discuss further action.

The meeting was held on Friday, May 3. Although it started out in the morning with only three hundred student activists, by afternoon the Rector of the University called in the police out of fear of a potential confrontation between the leftist students and a group of right-wing “fascists”. Noting the presence of Cohn-Bendit, the authorities did not want the Sorbonne to become another Nanterre. They used the inevitable altercations with the police as an excuse to arrest some 500 students. News of the arrests spread through the Latin Quarter and sympathizers began to swell the ranks of the original group, many trying to free the arrested students from the grasp of the police. By evening full scale fighting had broken out, and rocks and teargas grenades flew over the Boulevard Saint Michel. This was the beginning of the events known as “Mai 68”.

On Monday, May 6, UNEF, France’s largest student union, called a march to protest the actions of the police. More than 20,000 teachers and students marched toward the Sorbonne, which was closed off by the forces of order. They were met by police wielding truncheons and tear gas, and hundreds of students were arrested. On Friday, May 10 an even larger crowd formed in the Latin Quarter, and when riot patrols prevented them from crossing over to the Right Bank, the students threw up barricades and battled the police until dawn, throwing rocks and bottles, while the police used tear gas and clubs. The events were reported on radio and television, and public sympathy was heavily in favour of the students after seeing their brutal treatment at the hands of the authorities.

The French Labor movement and the Communist Party, which had so far held the students at arm’s length, now decided to show their support, and the CGT, the major French labor organization, called a one day strike for Monday, May 13. Over one million people marched in Paris. The French Government, which had so far tried to contain the students, hoping the rebellion would run out of steam, now began to see the spectre of general national strikes that could paralyze France. Prime Minister Pompidou acceded to the three demands of the students: the dropping of charges against the students arrested in the prior demonstrations, the re-opening of the Sorbonne, and the removal of the police from the Latin Quarter.

The capitulation to the student demands came too late. The genie of revolt was now out of the bottle. The university students had already been joined by their juniors, the lyceens (high-school students), in the demonstrations. Now, the young workers — the working class contemporaries of the students — inspired by the actions of their student brethren, began striking and taking over factories all over France. On May 14, workers struck Sud Aviation near Nantes and occupied the plant. A wildcat strike followed on May 15 at the Renault plant at Cleon. The strikes quickly spread to the Renault factories at Flins and Boulogne-Billancourt.

These actions were instigated by the rank and file, not the union leadership, and the union leaders had to struggle to maintain control over the waves of strikes sweeping the count. While the union leadership tried to keep the focus on demands for higher wages, the radicalized workers were calling for, among other things, an end to the De Gaulle government. By the following week, ten million workers were on strike, roughly two-thirds of the French work force. In the meantime the students had occupied the Sorbonne, the Odéon theatre and the School of Fine Arts. Red flags and posters of Marx and Chairman Mao covered the walls. Slogans like “It is Forbidden to Forbid” (Il est interdit d’interdire) were plastered on posters all over the Latin Quarter. Calls for the end of the De Gaulle regime and a government of the people were being heard from all quarters.

On May 25, the Government drafted and signed, with the union leaders, the Grenelle accords. The agreement called for an increase of 25% in the minimum wage and a 10% salary increase. The workers were not impressed, even though the terms were comparatively generous, and continued to strike. On May 30, the CGT led a march through Paris, chanting “Adieu, De Gaulle.” François Mitterand and Pierre Mendes France both jockeyed for position to lead a new leftist government. It looked like the De Gaulle government was dead.

But Charles De Gaulle had one more trick up his sleeve. On May 29 he “disappeared”, flying to an airbase in Germany. During this period, he assured himself that he had the backing of the army in case of a full out revolution. Satisfied that the army was still behind him, he returned to France, and went on the radio May 30. He announced the dissolution of the government, with new elections to be held the 23rd of June. He urged the French people to stop the strike and return to work. After a month of turmoil the French were ready for an end to the events of May. The students ceded the Sorbonne to the administration, and by mid-June the strikes were over. In the elections of June 23, the Gaullist party came back stronger than ever. The dream of a people’s government was dead.

Looking back at the events of May, 1968, we see that France came very close to a complete social and political revolution. The fact that the students did not push further, along with the fact that the traditional left, such as the Communist Party and the CGT did not completely support the students perhaps explains why total revolution did not occur. However, the Gaullists gained seats in the June elections, to the detriment of the Left. Were the events of May meaningless?

No, because even though the political gains of the left were minimal at best, the social gains of the workers were impressive. Not only did they achieve wage gains above those of the initial Grenelle accords, but many in France today speak of May 68 as being a “break”, where France passed from the old, authoritarian society to the liberal morality of France today, where equality, sexual freedom and human rights are the watchwords. It was the students who engineered the shift in values. The “soixante-huitards” (68ers), as they are called, awakened France to the cultural values of love, peace and tolerance that were sweeping the world at the time, and this point in history marks the beginning of continuing changes in French society.